Can we have the suggested questions' titles parsed by default?

The suggested questions' titles here are not parsed:

I find this a bit odd, because they are indeed parsed in other scenarios, like this: 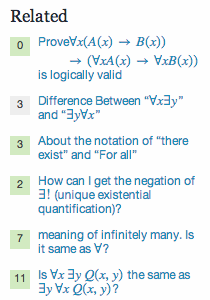 Why aren't the titles parsed when suggesting questions? I think it would be very useful to have them parsed by default.

I've included a fix for this issue in the Stack Overflow Unofficial Patch v1.2. It turns out to be very simple — I just need to tell MathJax to re-typeset the titles after they're loaded via AJAX. The code that does this in SOUP is:

where hookAjax() is a wrapper around $.ajaxSuccess() that I use to inject code into the SE framework's AJAX handling.

ps. The next version will also include a fix for the related issue on the user profile page pointed out by Karl Kronenfeld in the comments. I missed that comment originally, which is why it's not in v.1.2.0 yet.

You can use Robjohn Chatjax links to parse it. You can get it here: https://math.meta.stackexchange.com/a/3297/19341

Clicking "start Chatjax" after you entered your title get's you

And as an extra, it even works at the arxiv...

Not the answer you're looking for? Browse other questions tagged bug mathjax asking-questions titles editor .

2
Removal of upper limit of questions you can ask
1
How should multiple how-to questions' titles about the same topic differ?
28
Using MathJax/TeX in the titles of questions - yes or no?
25
To the editors: strip “Proof”, “Help”, “Question”, “Problem”, etc. from titles on-the-fly
46
Should the site have an automatic word filter for titles?
21
Should one rename questions with titles not unique enough?
2
MathJax snippets for editor?