As a test I tried doing this:

which, of course, didn't work. I couldn't find a guide of any sort so I'm sorry if this is unnecessary.

Thank you in advance.

For the most part, they aren't. The tree/graph/graphic packages for TeX are not supported by MathJax. From their site:

Keep in mind that MathJax is meant for typesetting math on the web. It only replicates the math functionality of LaTeX and not the text formatting capabilities. Any text formatting on the web should be done in HTML and CSS, not TeX.

I'm quite sure I've read a few posts on the MathJax mailing list that stated that tikz-like features are not among the goals of MathJax.

You could of course make your tableau in TeX, compile it, take a screenshot, and upload that. But this has a downside (besides being convoluted): it largely defeats the purpose of the editing feature.

On the other hand, there are initiatives like XyJax, which is a limited port of the xypic package to MathJax. So you could try to recruit some adept JavaScript programmer to port your favourite tableau writing package to be suitable for MathJax.

But even then, you'd have to get this ported package approved of by the SE team, which often proves to be a big hurdle for this type of request.

In conclusion, I'm afraid that you'll have to work around this limitation.

At least for expository purposes, the screenshot method is quite reasonable, if you're willing to make the effort.

Since there is no good answer, I'll suggest a bad one:

4) MarkDown if you're okay with it

So following one of the answer above (using my phone), I get the following. 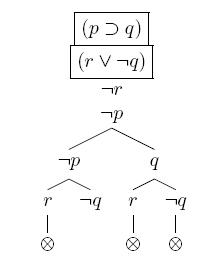 The code is the same.

This site's pretty good if you want to provide the code.

12
Should I edit a question everytime I see an image in it?
6
Tableau as an answer

20
Newbie wondering: Personal messages, leftover incomplete answers, ...
13
Are users here not dear?
89
STOP! Look and Listen.
11
Can the site-design be improved to be more welcoming to new users?
4
How are **bold** and *italics* presented in comments?
0
What is the best way to write a long sentence or paragraph using Roman typeface?
15
Adding MathJax to the title of posts being edited - bad habit?