I just noticed in this thread, Praphulla's hat is in the middle of the post. Refreshing didn't resolve the issue. 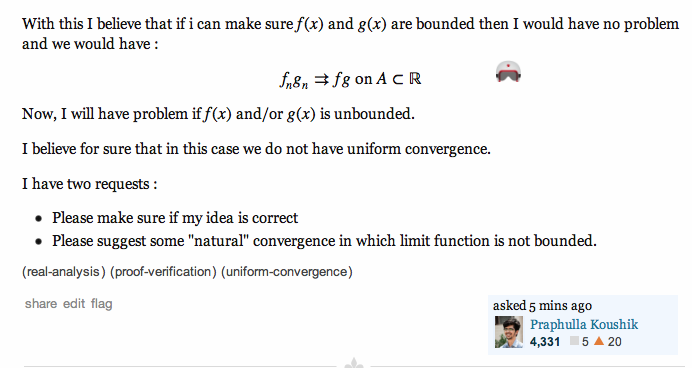 Interesting. Most other hats are positioned on the page relative to user's avatar (position: relative), but this one is given absolute coordinates, with respect to the upper left corner of the page: (position: absolute). Presumably, said coordinates are calculated after the page loads and the hat-adding script can see where the avatar is. Trouble is, the page also has this MathJax thing going on, with several displayed formulas. When they eventually get rendered, the avatar ends up lower than it was when the hat was positioned. Possible fixes:

Not the answer you're looking for? Browse other questions tagged bug winter-bash .

2
Is this really a hat?
23
Did I miss this year's hat discussion?
26
Mathjax stops rendering after clicking "An edit has been made to this post"