I've created a new proposal on Area 51 for a Stack Exchange focusing on the history of mathematics and science.

In both cases, mining the literature alone can be very difficult at times, and an SE would be really beneficial. I also hope that this SE might promote the study of the history of science and math among both students and teachers, since I (and hopefully you, too!) really think it's almost crucial if you want to really understanding either subject.

This SE is different to history.SE firstly because it's more specialized, but more importantly because answering or asking questions about the history of science will usually require knowledge of science (or math) as well as just history. Asking about the origin of $p$-adic numbers is unlikely to get you anywhere on a site full of people who are primarily interested in history and not math.

This SE is different to math.SE or physics.SE because an interest in history (let alone an in depth knowledge of it) isn't necessarily standard among math or physics experts, so a question about any even slightly obscure topic in history is unlikely to get a very good answer unless the right person happens by.

The site is now in private beta!

Private betas are not really private: anyone can join, or simply browse the site by clicking here and then clicking the site name on the login page. (Logging in is optional.) 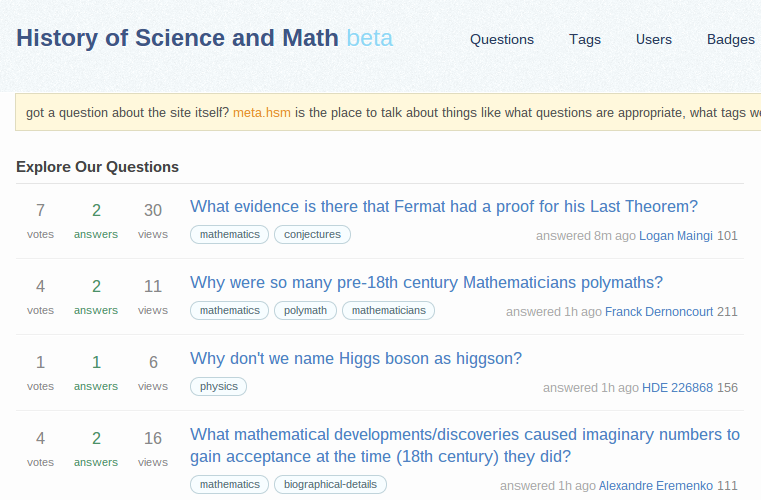 Not the answer you're looking for? Browse other questions tagged discussion area51 .

14
What are appropriate historical questions?
16
History of Math and Science proposal is in commit stage