Does the number of answers influence if someone will answer anew?

I'm not questioning about the length or quality of present answers. I want to know, if a question has one answer or more, does the number discourage someone who has never read the present answers from answering ? Someone simplement just looks at the number of answers, which is > 1?

I know if answers are bad or short, someone might invoke better answers. But not questioning about this. Do more answers discourage people?

I don't know how to research this myself. Thanks to all.

After the first answer, each subsequent answer is less likely than the previous one: 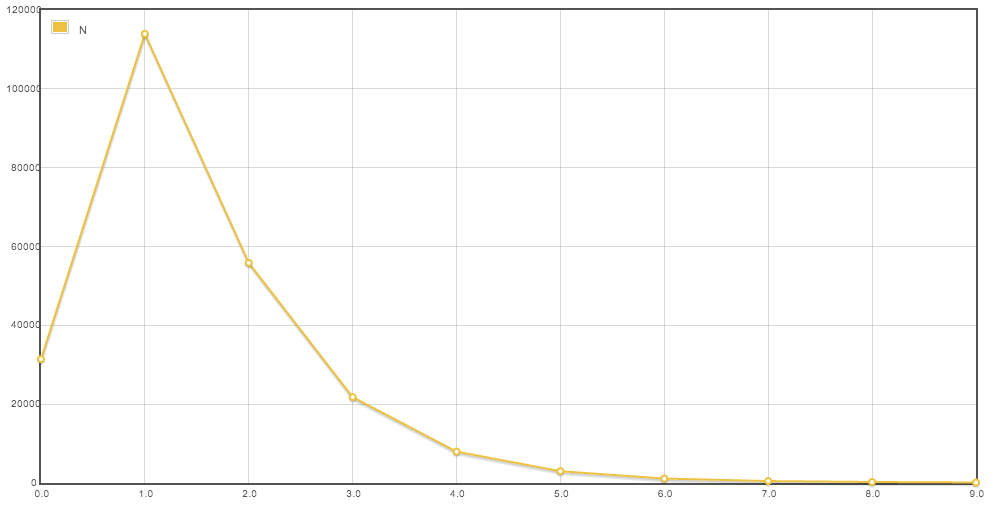 The above graph shows the distribution of open questions by number of answers. Not surprisingly, people have a strong tendency to answer unanswered questions. But once the question has been answered the odds of one more answer decrease somewhat. This looks roughly like a Poisson distribution with a mean of 1.5 (the answer rate on Mathematics):

Outside of the relative lack of questions with zero answers, answers are more or less distributed as we might expect from a Poisson process. If so, the odds of a new answer are independent of the number of existing answers. As a first approximation, I say that getting one answer does not artificially discourage further answers.

Another way to think of it is to consider what we'd like to avoid. It would be annoying if a person with great insight into a questions decided the existing answer was "good enough" and the site were deprived of a better solution. But remember that they have other options such as editing or leaving a comment (which sometimes prompts an edit). So even if you never get another answer posted, that doesn't mean you'll never get a better answer.

We know there is a first answer bias. On Math, it's about 0.6 votes on average. Some of that might come from the bandwagon effect. But it could also be that the initial answer legitimately tends to be better than the rest. This site boasts excellent quality, so it stands to reason that a quick answer that's upvoted by the community sets a high standard. The next answer might very well fill in some details or provide an alternate method of looking at the question. Those are useful things and we hope people offer them as answers too, but not all voters will find them as worthwhile as the initial answer.

In the elder days the OP would often (be expected to) "summarize replies", which was an important and useful act of consolidating posted knowledge.

An update of that idea for multiply answered questions on SE-style forums can be to add some meta- or methodological analysis of what makes those answers work or is the "inner core" of the problem. That is an activity that could hold experts' interest even when the question is routine, since the jaded old hands would then be examining the structure of the entire solution space of the question and not the more familiar (read: boring) activity of finding one of its points.

This is, in my opinion, not done often enough on the site, and would add much value. Personally I find it more interesting to write some methodological answer than to post a first, second or third direct answer, and it is a way of creating novelty and depth around material that can feel pedestrian.

17
Infinite monkeys typing on infinite keyboards, will they ever produce silly answers like on this question?
16
Is this the longest answer on the site?
11
Is the review tool *too* effective at helping us process items?
30
I have ~7 accounts. Is this OK?
3
Why are we proudly displaying the number of questions without upvoted or accepted answers?
12
“Copying” someone else's comment for an answer
27
How to make users follow a better etiquette?
72
Does the reputation system encourage easy answers and low quality questions?
4
Question regarding the standards of the site. Need help. Someone mass downvoting my posts.