I hit the limit of 25 close votes earlier today. Oddly enough, the Close Votes queue did not gray out, and I was allowed to "review" while not being able to vote to close.

This is inconsistent with the behavior of other queues. When a user is out of up/down votes, they are kept out of First Posts and Late Answers; those queues are grayed out on the main review screen. This makes sense: users unable to follow through on their judgement are not useful as reviewers.

Not so with Close Votes. When presented with this task, I could review it by clicking Leave Open (which I did as an experiment), but not by voting to close (which I would do normally). 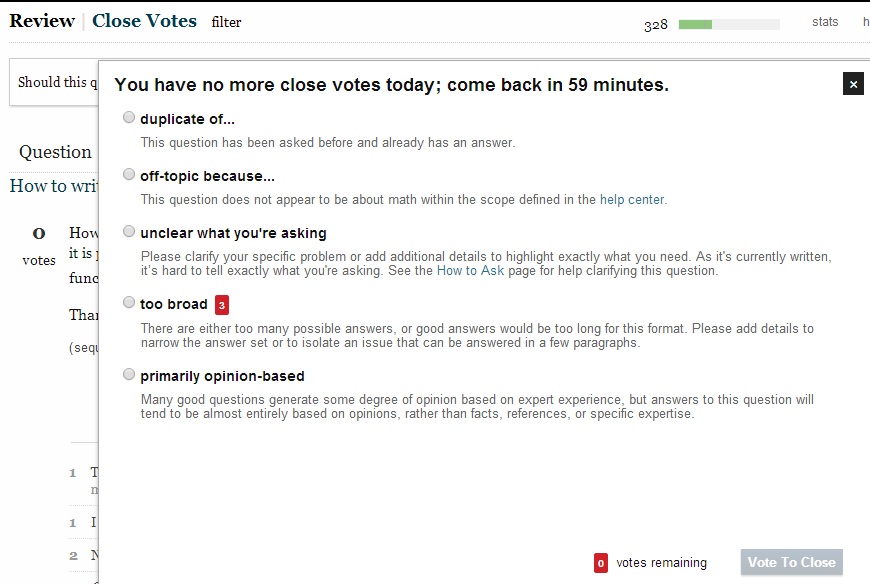 This has now been fixed, as folks repeatedly found it confusing.

Note that in practice, this should rarely be an issue: you have more votes than you have reviews per day. However, at times it's possible to use up so many votes before reviewing that you've not enough left once it comes time to review. If you save a few, you'll still be able to enter the queue and review as long as you don't use up your remaining votes - but if you're encountering a large number of questions that need to be closed, you may find yourself asked to return the next day.

A related bug/hack/abuse is that

one reviewer can repeatedly vote to Leave Closed or Leave Open ( = vote to remove from queue) on the same question.

It looks like this ability exists whether or not there were edits on the question during the time between the first and the last Leave Same vote, so the multi-votes can be on exactly the same version of the same question.

This poses the same inequality problem as Delete voting on a question one has successfully voted to Close: it creates a race condition where users who are over-involved or always online, have a way to cancel the voting abilities of others by acting quickly enough.

Not the answer you're looking for? Browse other questions tagged bug status-completed review closing .

11
Is the review tool *too* effective at helping us process items?
23
Serial down-voting risk from review queues
1
Bug in the “History” tab of “Close votes”?