Is it me or the audit?

Questions about audits have been asked many times before however mine is regarding this specific case. 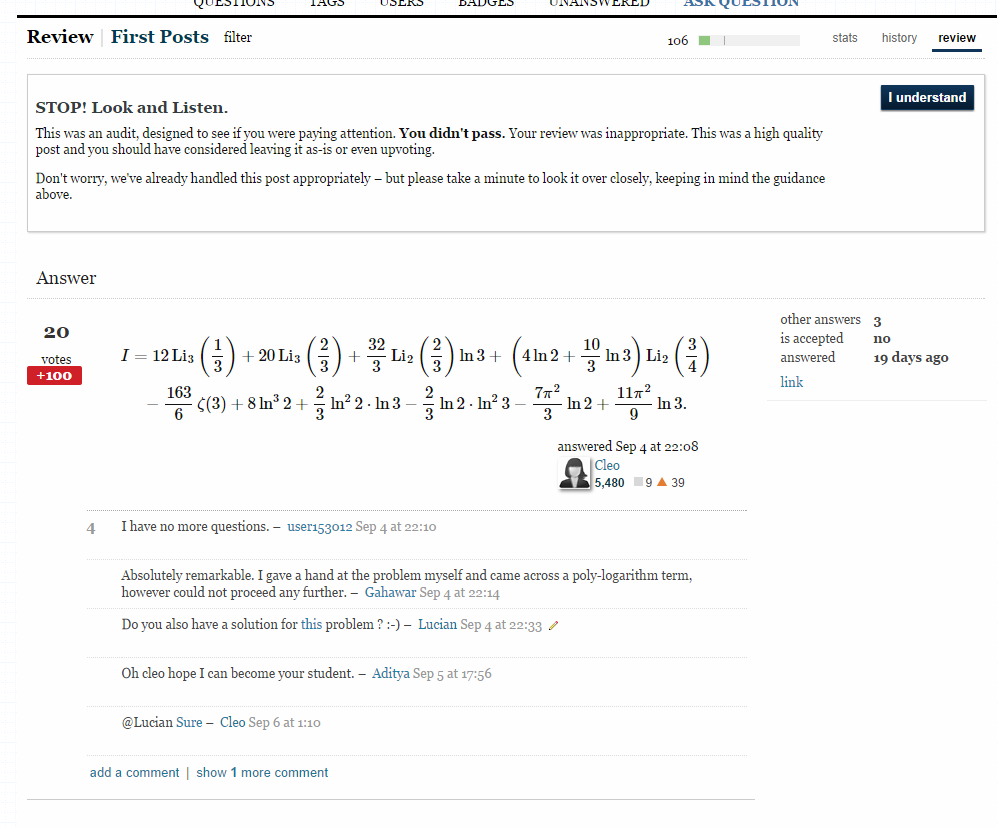 The answer was one blob of LaTeX with no explanation and I thought that it would be better suited as a comment. So I proceeded and ticked "Not an answer" as there was no explanation. But then it turned out it was an Audit.

Now I understand there is an area of MSE where questions and answers do not "follow" the same convention as other areas eg. questions may be brief and and answers may give the result only however for MSE as a whole this does not hold.

Did I do anything wrong?

No, you did not do anything wrong. You reviewed the contents of the post, thought it was not suitable as an answer, and clicked according to what you thought of it. This is the desired behavior of reviewers.

It happens that the post was an answer to a very difficult integral, where giving a closed form with no explanation is still a major contribution. One can test the correctness of answer numerically beyond a reasonable doubt, and knowing the form of the answer helps in finding a way to its eventual proof.

(Historical example: according to John Stillwell, Mathematics and its History, "after hearing that the sum [of $\sum 1/n^2$] is $\pi^2/6$, Johann Bernoulli himself discovered a proof, which turned out to be the same as Euler's".)

As I wrote in Review FAQ

if you are reviewing carefully, an occasional failed audit is of no real consequence and should not discourage you from reviewing.

I add an explanation from higher up:

the primary purpose of audits is education not punishment. It's easy to make mistakes, especially after you've been doing a fairly monotonous task for a good while - sometimes, it's helpful to have a sanity check. I fail audits occasionally myself, and always take it as a sign that I've perhaps gotten in too much of a hurry and am in danger of becoming careless; the audit (and countdown timer that goes with it) is a welcome reminder to look up and take a breath before going any further.

Although I still think that review audits are more harmful than helpful and really need to go away (they continue to be the reason why I don't review at all), I do disagree with your decision here. I have always understood "not an answer" to mean "does not attempt to be an answer", and that a bad, incomplete, or even totally wrong answer is still an answer.

Not the answer you're looking for? Browse other questions tagged discussion review-audit .

19
Do we want to enable the review auditing feature that discourages robo-reviewing?
25
Should review audits be disabled (pending improvements)?
25
Should we have a more centralized approach to book recommendations?
5
Scope of the order-theory tag
19
The duplicate thread
10
Review queue tests in need of revision?