Making edits when rep under 2000

I have noticed that if I make an edit before a 2000+ user, my edit is rejected by the community even though I sent it to que prior to said 2000+ user completing their edit. Why is this? Aren't edits supposed to lock from editing waiting for approval for those under 2k to get approved or denied? 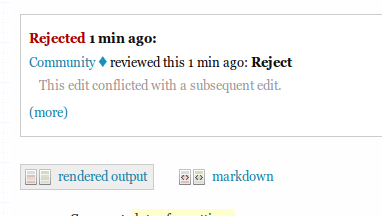 I know my edit was in prior to this user completing their edit since I was commenting on the post when they finished their edit.

An edit can go to the que prior to a 2k+ user, get one approval 10mins ago, so the user couldn't have been editing for that long to start before me.

After your suggested edit is submitted, a 2000 user cannot begin their own edit without reviewing yours: if they click edit (1), instead of the regular editor the system brings up your edit for review. I just experimented with this myself: 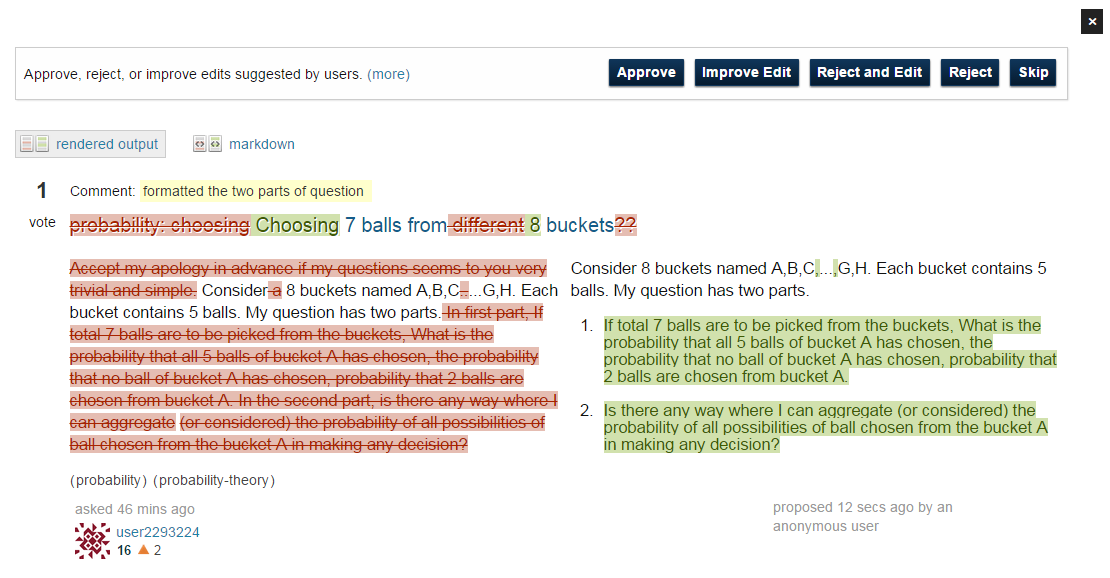 Pressing Skip here returns the user to the question window without any changes. Any of the other four buttons will constitute a review of the suggested edit.

However, if a 2K user begins their edit prior to you finishing it (and finishes it before your suggestion is fully approved), your suggestion will be rejected. The conflict between a suggestion and a real edit is always resolved in favor of the latter. See Can we get a better conflict resolution to edits vs suggested edits.

Timeline of your first example

Timeline of your second example

It seems that the author noticed a problem with their question immediately after posting, and began editing it. Their edit was more than just formatting, so I understand it took a while to type. The author of a post has the privilege to edit it directly, so the edit conflict was resolved in their favor.

Not the answer you're looking for? Browse other questions tagged support suggested-edits .

7
When a low-rep user suggests many edits to old posts?
2
How to tell when suggested edits have been considered?
2
How to deal with users padding their answers with custom signatures?
15
Users making edits by putting displaystyle or other inappropriate scaling in the title
5
Editing to correct formatting. What to do when author edits discarding formatting changes? Why the high rep barrier?
1
Making changes to edits