I just came across this suggested edit of the functional-analysis tag-wiki. Whether this edit actually fixes/improves the grammar or not is debatable (at least in my mind), and hence I chose to reject it. However, I was wondering what the community norm for these suggested edits is. We do not allow trivial edits of questions, and especially edits of questions that have been asked long before. This tag summary was created in 2011, and has since been unchanged. Do we allow trivial edits of tag summaries, if they offer just minor improvements? Or do we uphold the status quo?

Please let me know if my action was wrong, and I should act in a different way for tag edits.

Trivial edits (of any kind) should not be approved. Although tag edits don't "bump" something to the front page, it is still useless noise. It also gives the appearance of badge hunting (whether or not that's the case, it still gives that appearance).

It seems that a particular user has been submitting such needless edits, and I would encourage them to stop.

Current SE philosophy about suggested edits suggests that they need not be rejected out of hand. While once upon a time there was a "too minor" reject reason in the suggested edits review queue, this is no longer the case: 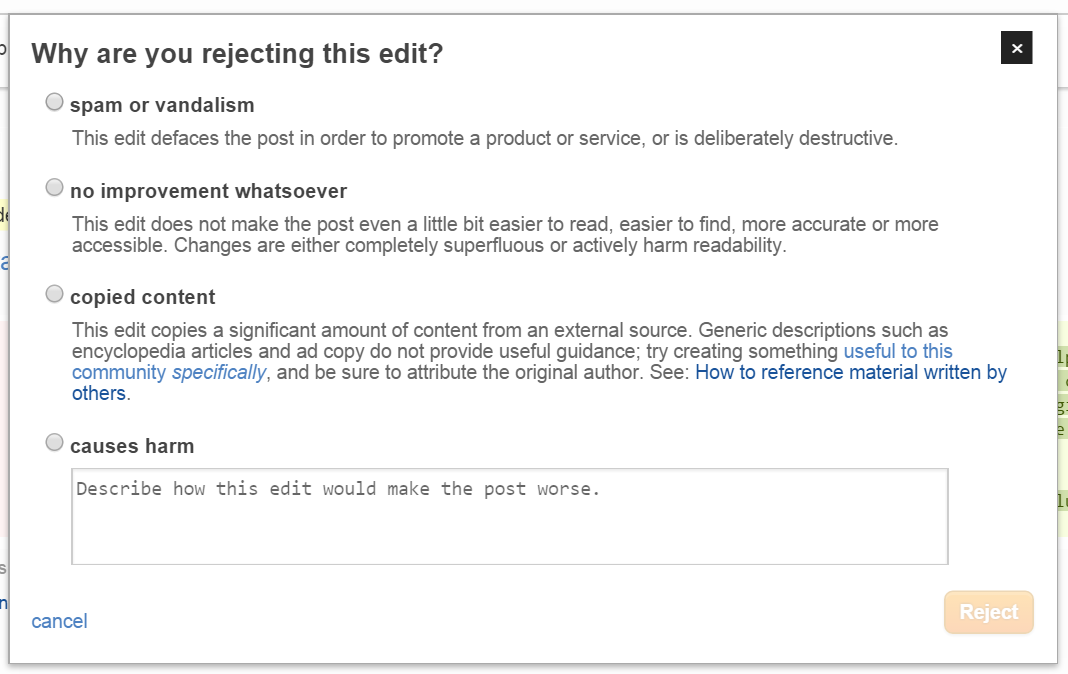 This edit does not make the post even a little bit easier to read, easier to find, more accurate or more accessible. Changes are either completely superfluous or actively harm readability.

For the specific suggested edit at hand, it is questionable, IMHO, whether "no improvement whatsoever" fits.

But reviewing suggested edits should not involve only approving and rejecting. The workflow should actually entail quite a lot of editing on the part of the reviewers. Let's look at the options available in the review queue:

Note that there are two options for the reviewer to make edits:

In addition to deciding if a suggested edit is valid, reviewers should also be actively looking for ways to improve the posts they come across in the queue beyond the suggested edits themselves. For tag-wikis, an often neglected part is information about in which cases the tag itself is appropriate, and possibly also suggestions for other (closely related) tags in cases where it is not.

The colours in the above screenshots don't match math.SE's scheme because they come from puzzling.SE, whose moderator Emrakul was kind enough to supply me with not only the images, but also some reputation for suggesting a tag-wiki/-excerpt edit.

Not the answer you're looking for? Browse other questions tagged discussion review suggested-edits tag-wikis .