Earlier today I flagged a post, and I was torn between a borderline spam flag and a VLQ flag (or NAA maybe). I decided to flag with a free-form text, and say that I'm torn between these options, asking for guidance.

Shortly after the flag was cleared as helpful saying that the answer is "comprehensive" and does not constitute as spam, and it's not VLQ nor NAA. I downvoted and moved on.

Few minutes ago I saw that the post was deleted by a moderator, and by looking around, I noticed the post on the "Reviewed" list somewhere indicated that someone had flagged it shortly before that deletion.

Do the moderators see previous flags on these sort of occasions?

I'm wondering because I wonder if the moderator who deleted the post knows that someone else on the moderator team thought it was not pure junk, and "not worth deleting" (or even flagging!) and in that case, I also wonder if in these sort of cases moderators talk to each other about these sort of things?

Needless to say that I have no complaints about the post being deleted; if anything, I would complain that someone (other than the user posting) thought it would be a good idea to keep it on the site.

Here's an example of what moderator's see when handling flags on a post: 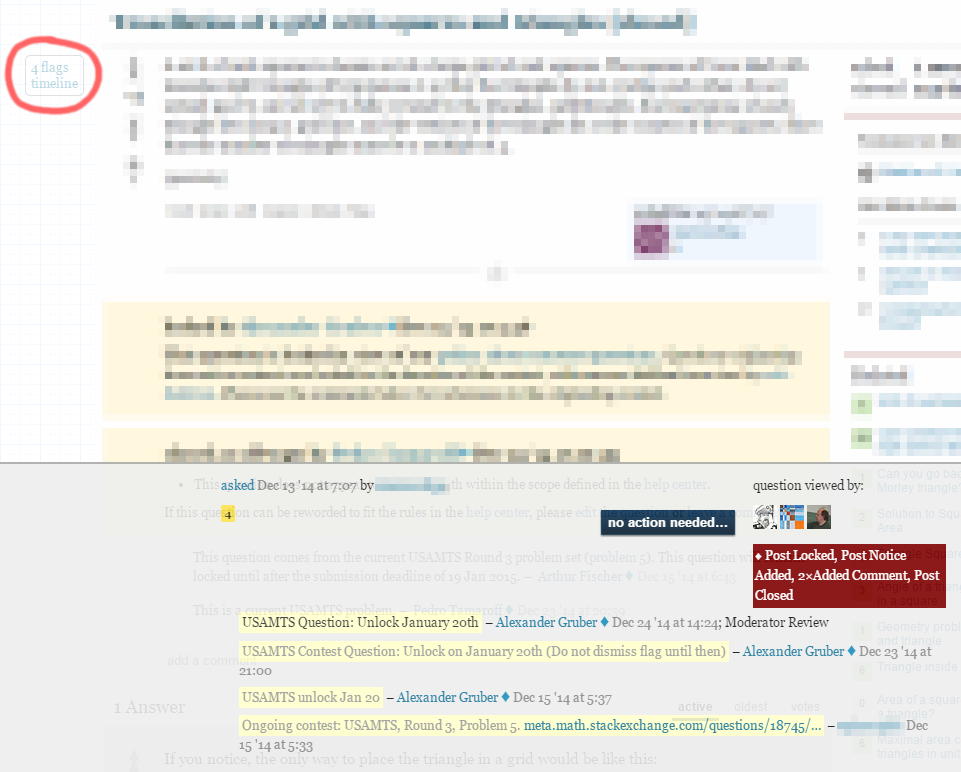 At the bottom we have the "flag bar" which gives information about flags. Here already-handled flags are greyed out, although no information is given about who handled the flag, nor exactly what, if any, actions were taken with respect to any specific flag. It doesn't even mention if these flags were marked as "helpful" or "declined" (or "disputed"). It does indicate what actions moderators have taken on the post in general (in this case the question was locked, a post notice was added, two comments were added, and it was closed), though, again, it doesn't mention who took those actions. On the bright side, we can see which moderators have viewed the post.

The circle on the left contains, in this case, two links. The "# flags" link gives a flag history of the post together with a brief post history. It is here that a moderator can see who acted on which flags, whether the flags were "helpful" or "declined", and what, if any, message was given to the flagger. We also have a link to the moderator timeline of the post, which is quite a bit more comprehensive than the timeline regular users have access to. (Were there any deleted comments, a link would also appear here to show all deleted comments.)

It is also possible to handle flags from the "moderator dashboard", but here one gets easy access to less information: 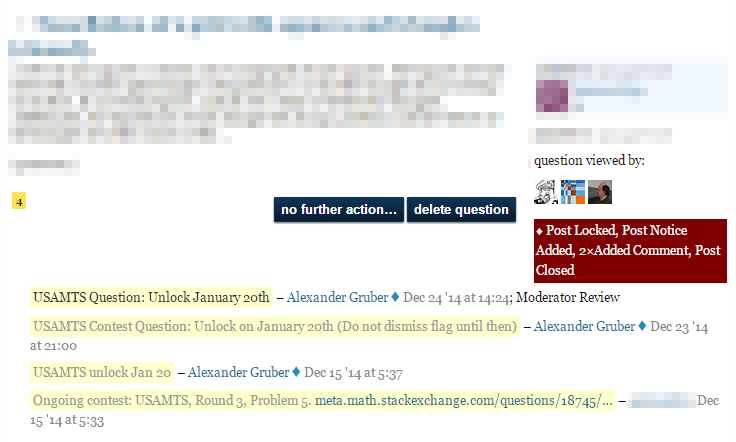 (The default options available to the moderators is dependent on the type of flag.)

Basically, in order to get any more information we have to visit the post itself and follow links from there. (For this reason I personally rarely handle flags from here, and is why this section may seem like an afterthought.)

So, yes, it is possible to see what actions have been taken on previous flags, though it's not as straightforward as one might suspect and can be easily overlooked if one is confident in the action they have decided to take.

Not the answer you're looking for? Browse other questions tagged support flagging moderators .

7
Declined user flags for "Deputy" badgers
5
Invalidation of flags by 10k users
20
Wrongfully declined flag?
13
Recent invalidation of flags
3
Guidance for how and when to flag a question: declined flags
6
Question about using flags
7
What should I do when I see a spam post?
10
What flags can 10K+ or 20K+ users handle and what flags are only visible for moderators?