According to my profile page, I've voted on 1100 questions and voted on 800 answers. If Q is the number of question votes I've given and A is the number of answer votes, then $Q-A=300$. What is the distribution of $Q-A$ across all users? What about looking at just upvotes?

With about 410k questions and 599k answers, the averages are:

Only the votes on non-deleted posts are counted above.

The averages given above mask large differences between individual voters. Back in December 2014, I compiled some statistics for the 17 users who cast at least 10000 votes by that time. The chart distinguishes question votes (blue) from answer votes (green); it includes both up and down votes. 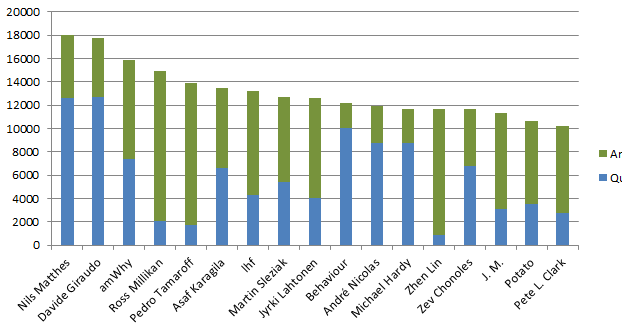 Not the answer you're looking for? Browse other questions tagged discussion voting statistics up-votes .

12
Strange sequence of upvotes
14
Sometimes I don't get why people upvote some answers so much
14
What is the rate at which questions are typically upvoted?
3
Why are we proudly displaying the number of questions without upvoted or accepted answers?
17
Upvoting answers on questions for politeness
9
What is the distribution of the difference between question upvotes and the largest upvoted answer?
15
Low reputation users with a lot of ghost votes
47
About up-votes.
35
Why favorite but not upvote?
11
Why did this answer get an upvote?