I have been using the Stack Exchange app on my iPhone for three months or four. Generally this app is really appreciated, which provides a relatively quicker connection to this site and a freer browsing experience. But here is a very frequent problem that I have been encountering within this app - the MathJax display often looks out of order under certain circumstances. (Although on the computer these problems are usually gone)
I've got two examples here that represent two kinds of Jax display problems within this iOS app:
The first is the "overlap" problem. The screenshot below is the famous MathJax tutorial post. This is not the only case where the overlap occurs (it's just I happened to browse this page and just caught it), in fact there are really many cases. 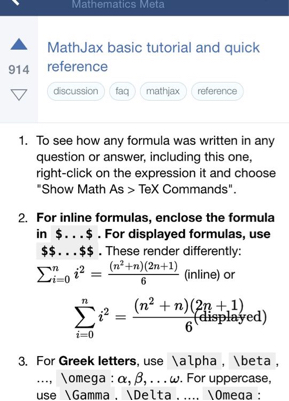 The second is the "overflow" problem, which is much more common to be seen. The screenshot is an answer by @Oliver Oloa. Since it is impossible to scroll horizontally within iOS app, it's my impression that whenever a line is too long for the mobile phone screen, the overflowing part will be missing. 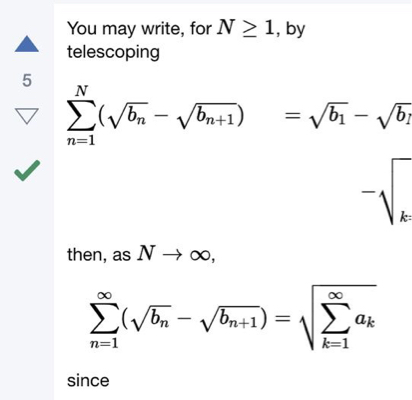 I have to confess that these two display problems do cause some inconvenience sometimes, especially the "overflow" problem. Could anybody help? (Is it ok to ask here?).
I know it's perhaps all because iPhone screen is too small to display a very long line which, however, would look just ok on PC. But I guess there would always be ways to solve such problems. Maybe forcibly break a long line into smaller lines so that the iPhone screen can hold?
Best regards!

EDIT:
For the second problem, now I think maybe it's not necessary nor proper to forcibly break the lines, perhaps all that is needed to do is enable scrolling horizontally within iOS app.
support bug status-completed mathjax ios-app
Share
edited May 13, 2015 at 22:58

[I believe this needs to be transferred to meta.stackexchange.com].

Per my answer on Meta.SE I'm adding scrolling to wide display MathJax and upgrading to 2.5.3. This has not solved the problem of tags overlapping with equations, but as Peter mentioned it's a known issue in MathJax.

The changes will appear in the next build.

Not the answer you're looking for? Browse other questions tagged support bug status-completed mathjax ios-app .

15
Slow processing, different look to math processing, problem with fonts. Is it me, or is it the site?
12
Mathjax 2.1 beta
3
MSE iPhone App: Math display in problem titles
2
Issues with the iOS application
2
What are some options for putting another, smaller copy of this long Latex item?
1
Does the iOS app stop supporting horizontal scrolling?