Why does MathJax not render in comments on the mobile app? [duplicate]

I sometimes read SX stuff from the app on my android. Today, I found myself reading a question from Math.SX. To my surprise, after a while, I noticed a problem in the comments, which this screenshot records: 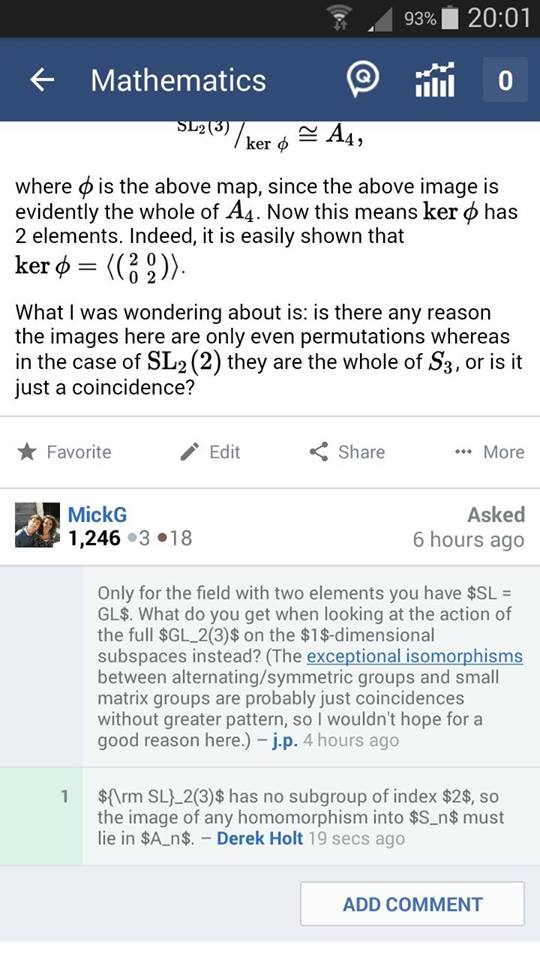 If you are curious about the question, it is this one. Anyway, as you can see (hopefully the image is not too small, but the dollars seem pretty visible to me) MathJax is not rendered in those comments. THis is very bad, because in this case there isn't this much of complications, and besides, I am very accustomed to LaTeX, but imagine something far more complex (integrals with limits, sums, or the likes) with a user whose LaTeX is bad or not exercised: the comments, thus unrendered, become unreadable. So why is MathJax not rendered in comments whereas it is in the question? And why does this only happen in the app, not the site?

Addendum Is there a more "logical" way of reducing the image besides copying the HTML code from this answer, code placed there by Firelord in an edit, every time I post a screenshot and it is terribly huge? To be extra-clear: this is NOT the question. I'm adding this sentence because it has happened to me that I asked a question, then faced a formating problem while posting it and asked about it as an extra, like here, and got faced with answers addressing only the extra. Please don't.

Update: Yes, the question this has been marked a duplicate of (i.e. this one) is strongly related to it. However, as the titles already show, they are not the same. It is interesting to know this is status-by-design rather than a bug, and even more so to know that by tapping on a comment, clicking the vertical ellipse $\vdots$ on the top-right corner and choosing render MathJax one can get the comment with rendered MathJax to appear in the middle of the screen; but that doesn't answer why things are that way. Why should MathJax not render in comments in the app? This was my question.

7
MathJax not displayed in comments
8
Bug in mobile version

7
Math Jax isn't working as it used to
5
The \smallsmile and \smallfrown commands render identically to \smile and \frown
4
The double-bar delimiter does not stretch in MathJax 2.2
7
MathJax not displayed in comments
9
MathJax not rendering in comments and post preview
4
LaTeX/MathJax does not render in some question thumbnail