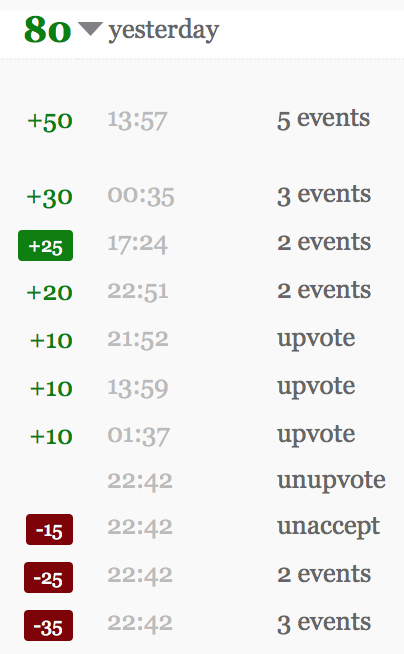 so I checked the three questions where I should have unaccepted answers. Since after a whole day the situation didn't change and the reputation page still shows wrong data, I thought it better to ask here.

Yes, I still have the green tick; when I saw the three “unaccept” marks, I went to see and found the ticks were still there:

Note that this is the complete report for the day and no “voting corrected” or “user removed” entry is shown, so this apparently is not something due to serial or anyway bad voting. If it is, then we have a different bug. In other words: if the “unaccept” is not a voluntary act by the user, I should be notified that this “unaccept” is a correction by the system.

In Normal Human's answer below, the picture shows “voting corrected” entries, which makes his/her case different from mine.

This is an effect of vote invalidation. When votes between two users, or all votes of a particular user, are invalidated, the accept-votes are invalidated too. The answer keeps its "accepted" status, but since there is no longer a valid accept-vote, the 15 rep gain is gone. You can also see that hovering over the affected checkmarks shows "loading when this answer was accepted..." which is somewhat misleading and has been reported as a bug, but is intentional.

As Arthur Fischer noted, you are not the only user affected by this invalidation event. Here's my reputation tab: same day, same time.

So, there was serial voting involved; your reputation history wasn't affected enough to show this.

This does not look like automatic vote invalidation (which would happen around 3:00 UTC). I think it was triggered manually, by an SE Team member who was notified of an irregular long-time voting pattern (possibly involving multiple accounts) and pushed some buttons.

By the way, the effect was somewhat dramatic in the topbar notifications: lots of -10s and +2s (only a few fit on the screenshot): 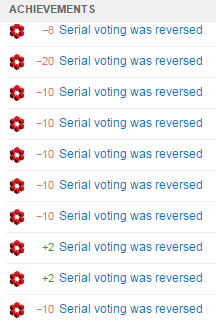 Not the answer you're looking for? Browse other questions tagged bug status-bydesign reputation accepted-answer .