When exactly is the comment "This does not provide an answer to the question..." added by SE software?

This does not provide an answer to the question. To critique or request clarification from an author, leave a comment below their post - you can always comment on your own posts, and once you have sufficient reputation you will be able to comment on any post.

The comment is signed with some use name. So probably from the comment itself it is not clear whether it was added by some (at least partially) automated process.

However, I am not sure exactly in which situations such comments appear. I decided to ask here rather than experiment, since I do not want to flag some post by mistake. And also low quality posts review queue is empty at the moment, so I cannot experiment there.

I think that knowing exactly when this happens might be useful for some discussions which are currently going on.

Is seems that they can be added when reviewing low quality posts, see: What is the mechanism behind auto-generated "This does not provide an answer to the question" comments? However I am not sure when is it added. Is it only added when I choose "Recommend deletion"? If I choose this option, is there some possibility for me to choose what auto-generated comment is displayed and whether it is displayed at all? (The tag-wiki for the tag automatic-comments on meta.SE says that it is optional.)

Do some flags cause addition of such comment? Namely if I flag some post as "not an answer", is such comment added? Do I have option to decide whether it is added, when I use this type of flag?

Are there some other situations when such comment is added by the software?

Just to clarify, I am asking only when such comments is added by the SE software. Of course, nobody prevents a user from typing such comment manually, add them from some comments repository using some bookmarklet or userscript, or simply copy similar comment from here.

1 I have copied the text of the comment from here. (A deleted post, so it is visible for 10k+ users only.) I cannot know for sure whether it was added by software or actually typed in by a user, but the first possibility seems much more likely, since I found the post from Low quality posts review history.

Since in the meantime a post appeared in the low quality review queue, I was able to take a screenshot: 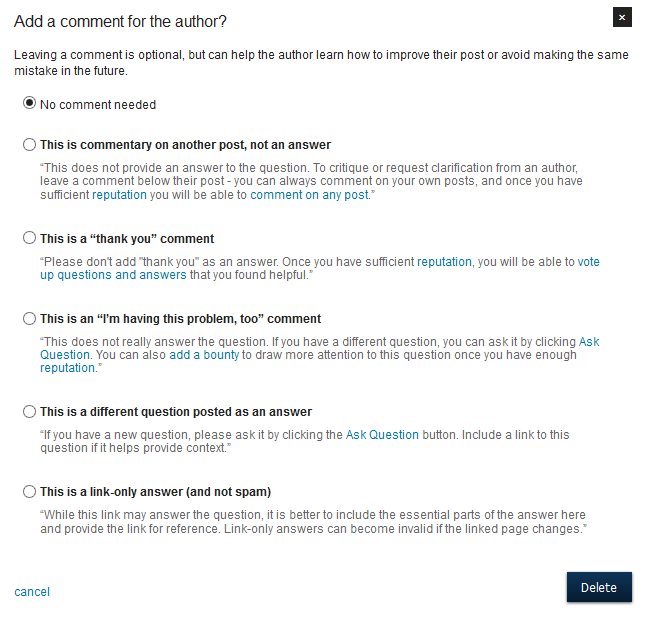 Is it only added when I choose "Recommend deletion"?

Yes. But even then not always.

Yes. After pressing "recommend deletion" there is a pop-up with a list of six options (see below). The first and default is "no comment needed" the rest are some typical scenarios with a standard comment, one of them is the one you quote. If one chooses one of those the comment will be added (except if it is already present, from an other user, I think).

No. The flag just puts the answer in the queue.

Do I have option to decide whether it is added, when I use this type of flag?

No. It is never added.

Here is the text of the pop-up I talk about.

Leaving a comment is optional, but can help the author learn how to improve their post or avoid making the same mistake in the future.

The bullets are selectable items; the default is "no comment needed."

Note the first comment is slightly different as it depends on the points of the answerer; users with the comment-privilege do not get the remark that eventually the will be able to comment, which is reasonable.

4
Notification to commenter when @username is not employed
4
How to insert a post into the "Low Quality" review queue?
4
Should I flag comments, where long MathJax breaks page layout?
26
What is "very low quality"?
1
What to flag if no own work is visible?
8
What clears a Low Quality flag, and what removes a review from the LQ queue?
17
Etiquette for flagging a comment that points out a (corrected) typo?