Is voting on questions getting harsher?

Lately - just in the last few days for me, but I haven't been paying close attention - I've noticed that the scores on questions seem to be substantially lower. Digging in more deeply, questions like this one on a fairly classic but not immediately obvious complex-numbers question or even this one have started out in the hole - the latter question was at -1 when I initially wrote my (admittedly far-from-perfect) answer to it, though the question fortunately seems to have accumulated several upvotes (and lost its downvote) along the way. I'm definitely not suggesting that bad questions should be rewarded, but it seems like there's been a concerted effort from somewhere to try and raise the bar and that some not-great-but-reasonable questions are getting swept up pretty harshly (IMHO) in it.

Note that this is a distinct question from whether the quality level of the questions has declined - I feel like there's been an overall tapering of quality over the last few years but things haven't seemed particularly worse in the last few months than they were before that, whereas voting definitely feels like it's taken a downturn. Is anyone amenable to running the numbers to see if there's an actual phenomenon here, or just a perceptual issue?

Interesting. Moderators have access to certain analytical data not present in the 25K site analytics (25K only). Part of this is up-/down-vote data on questions (and answers). Below is a graph showing the sliding seven-day average of up-/down-votes on questions.

(Update: Checking back on these charts for the same period even just a few days later, there are noticeable differences. This can really only be explained by these charts only counting votes on undeleted posts. So, of course more downvotes would be cast on recent questions, because those questions haven't had a chance to be manually deleted or sucked up by the Roomba yet.)

We're also in (another) period of historic highs in the number of incoming questions. The sliding seven-day average has been about 750 questions per day for most of this month, and we're frequently getting more than 800 questions per day (with big drops on Fridays and Saturdays).

I imagine that these two trends are related, as previous years have also seen a fair increase in both the total number of questions asked, and the number of downvotes on questions at about this time of the year.

In terms of question score, a very simplistic SEDE query gives the following picture of average question score by posting date for this (Gregorian) calendar year. 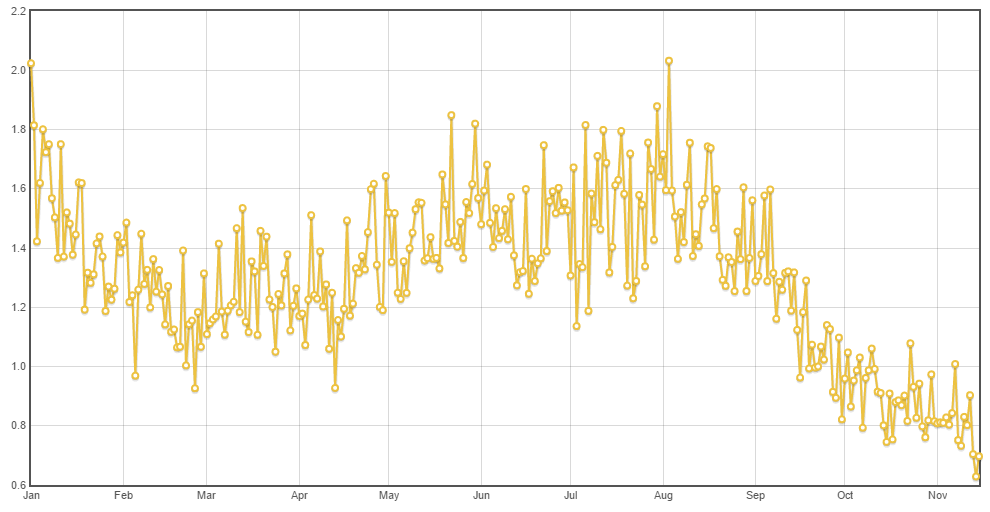 If stuff like that wasn't downvoted back in the days, that that was a problem, and I'm glad to see that it's being fixed.

Exhibit B question is a question you've answered. The "broad hint" you wrote made it clear you didn't think the question deserved a full, elaborate answer. Well, that means it was a bad question, so downvotes are in order -- for the question and its answer.

Not the answer you're looking for? Browse other questions tagged discussion voting statistics .

29
How good is an answer without any explanation? And how far should an explanation go?
50
About up-votes.
34
Have the questions on Math.SE changed in quality?
18
Is Math StackExchange aging?
-9
Unfounded multiple downvotes and close requests
8
How can I find statistics on number of edits on math.SE?
14
Answers which are not quite answers, but still could be useful to stimulate learning.
26
Has the culture of acceptable questions on SE changed over time?

18
Infinite monkeys typing on infinite keyboards, will they ever produce silly answers like on this question?
24
Centralized solutions to textbook problems considered harmful?
0
An adoption system for on-hold questions?
7
The [rational-numbers] and [irrational-numbers] tags
24
Best and worst tags for % answered rate
18
Is Math StackExchange aging?
30
Can we have "2021: a year of EoQS"?
43
New stack exchange site: for interactive theorem provers and automatic theorem provers