The MathJax/LaTeX rendering seems to be broken for question titles in the "Related" section. Example from Show that 1 + $\lambda$ is an eigenvalue of $I + A$: 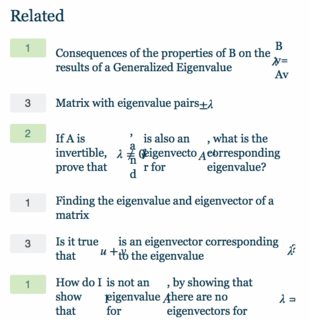 (Observed with Safari and Chrome on OS X, Firefox on Windows.)

The issue appears to be that the page's CSS causes the links in the sidebar to be display: flex, and that changes how the children are treated. The content is no longer a paragraph-like structure that wraps normally. Instead, it is a series of boxes that align left to right. That means that the text before a math item is one box, the math is another, and the text that follows is a third. By default, these must appear all on one line, so the initial text is wrapped, as is the final text, and the math is smashed in between. Since these three boxes don't fit in the allowed horizontal space, the three boxes overlap, as in your diagram.

I'm not sure when the change to the CSS occurred, nor what the purpose of it is. It seems that it might simply be to allow the question title to be centered relative to the score on to its left.

I suspect that a fix would be to put the contents of the <a> element into a <span> so that there is only one child of the flex container (whose content will wrap normally).

Not the answer you're looking for? Browse other questions tagged bug mathjax design related-questions .

5
Firefox 4 and MathJax \not
7
No MathJax rendering in preview windows.
10
LaTeX does not render on a user page after navigating using page numbers or changing the sort criterion
0
\not \vert not rendering on Firefox 13.0.1
1
MathJax tries to render "side-by-side markdown" when Fast Preview is enabled
22
MathJax doesn't display in the new profile page
4
Odd inline mode MathJax rendering problem in the MathJax basic tutorial