Should the complexity of an answer be a reason for downvotes (if it is correct)? What should I do?

In light of an argument here over an answer being downvoted (apparently multiple times) because it was 'complicated' to whoever downvoted, which I found to be the wrong reason to downvote, if there were reason to downvote. More lightly, it may be a good reason not to upvote, but not necessarily to downvote.

So, my first question: "Is the complexity of an answer a good reason to downvote?"

My second question: "What should I do if I think a seemingly good answer is too complicated for me?"

My third question: "What should I do if others think my answer is too complicated, especially when I believe it is a good answer?"

For the most part, my first question has an answer already, and the decision that appears to go for most is that complicated answers are acceptable, good for the community (but not necessarily the OP, which shouldn't hinder you from posting your answer), and good for future viewers of said answer/question.

Also, I realize that generalization of a problem may lead to greater complexity. Generally, I think a mix between a generalized answer and focused answer make a good bunch for a question.

I'm only going to touch on the first question.

Yes. Remember that voting is an individual decision. While the community at large may have no problem with there being more complicated answers to even simple questions, individual users are free to use their votes to indicate the usefulness of an answer to them.

You read that correctly.

The usefulness of an answer.

Check out the tooltip for the downvote button on answers: 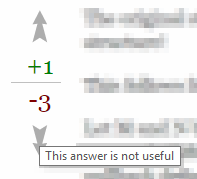 While often used on incorrect answers, even a 100% correct answer is fair game for downvotes if the voter does not feel it is useful to them. Being too complicated could certainly make an answer "not useful" to an individual voter. As could being too terse. Too long winded. And myriad other possibilities.

Not the answer you're looking for? Browse other questions tagged discussion answers down-votes .

18
Can an answer be confusing?

8
When to down vote an answer?
2
Simplifying a question
12
How much research is considered as sufficient prior research before asking a question?
20
Should answer votes be cast based on their accesibility to the asker?
6
Do we need a FAQ question for “Guess what I am thinking” type of questions?
13
Possible improvements of the “How to answer” page
25
Was I right to answer this question this thoroughly?