Unfair up-voting of high reputation, not having a special answer

I have this situation:

There was an easy question posted (why $19 \mid 5^{2n+1}+3^{n+2} \cdot 2^{n-1}$ for every natural $n$), and I knew the answer [which is quite obvious]. I posted my answer, and I saw that it was submitted. after 14 minutes, someone posted another answer, almost the same solution. but only because of his/her reputation, the answer got 27 up-votes, and I got 3. Although I answered earlier. Why would this happen? 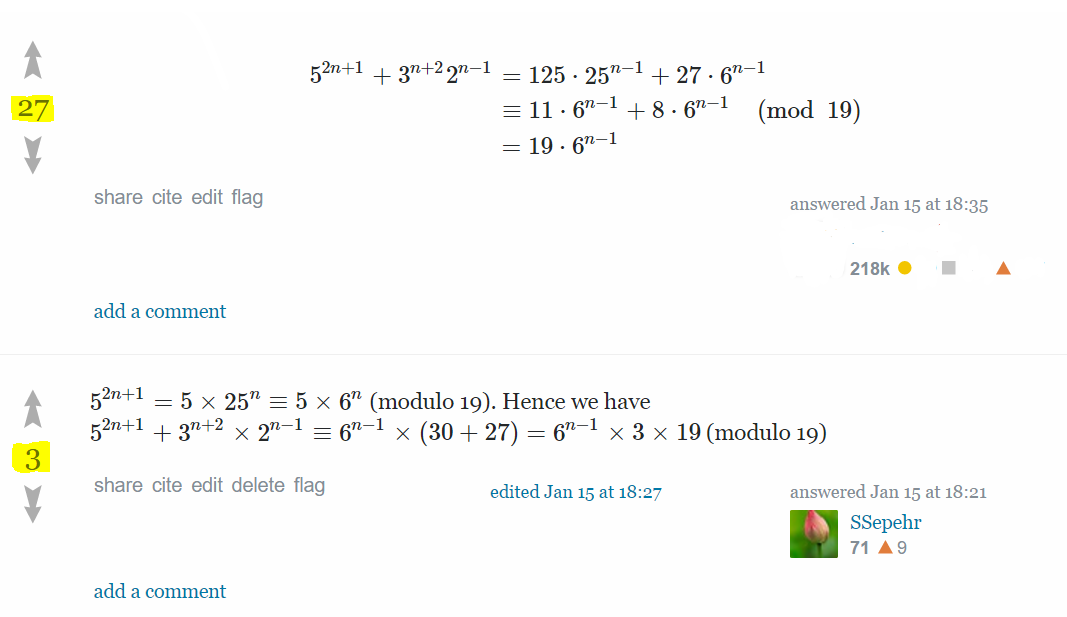 First of all, I used to be often frustrated by this phenomenon myself. I would post answers similar to (well, better than, IMHO) those of other users with much higher reputation, only to find my answers receive half of the upvotes, and virtually none of the acceptances of these others. There was a time during which I hustled for upvotes, only to find that I hated the hustle. For quite a while now I only occasionally answer questions when I find one I feel is interesting and to which I think I have something to add. I'm not looking for upvotes or green check-marks, but really making posting itself the goal to providing answers. Granted, it's a bit easier to do this when you don't have any more privileges to earn.

On Stack Exchange a user's reputation is meant to be a rough measure of how much the community "trusts" that user. Most reputation is gained through the posting of clear and useful questions, as well as clear, helpful (and correct) answers. At a certain point (and I don't known when this happens), a user will have their posts trusted (and upvoted) because their previous posts have been trusted, and this will in turn lead to a further increased trust of their future posts: it becomes a positive feedback loop. Part of this is also that particular users become known as experts in certain areas. If you're wading through multiple answers to a single question, it is easier to focus on those by users you are already pretty sure will have posted a good answer. (I'd be curious to see what would happen if robjohn were to finally post an answer in the axiom-of-choice tag.)

In connection to the last point above, I tend to think that voting is fairly depressed on math.se. I think many users are miserly with their upvotes, and only bestow them on certain favoured users. I should stress that I feel this is only a guess, and I have no real data to back any of this up.

Is any of this fair? Surely not! At the same time I'm not certain what can be done about this. We certainly cannot mandate that users upvote "similar" answers to ones they have upvoted (how would the system judge this?). While there are nudges, such as the Sportsmanship and Electorate badges, to encourage users to pass votes around more, not everyone cares about them. It would be curious to see what would happen if all posts were anonymised on the site. Experiments of this sort have been suggested before, but declined.

As you suggest, one reason why robjohn's answer got more upvotes than yours may be that he has a lot more rep, and is a familiar face to many people on math.SE. Both of these facts may cause some voters to trust his answers more, without necessarily taking the time to check them in detail, than they would trust a similar answer from an unfamiliar low-rep user.

Another reason why his answer got more upvotes than yours is that, at least to my eye, it's a lot better typeset and more readable. I can look at his answer, understand the form of the argument he's making, and verify that all the steps are correct in just a few seconds. It's nothing but one simple (and nicely laid out) chain of basic algebraic manipulations and modular equivalences, leading from the given expression to zero (modulo 19).

Your answer, meanwhile, is a dense and compact block of inline math, with two separate chains of equivalences. I've been looking at it for over a minute now, while writing this answer, and (if it weren't for the fact that a lot of other math.SE users have surely vetted it a lot more thoroughly by now) I still wouldn't be able to tell for sure whether it's correct or not. In your second chain of equivalences, especially, each step involves a bunch of non-trivial algebraic manipulation that really would benefit from being written out. Correct or not, posted early or not, I can easily see how many readers may have taken a look at your answer, seen a terse answer with a bunch of messy formulas that they can't immediately parse, and decided to ignore it since there are other, more readable and interesting answers too.

Finally, as others have noted, most readers will tend to sort answers by score, and pay most attention to the top-scored answers. Some readers may also interpret a high answer score as an indication of community trust (just as people interpret rep the same way), and thus be more inclined to upvote already high-scoring answers. For better or worse, these effects tend to create a positive feedback loop that amplifies scoring differences: the more votes an answer already has, the more votes it's likely to get.

In particular, as quid noted in the comments above, in this particular case robjohn's answer may have acquired some extra upvotes from readers who didn't like the (IMO excessively long-winded) accepted answer, and therefore chose to upvote the "leading competitor" instead. Not all of these readers necessarily took the extra time to also go over all the other answers to see if they'd deserve upvotes too — they just saw an answer they liked sorted underneath an answer they didn't like so much, and decided to upvote it.

I suspect the combination of all these effects is what led to robjohn's answer acquiring so many more upvotes than yours: the few initial voters saw a clear and well-written answer by a familiar and trusted user, and decided to upvote it, while ignoring the terse and kind of hard-to-read competing answer from a low-rep user they didn't recognize. And once robjohn's answer got enough upvotes to raise it up above yours in the default sorting order, the "snowball effect" also started working for him.

Of course, by now, the "meta effect" has also caused a lot more people to take a closer look at your answer and upvote it, since it is, after all, a correct answer to the question. Thus, your answer is now at score 16 (+13 from before you posted this meta question), while robjohn's is only at 28 (+1 from before). The other (also, presumably, equally correct) lower-voted answers still languish at 2 to 3 votes, though — because, honestly, even though all of them are valid and correct, they still don't add much to the other, more popular answers.

Not the answer you're looking for? Browse other questions tagged discussion voting .

24
Does your decision to upvote/downvote depend on the current score?
6
Is UpVote / DownVote related to the answerer's reputation?

7
When to vote an answer down
43
Suspicious behavior between two MSE users
17
mysterious immediate upvotes not based on content
25
Why do obvious duplicate questions on MSE get upvoted, answered, and their answers upvoted?
40
Questions that require a short (i.e. comment length) answer
18
Easy questions: answers or clues?
25
Is it a good thing to erase wrong answer?