squeezing for further information once an answer is given

I gave a correct answer at is it ever possible for a sequence of real-valued smooth, non-diffeomorphic functions in $\mathbb{R}$ to jump across a repulsive fixed-point? a few minutes ago. The OP then tried to change the conditions in comments; I objected.

I don't think we are required to answer the next case the OP thinks of, just because we answered the first. And I think it is rude of them to demand.

P. S. It will not surprise anyone that I have a similar problem with a postdoc half a world away; I have been considering whether to answer yesterday's email. I feel ill-used. 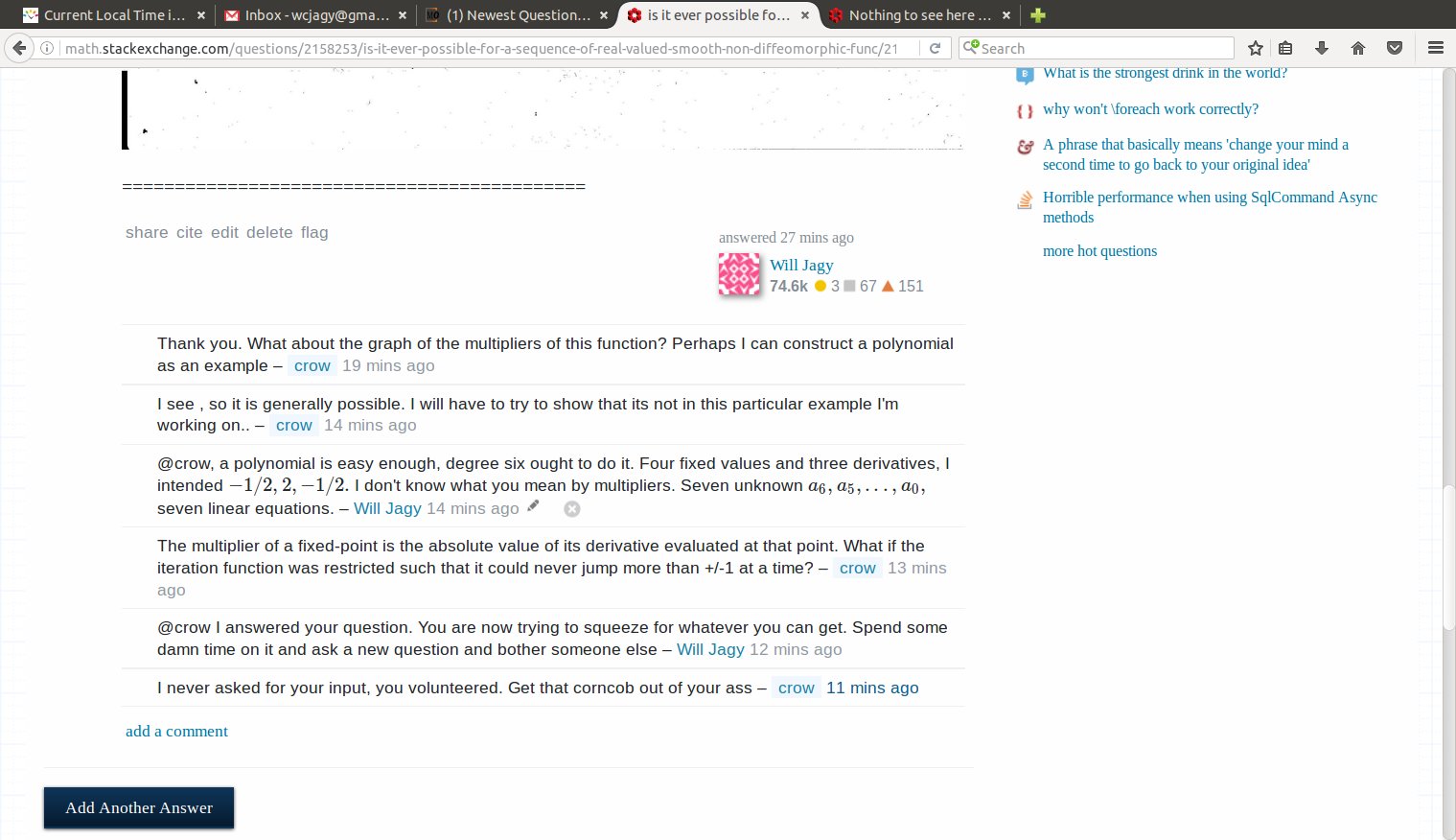 No you are not required to follow up in comments.

At the same time I feel it is not unexpected and rather normal that an asker tries to engage somebody that answered in case something is open.

I feel it is strange to get upset about this, doubly so given the sketchy nature of your answer. If you do not want to further engage, say so clearly and neutrally (possibly even preemptively) or also just ignore. Your comment with "damn" seems out-of-line to me.

As is the asker's reply, of course. But, as far as I can see it was you that misbehaved first, and asker just reacted very poorly.

Buy, I guess none of you ever taught public high school or junior college. My week wasn't complete without someone threatening to go to the principal/head of department and threatening to have me fired.

And now I'm tutoring online and that is a story of its own -- people demand you do their homework now, immediately, and give them the correct answers so they can fill in their online homework. For as little as five bucks. The particular website I use does not encourage this but others do.

Back to the high school days, if anyone ever showed interest and asked a question that was unusually positive.Except yes when they wanted their homework done for them.

I would suggest practicing some neutral ways to say a definitive NO.

"Sorry, I don't have any more time, but you can work it out by yourself." "Just follow the model I used and work on it. You need the practice." "Sorry, have other calls, have to go now." "Try it now and talk to me later if you can't get it." "Give it a try on your own before bringing it in for help."

The young student who is trying hard to work ahead independently will not be hurt by this, and the lazy ones will go away without starting a flame war.

Perhaps there is an expectation that once an individual has reached the level of mathematics presented in that particular post, that there should be a corresponding level of maturity with respect to self-directed learning, not to mention an appropriate degree of deference to those who provide assistance.

Simply put, you might expect such behavior from a high school student, but not from someone studying graduate-level mathematics. It is difficult for me to believe that a student could manage to get that far and utterly fail to appreciate when they are receiving helpful feedback.

That said, the question being asked here is largely rhetorical: anyone with sufficient reputation on this site is well aware that there is never any obligation to answer or to comment. We all give our time freely and it is at our sole discretion that we choose to contribute. Personally, I feel I have only one real obligation on this site, and that is to do my best to not provide incorrect information. Civility is necessary as a matter of course, here as well as in our daily lives, but if we fail in our self-restraint from time to time, it is only part of being human. The community has methods to deal with that. But again, there is no obligation to post. There have been many occasions when I get follow-up questions to my answers, and I never respond, not because of anything the OP said or did, but simply because I have moved on or I'm too busy with other things.

The price of advice freely given is that you have to be content with what you get, even if it is nothing at all.

Quid’s answer is good, but perhaps there is more to say.

Could it be that you are by nature helpful, but find that repeatedly dragging you in deeper than you want to go? That you are quick to offer a little help, and that people mistake this to mean they can go on piling up the questions, while you feel this is an imposition or that they should show more independence? This seems a reasonable attitude, but one that may lead to unnecessary disappointment when you subsequently withdraw. If it is indeed so, it might help to look for a way of either preventing that disappointment signalling early on that your investment in the question will be limited or assuaging it by a friendly formulation when you have had enough.

All the same, there should be no need to dance on eggshells if you can keep the tone civilised; it is striking how suddenly the ill-feeling in the case in question escalated. No reaction on either side would have been better than the last two posts.

When this occurs on Stack Overflow, where I am more active than on Math.SE, I politely tell the OP to post a new question.

You were never obligated to even answer the question, let alone answer followup questions. If you find that you don't want to answer more questions, just leave it to someone else to do it.

Now, keep in mind that the only reason that you should have answered her question is if you enjoy answering questions. Your behavior was inexcusable. You need to be mindful of your effect your words have on the student you are helping. If a professor had done something like this to me when I asked a question, I would have been sad for a long time, unnecessarily, trying to think of any possibility that I misinterpreted the reply the professor gave.

I emphatically hope that we don't add to the 10,000,000 rules that we already have here that people are not allowed to ask followup questions. Soon people won't be able to do anything without running into some sort of red tape. Of course one should think for a while before asking followup questions. But should the student fail to do this, you should not bring everything that is wrong with university teaching into mathstackexchange.

Let me point out the elephant in the room:

Comments requesting clarification/expansion can be answered by any passerby.

And also, such comments can be posted by any passerby.

It's perfectly possible to come across an ancient answer on Stack Overflow which was missing one little detail or variant application, and to comment asking for that. Here's an example.

You aren't obligated to respond, of course.

But you are obligated to Be Nice.

If you don't want to answer the comment, don't. No one is forcing you to. Communicating is part of life—what other pay is there for contributing to Stack Exchange?—but you're free to totally ignore comments on your answers if you want to.

It IS possible to respond nicely without doing the work of answering. For example, you might have said:

@crow, that's a completely different question. Please review the site guidelines, and ask it as such.

If you really wanted to be a bit snarky, you could have blandly added that they should do more of their own research:

...if your research prior to asking doesn't lead you to find your own answer, which it probably will.

"squeezing for further information once an answer is given"

What in the world?

What a snotty attitude! If you don't want to answer or engage further with someone who posts a qustion on the internet, then don't. You don't have to be so snotty about it. Let someone else answer the question more fully, and refrain from downvoting and backstabbing just to make yourself look good. I don't like the point-gaming, the bullying and domination by people with a large number of reputation points, or the "flair" concept. I find this site extremely hostile to newcomers. It's outrageous. I find angry colonels and generals from the Army to be friendlier and easier to deal with than these people with 10K+ rep dominating the math SE discussion.

I used to post in the quant section under another pseudonym. I gained some rep there, and then I became concerned and quietly withdrew from that site. I feel that I had some valid concerns about identity theft and how the answers that I posted would be used. All the same it was a much friendlier atmosphere than the math section.

Not the answer you're looking for? Browse other questions tagged discussion answers etiquette asking-questions .

14
Retagging after an answer is given
17
What is the etiquette for reposting one's own answer?
2
Editing policy given new information
2
How to answer a question where a simple answer was given in comments?
2
Copying the answer with all code at once
11
Is it okay to give an answer with only "Yes" or "No" with no further details supporting the conclusion?