Statistically, how does question length relate to community response?

Therefore, I was wondering: What is the optimal length in characters for a question? I would like to evaluate this statistically, using the Site Analytics (Data.SE) by Stack Exchange.

To evaluate the community response, I suggest using the following metric:

From experience, I think there would be a global maximum around $3000$ characters.

I suggest that we let the Number of characters (with spacing) be on the horizontal axis and the Percentage of upvotes to be on the vertical axis on the bar chart.

Since I lack experience in programming and I have not seen any query which does this, I would appreciate it if you could show us the statistics and conclude with an optimal length.

TL;DR: the longer, the better.

Based on the current data, longer questions tend to get a higher ratio of upvotes than shorter questions. There is not enough data to determine an 'optimal' question length.

I constructed a SEDE query which lets you play a bit with the interval length, and the maximum considered length. Feel free to fork it to play around yourself. 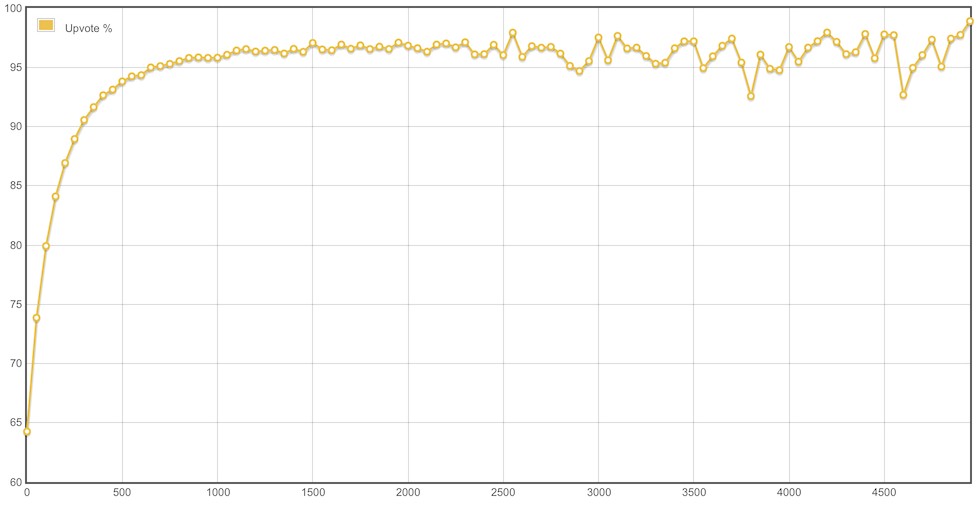 (note that the vertical axis does not start at zero, because of how SEDE works and reasons)

We see that shorter questions definitely score worse, but after 2500 characters the trend seems to halt, or at least it's hard to see the trend because of the 'noise' caused by the fact that there aren't that many questions in that range.

For reference, here is the complete SEDE query:

Not the answer you're looking for? Browse other questions tagged discussion asking-questions statistics .