Should this answer (such style of answers) be deleted?

I've just come across an answer § to a question on Ramanujan summation, which seems to me to be simply a long suada of sentences - even although the verbal content is mathematics terminology. There is also no formatting whatsoever and for me a horror to read - and thus I think it is not helpful for the asker and also not helpful for the general MSE-reader. (It has also been downvoted two times). That answer is also older than 2 years and no attempt to improve that answer and make it more readable/understandable has been undertaken.

I've looked using google for some significant terms to make sure it is not just a copy&paste (and possibly automatic) from some other blog - but google didn't indicate such.

Next I was tempted to delete that answer, but hesitated, then thought to flag it for moderation - but the given categories do not really match (at least not "at the surface"). A moderator-intervention seemed to be an overkill, for me in that moment however (as moderators are human and their engagement is precious, should not be wasted for nothing).

[added comment] The problem, why I began hesitating, was that I could not easily recognize whether the text was possibly not only blabla - just unformatted, but then the answerer could have been asked to do that - but which, of course, I liked to assume. I didn't like to read more intensely into it to confirm this or that assumption about the quality of text: and I think this gives my question a flair of also asking for similar other situations in more generality. [/end added]

Thus this question: How would you deal with such style of answers?

§ The answer which I've linked to has now been deleted, so the link is automatically redirected to the question instead (which I didn't criticize) and the incriminated answer might no more be visible to readers with insufficient reputation. Sorry for that inconvenience!

For the request of low-rep-user: here a screenshot of the deleted answer: 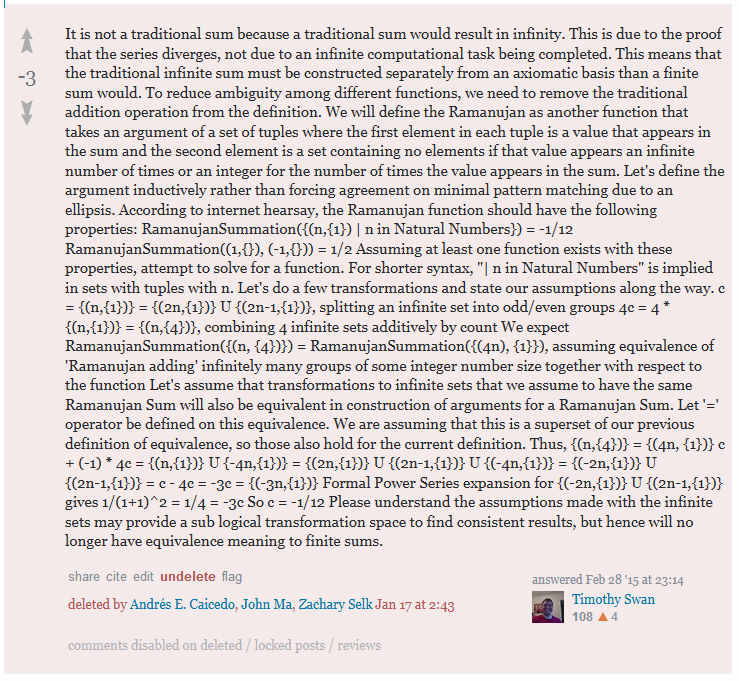 It was terrible and I cast the final delete vote to delete it. Thanks for bringing it to my attention.

Not the answer you're looking for? Browse other questions tagged discussion answers deletion deleted-answers .

11
What's the motivation for keeping the deleted answers?
3
Answers which don't answer a question
1
Is it possible/desirable for answers to be preserved when a highly downvoted question is deleted?
13
Should I have 'accepted' another answer?
3
How long should a non-answer with picture be allowed as an answer
12
Accepting one answer if several answers form a partition of a full answer
22
Should we vote to delete wrong answers?
12
A case for deleting wrong answers