An oddity in the sample question from the tour

I was recently looking at the MSE tour, and noticed the following sample question 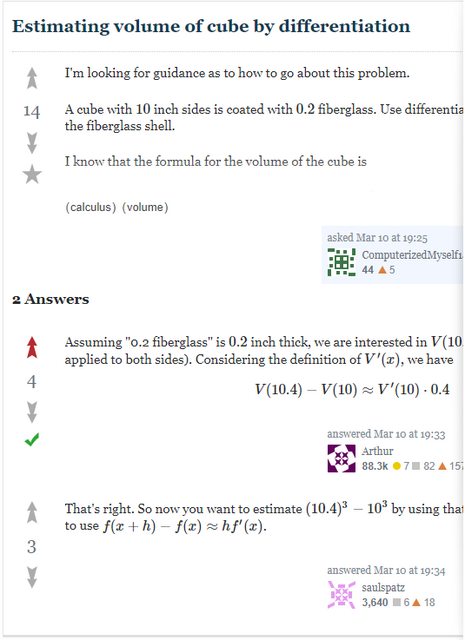 This surprised be, because this is a rather highly voted question that looks like it would have been promptly downclosed.

Searching on the title, I found that it is this question. However:

The tour question needs to fulfill a number of requirements:

I may have forgotten something; please edit or comment if something is wrong.

When a question turns into an example question for the tour, the scores shown are not real. They are always the same numbers on all sites for the purpose of the tour. Also the accepted answer need not be really accepted.

In your example the true accepted answer does not meet the formatting criteria. Instead, two other answers were chosen.

I know this as a moderator on another site. I agree that the example question could be chosen to be something else. There is a great number of possible choices on this site.

Judging by this older meta question, the example used to be something else. Perhaps the rules changed (disallowing MathJax in the title?) and that question was no longer eligible, and a new one was chosen automatically. Or perhaps the question was changed but the new one subsequently became ineligible. The fact that the question in question is the first hit on the list of eligible example questions ordered by ID (SEDE query) suggests that the current choice was made by a machine, not a person. I don't know the full history, but it doesn't matter; what matters is choosing something better than the current one.

Suggestion: Could the local mods pick some question that looks reasonable? We could then have a meta discussion to vote for the most suitable question for the tour? [The question has been changed now.]

12
Choice of the question in the tour

2
When may one post responses that aren't direct answers?
32
Revisiting the tour of the site
12
Choice of the question in the tour
25
The titling of "Proving [...] no matter your initial choices"
48
Some lessons to learn from the 2017 elections
12
How to best format the question mark that immediately follows an equation in a question sentence?
3
Is my question about three-body orbits and conservation laws on-topic here and is this a good place to ask it?
19
How likely is it that a question with 2021 is from a current contest?