So the election for a new moderator are at the last phase and after reading what the candidates have to say I voted, and so I got Constituent.

From the moment I got that badge the site does not show me reputation change at the top: 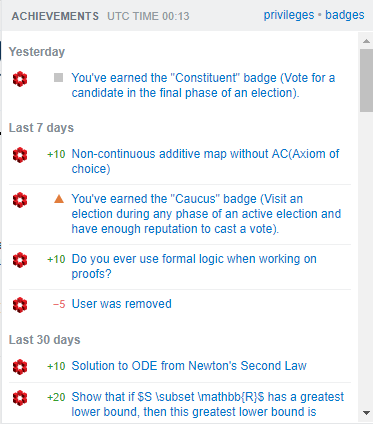 It is the first time I see this, so maybe there is connection between the two but I really have no idea.

Copying this answer from Nick Craver♦ on SO:

Our aggregation queue got jammed up with a bad item here (and we'd rather stall that discard data since it's terribly expensive to analyze and fill gaps after the fact). The bad entry has been handled (data wider than the column in 1 path) and we're now draining. Since we were at 2.25 million items it'll take 10-20 minutes or so to drain out.

Once that happens, everything should be back in place.

I believe the site is programmed to suppress reputation change notifications if the total change is negative. For example, I sometimes see a $+8$ notification when there was a downvote, followed by an upvote, but the initial $-2$ does not generate a notification. For your case, however, it looks like the total change was positive, so maybe the conditions for notification are more complicated than I thought.

Not the answer you're looking for? Browse other questions tagged bug status-completed reputation .

2
Daily reputation counter. Possible bug.
3
Reputation Change without Notification
10
Did some reviews fall through the cracks?
6
Wrong reputation change
1
Progressive deduction in rep for downvoting
0
Why do I have a mysterious reputation change on my profile?