How much did "advice for first-time askers" help?

Since October 2015 a "How to ask?" page is shown before a user asks their first question on this site, and they need to confirm that they read it; see here: Show “how to ask” advice before a new user asks a question. (The post announcing that this was implemented is from October 15.)

Do we have some statistics which can help to evaluate whether this change has made some impact? (This question is somewhat similar to: Registration to ask a question – has it made a difference?)

Basically, I am asking two questions in one:

Where can we get those statistics? There is a page with site analytics, however, I am not sure whether this is of much help here. (I do not see anything about closures and deletion there. It is possible that moderators have access to more detailed stats in the site analytics.) We could also use some data from Data Explorer (SEDE). (Some data will be necessarily skewed, since SEDE contain only limited information about deleted posts in the PostsWithDeleted table. However, I have been told by more experienced users that CMs have the option to run SEDE queries also on the data-set, including the deleted posts - so if we are able to come up with something useful, we might ask them for help.)

Here is a CW answer where we could collect various SEDE queries - they could potentially serve as a source of data to get some insights into behavior of the first-time askers before and after introducing this feature. (We need to get some data first, before we can analyse them.)

Some queries related to first questions:

1The data here is grouped per day - of course, it is possible to use other periods instead (for example by month).
2The query uses Posts table, which does not contain data about the deleted posts. Using the same query on the PostsWithDeleted table would not give stats for all posts, since the information about owner is not shown there. So if we want the data to include the stats for deleted questions, we have to ask a CM who has access to an internal SEDE instance with more data. (Probably this should be done after we gather all queries we are interested in.)
3 A bit of discussion related to these queries can be seen in the Data Explorer chatroom, see this conversation: Statistics about the first-time askers. (I will be grateful for any suggestions how to improve the queries both here in the comments or in the linked chatroom.)

To check this using the premises/query already mentioned in the previous answer, I first checked for the percentage of questions that were closed vs the total of undeleted questions (Intentionally excluding deleted ones to remove the deleted & closed noise). This is what we get when analyzing the first question of each user: 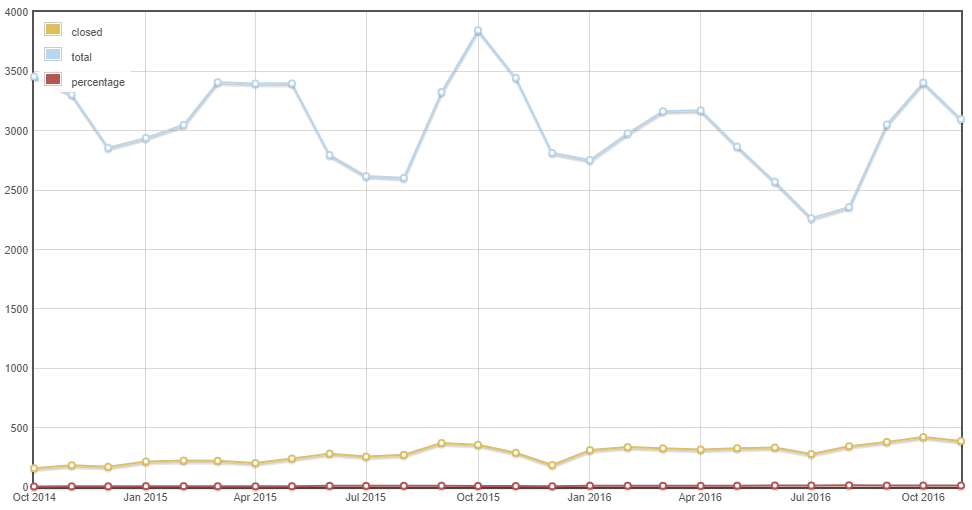 So we see an overall increase in closed questions - a higher minimum and maximum and an increase in average and median. 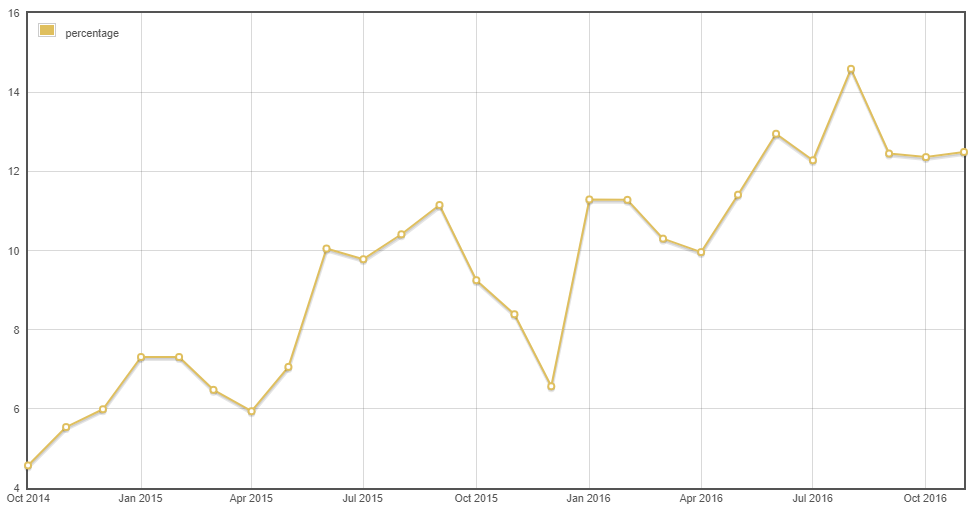 There is a quite different picture for deleted ones, though. This is what we get when we look at deleted questions for the first question of each user: 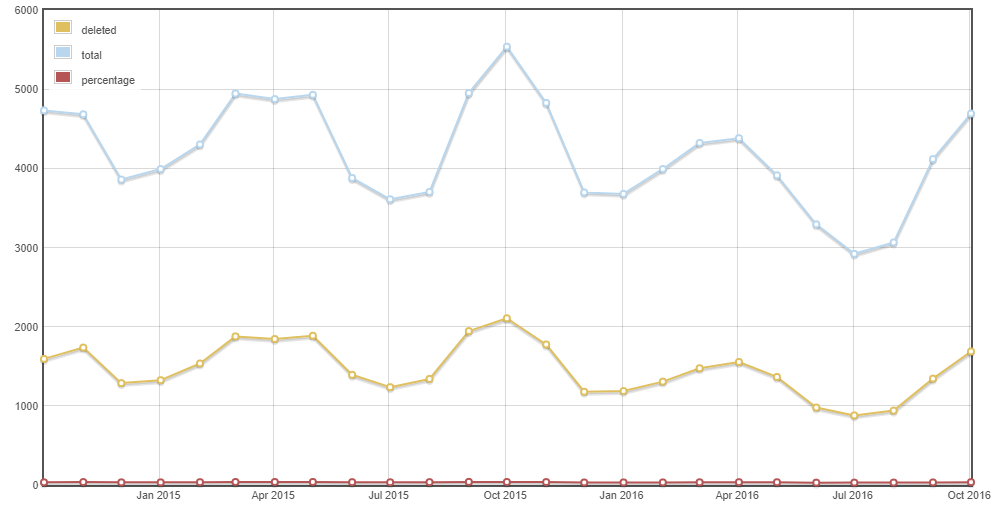 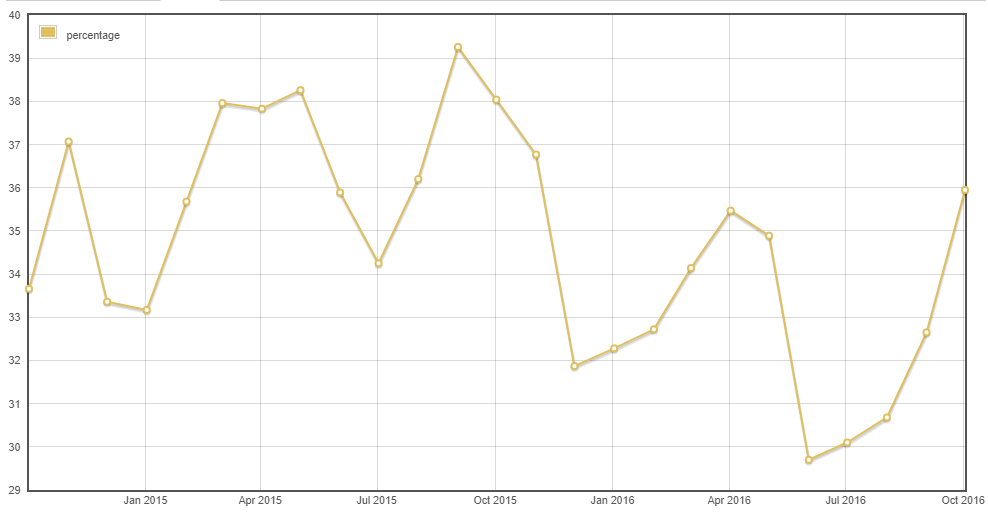 Another thing worth considering is if the tool served as a deterrent for people asking questions, here's the percentage of new users that asked a question on the month they created the account: 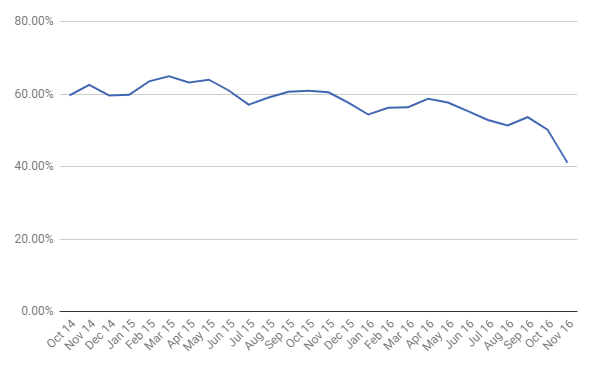 However, from the line in the graph, there seems to be a general decline over time and no significant spike when the tool was implemented - so that's a dead end.

I do not think the date is enough to say with clear certainty that the tool worked or didn't - there are contradictory indications here. One possibility is that it did help, and thus we saw a decline in the number of deleted questions. Though it didn't help that much, because a lot of the questions that would be deleted are still not good enough and thus get closed. It is hard to say that though without looking at the specific close reasons for each question.

One more point of noise is that it seems that October is particularly a busy month on Math, notice the spike in 2014 (not as significant), 2015, 2016 and 2017. And then a rapid fall-off in the following months. 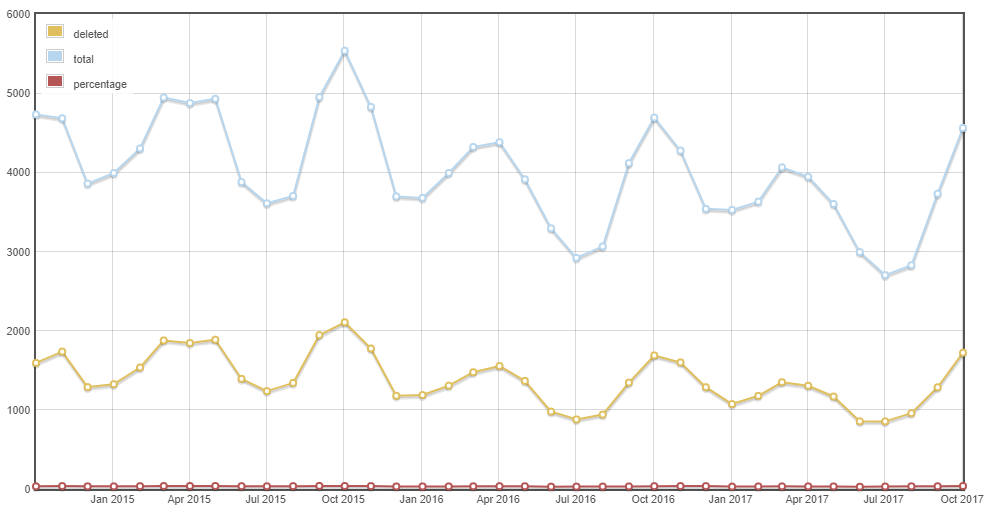 My next suggestion would be looking at Flag Types and see if there's a noticeable change if you folks really want to dig deep into it.

It seems there isn't strong causation of the tool being implemented and an improvement in the quality of questions. There's definitely a correlation that there are less deleted ones after the tool, but causation cannot be proven.

Not the answer you're looking for? Browse other questions tagged discussion asking-questions statistics new-users .

39
Show "how to ask" advice before a new user asks a question
28
Registration to ask a question – has it made a difference?

33
Best time to ask a question
29
Consider giving better titles to the questions you answered... especially right after you answer them
9
How to search for links to a particular external site?
13
How many posts get deleted, and what are they?
39
Show "how to ask" advice before a new user asks a question
8
How can I find statistics on number of edits on math.SE?
46
Statistically, how does question length relate to community response?
16
How did this Answer make it into a Review Audit?
28
Registration to ask a question – has it made a difference?
20
Change the link to search in modal window for the first-time askers