A possible bug regarding MathJax, previews, and the arctangent/tangent functions?

For context, I was making a tweak to GReyes' answer on this question, just cleaning up some formatting with the trigonometric functions. Specifically, I was turning arctan to \arctan and tan to \tan in the MathJax code.

Below is the code in the post and the preview that resulted (blue boxes highlighting the relevant bits):

On playing around, I noticed this does not happen if I instead put \cos or \arccos, or \sec, \csc, or \cot. Only \tan and \arctan would render as sine and arcsine.

What's more intriguing - and confusing! - is that this glitch seems localized only to this question. Playing around on other answers (obviously not saving my edits), I can't reproduce the effects of the glitch. But, another answer to that same question has the tangent/arctangent functions rendering as intended - though on opening it up to edit it, the same glitch arises without me so much as changing a letter!) 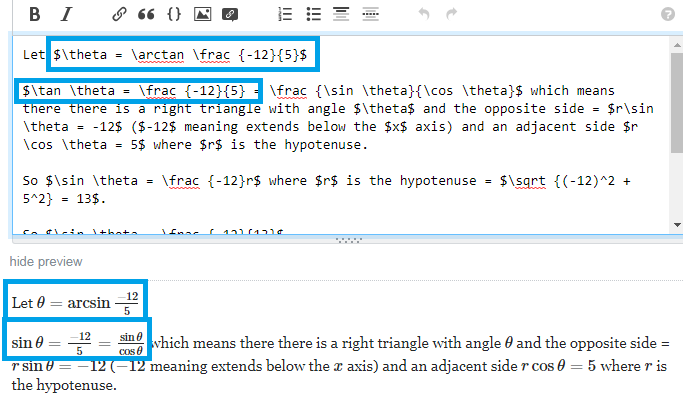 Yet other questions that involve tangent/arctangent functions don't seem to be affected: this one and this one for example.

Does anyone have any idea what might be causing this glitch? I feel like it might just be something on my end, but I honestly don't know.

I admit that I don't know MathJax/LaTeX particularly well - I'm terrible at programming and coding in general, and only know what I do of these from experience and seeing other posts - so maybe there's something dumb I'm overlooking. In which case if this is just a waste of time, sorry.

A linked question contained some malicious code in the title. I've removed it. 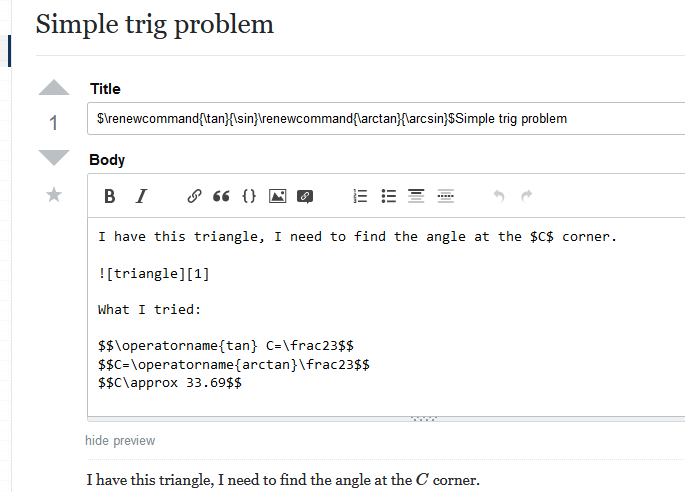 One of the links from Greyes' question is: Simple trig problem- whose URL is actually
math.stackexchange.com/questions/885521/renewcommand-tan-sin-renewcommand-arctan-arcsinsimple-trig-problem
which looks suspicious but my HTML skills are limited so this might be a red herring.

Not the answer you're looking for? Browse other questions tagged bug mathjax titles newcommand .

58
The scope of \newcommand is the entire page
49
Guidelines for good use of MathJax in question titles
15
Should titles be included in begingroup..endgroup (similarly as posts and comments)?
7
MathJax rendering in preview but not in actual post?

9
Can't see the preview at the bottom of a long post
12
MathJax makes preview flicker
6
MathJax preview does not work when editing from review (or when editing a deleted question)
15
Should titles be included in begingroup..endgroup (similarly as posts and comments)?
2
Does MathJax really not recognize cosec?
8
Equations not shown, as if there is a problem with MathJax