Since this is already more than six months this has been reported inside the Mathematics new site theme is live topic, and yet still not fixed, I've decided to put this one separately.

This happens at least in Chrome 68.0.3440.106, also in IE 11.0.9600.19100. If you go to review queues, review question that was flagged as a duplicate, click to Close, then in a list of possible duplicate questions, there are unusually many [Math Processing Error] occurrences, before selecting and after. It seems that number of those increases with number of potential duplicates existing in selection (try to enter some popular expression into search field, for example $a+b+c$ and scroll down...). It seems quite reproducible, not a single occurrence. 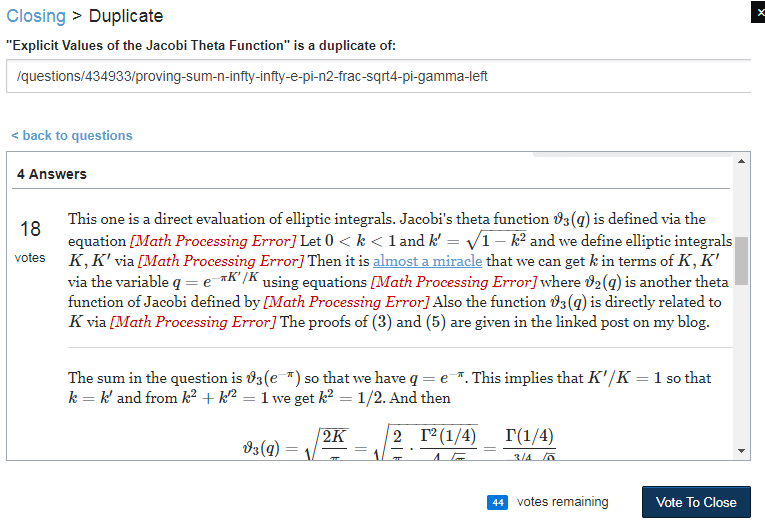 I tried to somehow investigate it and it happens when processInput in mathjax.js catches exception and does return this.processError(f, a, "Input"). The exception callstack seems to lead always to an issue that at some point, PHTMLspanElement() in TeX-AMS_HTML-full.js returned null object which was then accessed (but it happens randomly, timing?). Also this happens only in review queues, it does not happen in questions/comments which have much more math to be rendered, it seems to suggest that something on that review queue is not yet prepared and the math is already trying to be rendered there...

Some related questions (although I think it is worth bringing this up with more details):

Can someone maybe fix this?

30
Switch to MathJax version 3?
10
"Math Processing Errors" in the Close as Duplicate Preview
6
LaTeX a jumbled mess when flagging as a duplicated