I suggest a selectable “reason” for a down/up-vote, and an option for further comment

It was suggested that requiring a category for a down-vote would create an asymmetry between up- and down-votes, so I am amending my suggestion to include up-votes along with down-votes.

This may be a partial duplicate, but the two ideas seem to belong together, so I am repeating the "comment" suggestion, (but adding to it the suggestion that an anonymous comment feature be added for down-votes.)

When I invest considerable time and effort in formulating and composing a question which I post to math.se, and have it down-voted, that is discouraging. It reduces my motivation to contribute, and rarely communicates anything helpful. I often suspect some kind of bigotry, bias or other petty motive is behind the down-vote, rather than an effort to improve quality of content.

I will suggest that down-votes be categorized. In other words, down-voting would require the selection of a reason (poorly formulated|off-topic|insufficient effort|is open-ended|don't like user|that's homework you should do on your own). I also recommend including the suggestion that the down-voter leave a comment (possibly anonymously) explaining the reason.

I understand that anonymity of down-voting is a way of avoiding "down-vote wars", but it has its drawbacks as well.

I believe the suggested features would also encourage participants to be more thoughtful in their voting practices. That is, it would remind them of what a vote is intended to communicate. 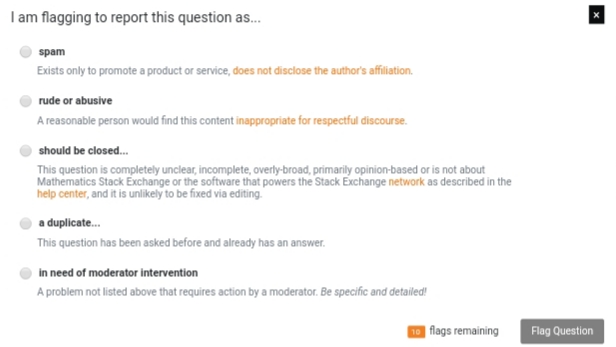 Something similar to this, pops up if you select should be closed: 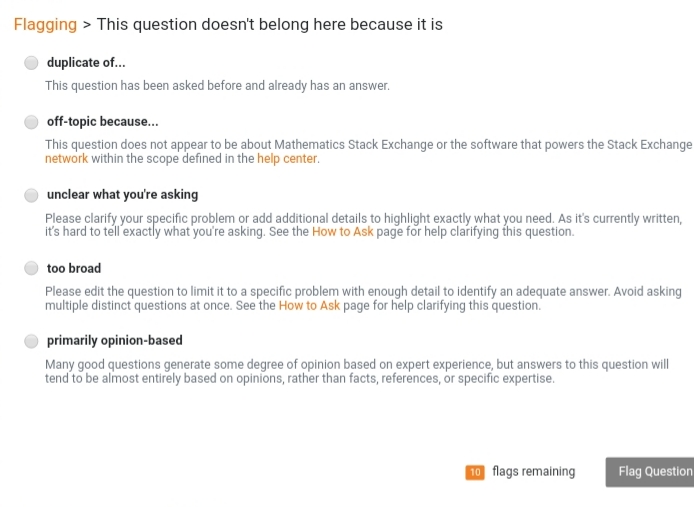 Do you see how, a lot of these are similar to the suggestions you make for the downvotes ? You'll Also find that you can get 5 downvotes on an answer, before it cancels the reputation points from a single upvote. On a question the downvotes mean more. You'll also find a downvote asks you to leave a comment, it's not generally enforced. People who are spammy or crackpots, don't generally give up unless challenged. They are subject to the Dunning Kruger effect, as are some of your own postings.

Past postings by you, state that you being off-topic is on the community. Not entirely true, your being off-topic could come down to the level of postings, in a given math community. More advanced, adequately researched and on topic questions, are likely to warrant moving them to MathOverflow. Off-topic rants, could have been simply deleted, instead of downvoted.

Not the answer you're looking for? Browse other questions tagged feature-request down-votes .

-10
Can you please give new users some time to breathe?

31
exercising the vote not to close
23
“Suspicious voting behavior” and the vote anomaly detection script
15
Up Vote Down Vote
59
Is it appropriate to downvote answers for the sake of deleting a question?
20
Down vote for new user
0
An auto-comment on first questions that motivates sharing doubts and thoughts