When does Goldbach get away from non research levels? [closed] 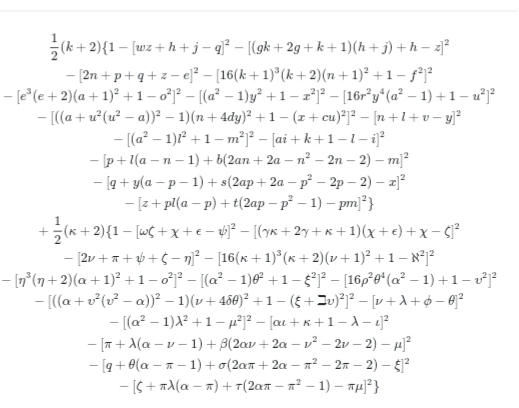 This polynomial being every natural number greater than 3 is consistent with Goldbach's conjecture, because if both halves are positive, this is half a sum of two primes.I'm mostly trying to show

Would this monstrosity of an equivalent to Goldbach's conjecture, be offtopic on math.SE?

Mostly tempted to use this to annoy people who think what they have is new without doing research. Especially on Goldbach questions. But I'm trying to be on topic for the main site.

This was originally going to be a comment, but I realized it's more of an answer.

Perhaps the first question you might want to ask should be: Is this equivalent to Goldbach's conjecture? If you explain why you think it is, that should be sufficient context. As a side note, if I'm reading the link correctly, I'm pretty sure it's not equivalent. Note that the poly at the link doesn't necessarily produce all primes, and only its positive values are prime. Its negative values are not necessarily prime. (Also, it has (lots of) negative values, which would also be a problem, no?)

Lastly, the question you've asked about here would be on topic, given adequate context, but I'm not really sure that would make it either a good question or cause you to get an answer that you'd like. What exactly would you be looking for in a solution to your question? A proof of the Goldbach conjecture? Forgive me if I think that seems unlikely to occur.

Also to be clear, I don't think you've provided adequate context here. Your question as written here is:

This is equivalent to the Goldbach conjecture. Can someone show me how to prove it?

The moral of the story here is that when asking a question, you should generally explain two things

I see neither of those at present.

14
The Criteria to Close a Question
11
Question from a non-mathematician off-topic?
30
Does “mathematics at all levels” include the level of those who harbor typical confusions held by most laypersons?
65
Matching level of answer to level of question
25
Isn't rewarding question askers taking away from downvotes?