Question regarding the standards of the site. Need help. Someone mass downvoting my posts.

(I'm trying to avoid this as hard as I could in past, but someone finally make me do it.)

(When I openly comment about a downvote on a good question that I'm doing for a while with good reasoning I think someone took it personally.)

When I'm about to join this site , I've a illusion that this site is about advanced mathematics or mathematics at research level at least basic research ( relative to Overflow) .

But I understood the game here and going to mention in my viewpoint :

(2) People who downvote a relatively good question should tell what's wrong with the question, it can save a lot of time if it's a trivial question or mistake. Or if it's not it's a high possibility of getting ignored by person who really know something.

(3) Someone is mass downvoting my uploads So I ask all moderators for help to resolve this issue.( 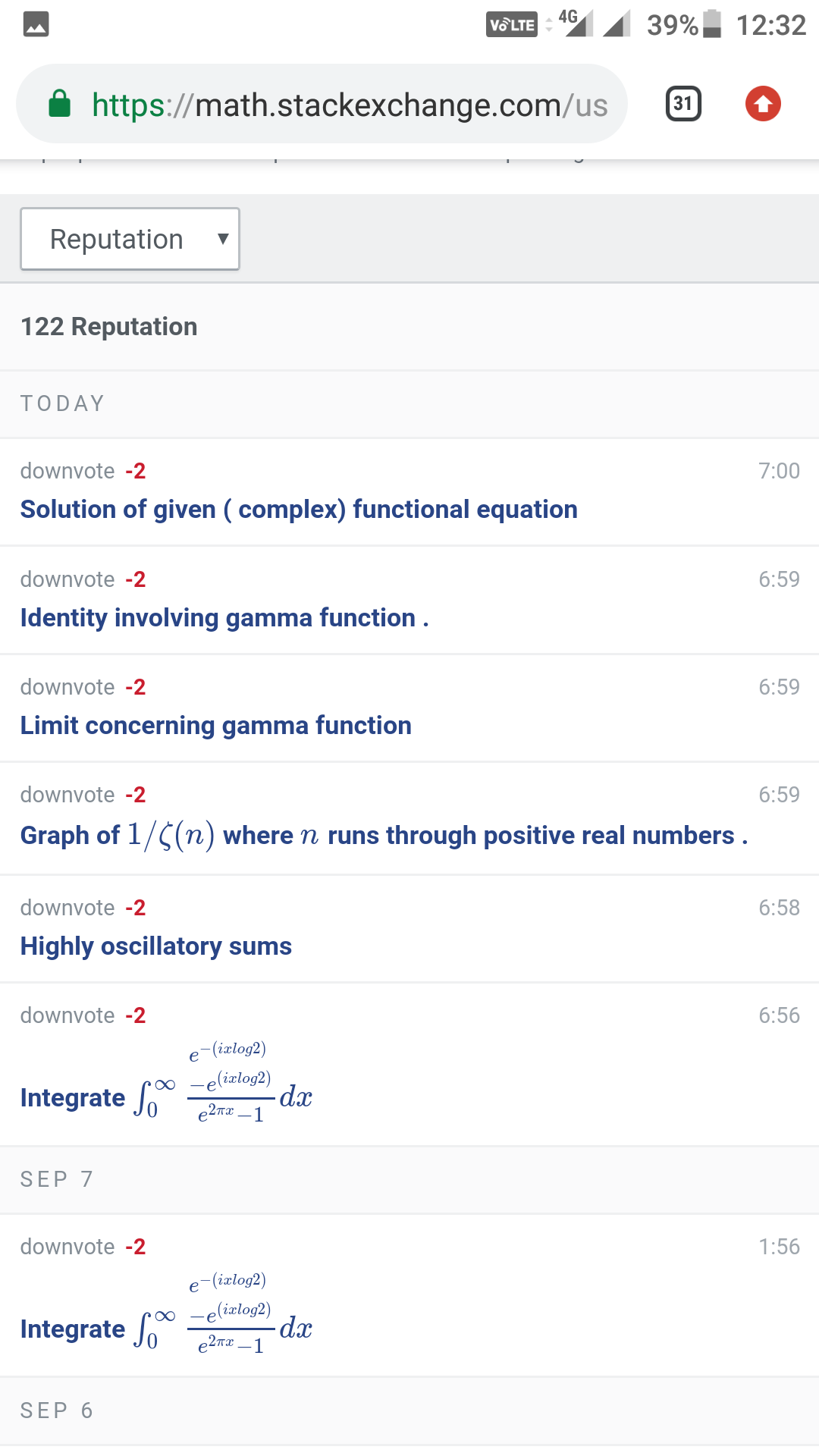 (4) Some elementary (fun but non beneficiary (to research)) questions are upvoted to like few hundreds. I don't see this a fit for this site as it is for research purpose, you can see a lot of them on site. (I'm not saying don't ask such questions but saying at least categorize such type and reputation regarding it.)

(I don't have greed for reputation it's just that here people judge by reputation so it's highly unlikely to get an answer to the question which is downvoted.)

I think this is a serious issue. Please do the needful.

(I don't wanna criticize anybody. Everyone is right at their respective places but personalized behavior is not good on a professional site like this.)

(Edit : I'd like to add one more observation : When I post a serious question on stack exchange without much of details it gets downvoted . But when I post the same question with details on overflow It get lots of upvotes . This happened with me a lot.

This could be a proof of serious ignorance !!?? )

First, let me stress that indeed the down-votes seem not good. It is basically never alright to down-vote in a string. (It is not even advisable to do this when each post does merit a downvote; I do not say this is the case here, neither do I say it is not the case here, it is a general point I want to make.) We will look into it. There is also a script that might undo it automatically.

Now, what you should do in such a situation is to raise a flag for moderator attention with the original account so that we can look into it. You could also have posted to this meta-site with your original account. You could have posted in the Math Mods office chat. Or, finally you could also have used "contact us" to get in touch with somebody at the site. (Maybe not all of this is obvious but at least one of these ways ought to have been discoverable.)

Further, you presumably got a page that offered some explanation why you cannot post questions anymore, something pointing you to the relevant help page on question bans. Did you study it?

Instead of doing something of the above, you created another account and posted an off-topic rant on the main site, while you were not even allowed to post any question at all to the main site. Right, you think this is all unfair and unjust, but if you think it's that handful of votes that is the problem that's a massive misconception. Maybe, not even this is clear, it was what pushed you over the edge, but it is not at all the main reason. A main reason should be your numerous (self-)deleted posts.

Thus, I recommend that you get familiar with what is and is not expected on this site and adapt your conduct accordingly. The main problem is how you used the site, the handful of possibly targeted down-votes is not alright but overall a detail, granted an annoying one but still.

You all wanna see what I'm talking about : 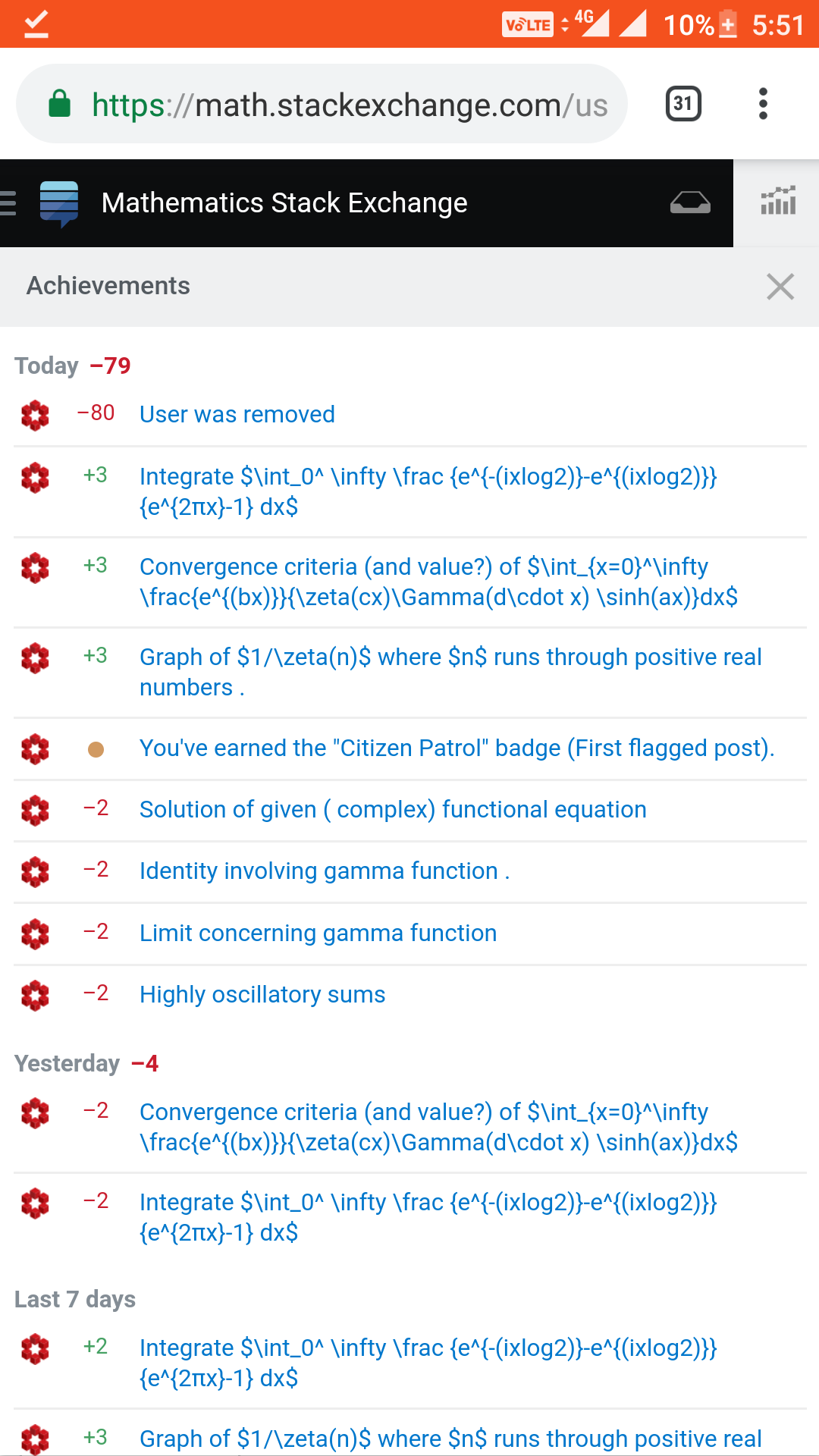 314
How to ask a good question.
26
A certain kind of serial downvoting?

9
Several downvotes on unrelated posts of mine in a short time period
8
Serial downvoting
9
Would splitting the site into more elementary and more advanced questions help?
42
Clever downvoting
79
Can we be nicer to downvoters?
72
Downvoting newbie user's questions