About a specific user not writing properly (Part ll)

6 months ago, I did notice that a specific user was not having an appropriate behaviour with our community:

About an specific user not writing properly

Days ago I end up in his profile 'by casuality' and I found a lot of unfriendly/unkind/inappropriate/rude/etc. comments again!

At some point two other users replied to him: 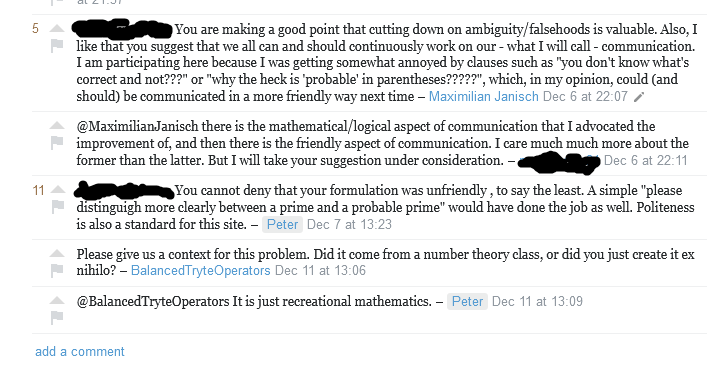 Notice he did not even apologize to Maximilian nor Peter, he just said "I will take your suggestion under consideration". 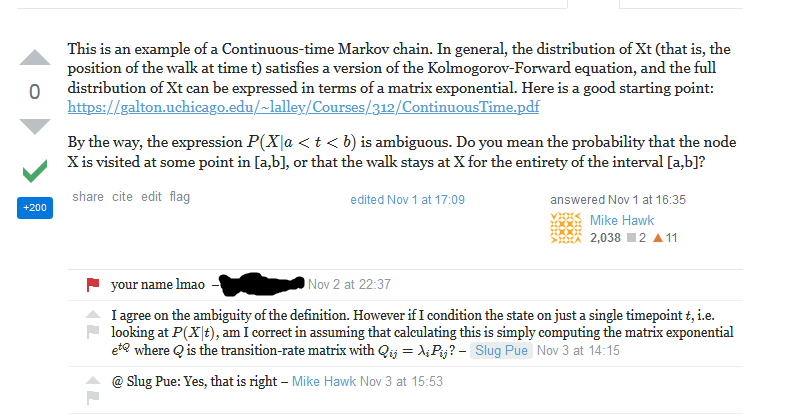 This time, all the flags that I raise were helpful and mod(s) remove all of his annoying comments (except 1., they just removed ????? to ? but they left heck... ).

This time I won't ask: What should be done about it? I really believe that something like a temporary suspension is required. As I said to mod quid in math mods office, if no strict actions are taken, then this user will continue writing mean, rude, undesirable comments and hence causing annoyance, not only directly but also indirectly, to Math.stack's users. But this is just how I see things. I'd like to know the community point of view about such situation.

I have been in this site for more than 2 years and I have never ever never found such a thing like that, such comments by a user. I have seen one per user every once in a millenium and that's it, never more than once.

I've just seen this comment (piece of) by this user (he commented this today, two hours ago):

"..., and I don't think it's bad to say unkind things -- nearly everything said on this site is unkind. (continues)"

How could someone say such things?

Please do something about it.

EDIT 2 I'm posting the 'complete' conversation (related to EDIT 1) so that things look fair. All this comments were deleted already. The black is hiding his name. 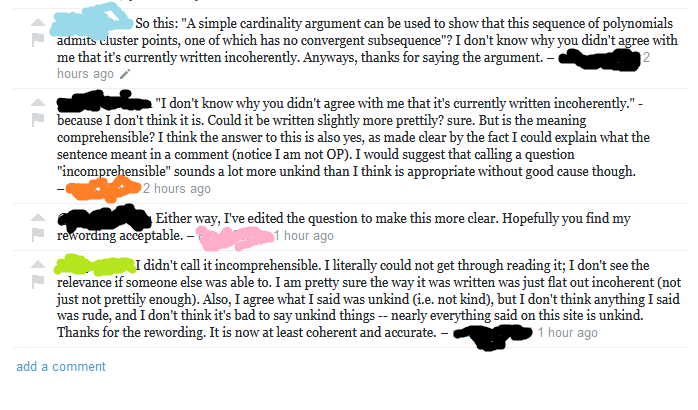 I think I'll leave this. I just wanted to stop him from continuing to leaving mean/rude/unkind/annoying/.../ comments on user's post and so making users feeling bad for reading such comments. And that's it.

He will keep doing so if no actions taken, and a proof to it is that HE DOESN'T THINK IT'S BAD TO SAY UNKIND THINGS, he said this just yesterday.

As one may observe, there are two kinds of rude comments in this site:

For persons who make comments of the first kind, one could simply learn the math, if any, from them and ignore the unnecessary arrogant "bullshit" part of it. Such comments could be flagged and would be likely removed by moderators if the mentioned questions/answers have been improved accordingly, as the comments would no longer be relevant.

For persons who make comments of the second kind, just flag them and then stay away from them as far as possible. Simply avoiding reading such comments would make your life much much brighter and healthier.

Not the answer you're looking for? Browse other questions tagged discussion specific-user .

0
About an specific user not writing properly

16
Why has Bill D. been hit with a 1 year suspension?
29
I have ~7 accounts. Is this OK?
15
User not formatting answers
10
Are there a “minimal requisites” that people should have to ask here?
10
Etiquette dilemma
0
About an specific user not writing properly