In MathJax, how can I get the index of a cube root of a tall expression to be at the right level?

In MathJax, the cube root of a displayed fraction comes out like $$\sqrt[3]\frac ab .$$ Typographically, there are four things wrong with this. The main one is that the $3$ is too low. It should at the top of the surd symbol, not near the middle. Is there a workaround for this?

The other issues, which I do not expect a workaround for, are:

(4)$\;$ the vinculum is redundant (of course, the \sqrt instruction calls for a vinculum, but there is no option to use the \surd instruction for a display fraction or with a pre-index).

While there are certainly different philosophies about what is the most aesthetic typesetting layout, MathJax attempts to reproduce as closely as it can the results that you would get from actual $\rm\LaTeX$. It is certainly imperfect in that, but the measure of what is "correct" for MathJax output (on $\rm\LaTeX$ input) is actual $\rm\LaTeX$ output.

With that criterion, I would say all four of your complaints are incorrect.

Here is the $\rm\LaTeX$ output for your expression: 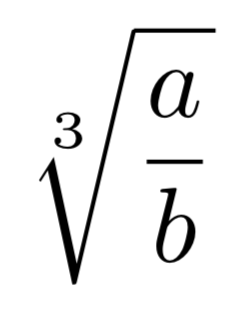 and this is the MathJax output in Firefox with HTML-CSS output (the results can vary across browsers and operative systems, and the CSS involved in the page). 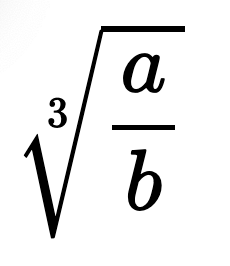 While not identical, these are very close, and indicate that all the things you complain about are in the actual $\rm\LaTeX$ output, and MathJax is reproducing those properly. The main difference is actually in the font used for the "3" (not the size or vertical placement). $\rm\TeX$ uses different fonts for each of the text, script, and script-script sizes (the smaller sizes are a bit wider than the standard sized font), while MathJax uses scaled versions of the main text-sized font instead (to reduce the number of fonts that need to be sent over the network to your browser). There is also a slight horizontal position difference horizontally here, but not the vertical difference that you are looking for. That has to do with the fact that MathJax doesn't have all the internal information that $\rm\LaTeX$ does, so the positioning algorithm in MathJax is not actually the same as in $\rm\LaTeX$; some improvement may be possible there.

As for (2), the surds come in five fixes sizes, plus pieces that can be used to construct arbitrarily large ones when the content is larger than the largest available fixed size. When the content of the root is between two of the fixed sizes, the larger size is selected, and that surd is centered on the content. That may mean that the surd extends below the bottom of the fraction, as it does in this case. In the image below, I have put a red bounding box around the fraction and a green one around the root (and drawn the root in green as well, so it is easier to see the relationship between the red and green boxes). Note that the green is reasonably centered on the red. 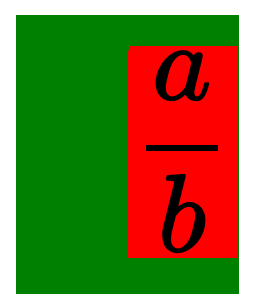 As for your third point, the placement of the numerator and denominator are as in $\rm\TeX$. The reason it seems unbalanced to you is that the $a$ has no descender while the $b$ has an ascender. That does not mean the $a$ should be closer to the fraction bar. Because fractions may appear next to each other (when multiplied, for example), $\rm\TeX$ goes to great pains to make sure the baselines of the numerators and denominators of adjacent fractions are the same. That is,

but I wouldn't recommend it, as it will be less accessible to those with assistive technology.

The upshot is, the MathJax output correctly mirrors the $\rm\LaTeX$ output, as it is intended to. Your own choices are personal preferences, but they are not the choices that Donald Knuth made for $\rm\LaTeX$. To claim that they are not "typographically correct" is to disregard the fact that $\rm\LaTeX$ is a publishing industry standard, and has been for decades.

Don't know if this substantially better. If your custom is to use the \sqrt[#1]{#2} construction instead of my preferred (straight from the $\TeX$book) \root{#1}\of{#2} that probably works too.

Undoubtedly other finetuning is also possible.

Experimenting with the \raise[n pt]{} construct:

3720
MathJax basic tutorial and quick reference
15
scaling root problem
1
Is there a way to get higher-root symbols to render correctly when rooting a fraction?
0
Vertical space between superscript and square root sign

3720
MathJax basic tutorial and quick reference
2
How can I get to the place where I can vote?
6
How can an inactive user get the Marshal badge?
14
How can I write backslash in MathJax?
6
How can I write the left and right sides of the equation in different sizes?
1
How to do right alignment with MathJax?