There is a site for searching formulas on stack exchange called SearchOnMath. On the site you can see an option called "Add Formula" click on that, then you can choose any symbol you want and the site display your formula and also its MathJax code. For example, when I want to write system of equations or matrix in my posts I simply refer to the site and after selecting symbols and typing letters of the formula I simply copy and paste the MathJax code on the MSE site.

It make me think about if we bring the feature (Add Formula) to MSE somehow, it can make life easier for all the users. Considering how many people have trouble with writing MathJax formulas (specially new users), this feature should be very useful for the site.

The choice how to enter formulas is a matter of taste. For example, since I have years of experience using LaTeX, by far the easiest way for me is to enter the formula in MathJax. I remember some users here on meta mentioning AsciiMath, I can imagine that it would be a rather fast way to enter a formula for somebody who has enough experience with that format. And, naturally, if somebody has no experience with MathJax/LaTeX, it might take some time to learn it and such user would probably prefer something similar to CodeCogs editor or some other formula editor.1 (Various editors often include some unnecessary stuff - the MathJax code could be written in a cleaner way or shortened - but I do not consider this a big problem.)

As already mentioned in comments, there were some older suggestions to incorporate some kind of MathJax editor directly into the built-in editor on Stack Exchange. (For example, WYSIWYG for math formulas? or How to increase service/traffic, a set of suggestions.) In my opinion, this is unlikely to happen.3 (And I am not really sure whether this would be a good idea.)

A better solution to me seems to let know the users (especially beginners) that they can use some other site or application to write formulas, if they prefer to enter mathematics in some way other than directly writing the MathJax code.4 However, I'd prefer a link to some post here on meta summarizing various WYSIWYG-like ways to enter the formulas and include the use to this post. (In this way, the information does not have to restricted to one specific editor. Moreover, in case some editor stops working, a post on meta can be updated by regular users, while a link in the edit window can be only edited by a Stack Exchange employee. The same is true for editing the help center, with a few exceptions which can be edited by the mods.)

Proposal. So this would be a version of your suggestion to "bring the feature to MSE somehow" that I would support:

1Several such editors are mentioned in the Wikipedia article formula editor. Some of them even have a separate article on WP, see the Category:Formula editors. If we want to create a FAQ post about such editors, link to the Wikipedia article probably should be included. I will point out that apart from editors where you can edit a single formula at the time, there are also various editors which might be useful if somebody wants to prepare the whole post in some editor rather than directly here on the site. Several such editors are mentioned here: MathJax: better way to prepare a Math.StackExchange question?

2I found this post on Stack Apps: Math buttons for sites without MathJax support. I have not tried the script - so I cannot confirm whether it still works. And it is unlikely that it will still be working after Stack Exchange switches to the new editor. You can see some screenshots in the linked post. However, this script is intended for sites without MathJax - as explained in the post, it is for entering some common math symbols as HTML.

3Very recently there was this post: Opt-in alpha test for a new Stacks editor. (It is still shown in the community bulletin among the posts featured on Meta Stack Exchange.) I'd say that this post gives you an idea which modifications of the Stack Exchange editors are currently considered.

4Even if using various formula editors might be easier for new users, I still think that knowing MathJax/LaTeX is useful for somebody who often uses this site. For example, if you want to subsequently edit your post, it is much easier to edit the source than entering the formula again from scratch. It is also useful for searching. For example, you might enter MathJax formula in the built-in search on this site or into Google. While various search engines for math (see: How to search on this site?) usually have some kind of editor for entering math formulas, if there is an option to enter directly LaTeX, it offers the users more control on the search query.

5I was able to find these ones: Latex editor suggestion and WYSIWYG for math formulas?. On the main site: Free software to create equations and export to various formats.

6Here is a screenshot showing what I see on the right after I click on Ask Question. I was a bit surprised that the link to the MathJax tutorial isn't included in the section name "Helpful Links". (I thought that it was added there when this change was implemented: Show “how to ask” advice before a new user asks a question. But it seems that I misremembered it and this link was only included into the info shown to the first-time askers.) 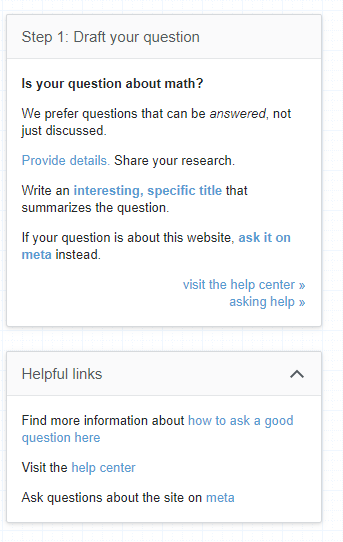 65
How to search on this site?
22
MathJax: better way to prepare a Math.StackExchange question?
39
Show "how to ask" advice before a new user asks a question
10
WYSIWYG for math formulas?
8
MathJax WYSIWYG Editor
21
Change the link to search in modal window for the first-time askers
7
Latex editor suggestion
-12
How to increase service/traffic, a set of suggestions