While thinking about these two meta questions

How can I combine the solutions to these two meta questions to render an enlarged version of $$\sqrt{\text{Nested} \sqrt{\text{root} \sqrt{\text{problem}}}}$$ with even vertical separations above and below the middle square root sign?

The solution of question 1 suggests putting \Huge{…} inside the square root sign.

Its unclear to me what you want this for, but if you only want to adjust MathJax output as it appears on your computer, there is the Right click > Math Settings > Scale All Math... option available in the drop down menu that appears when you right click on some rendered MathJax. This will rescale all MathJax on a page. Here is a picture of the dropdown menu 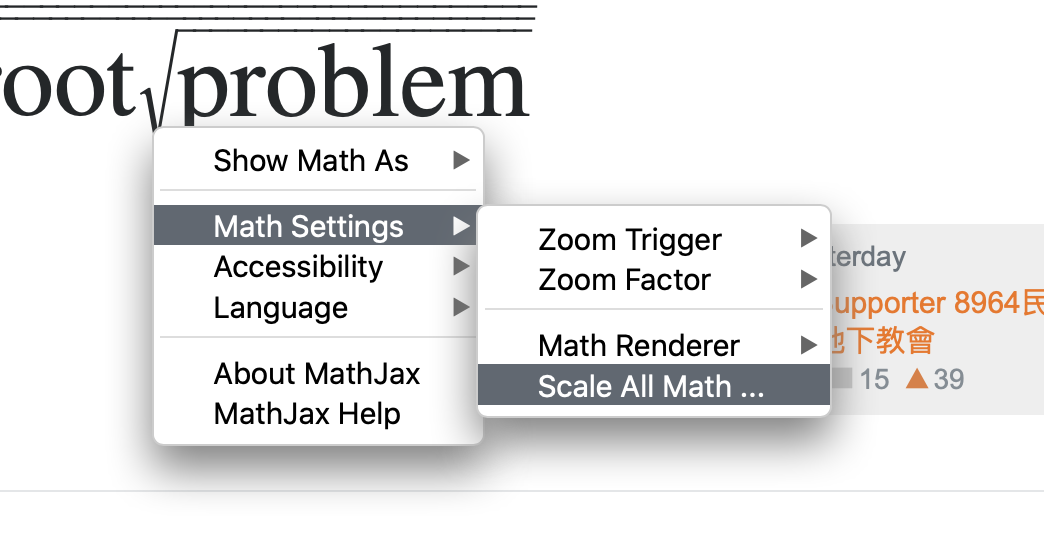 Clicking gives me the following prompt

and here is the result when I input 500%

which may be good for occasional use; if you want to have the option on more-or-less permanently then 200% is quite usable . There is also the Zoom Trigger and Zoom Factor options in the drop down menu (visible in above screenshot) that are similarly or maybe more useful

The good thing is that this is a true rescaling of the original smaller output. In particular, if the output at the more 'usual' size (and hence more likely to have been tested by the MathJax dev team) is correct for you, then this will continue to be correct. When you put tall things inside a squareroot, such as \Huge modified math, the tail tends to be adjusted in other ways. Of course, no other computer will see the change.

The problem appears to be specific to \sqrt having a non-standard size-modifier, e.g. \Huge.

We can copy/paste the MathJax-rendered expression to see that it uses the √ character at the start of the radical. It seems like the rendering would be correct if √ were rendered at the default-size, \normalsize, but applying another size-modifier to it messes it up.

As a partial work-around, we can define

, then use \Sqrt instead of \sqrt.

The drawback to putting \normalsize before \sqrt is that it strips out the external-size-modifier for the internal-content as well as the radical, requiring \Huge to be written several times above. If not for the apparent bug, then

Clarification: Why does it appear to be a bug with respect to √?

This answer's tl;dr begins with:

Looks like the core problem is MathJax inappropriately applying a size-modifier to the implicit √-character that it uses to render the radical.

The problem is not with the scaling of the surds, but with the placement of the overlies. This is a bug in the HTML-CSS output, but changing to CommonHTML or SVG will produce the desired results.

@DavideCervone's comment points out the apparent situation while I'm suspicious it may be something else, so figured it'd be good to clarify the apparent discrepancy.

First, to acknowledge the point: if we look at something like $$ {\boxed{ \Huge \sqrt{\text{Nested} \sqrt{\text{root} \sqrt{\text{problem}}}} }}_{,} $$ then the most obviously wrong part appears to be the line through the top of $`` \text{problem} " ,$ rather than anything directly with a √-character. I agree with this observation.

So, here's my speculation about what happened:

If my guess is correct, then these things should be observable:

As a practical fix for the MathJax maintainers:

Hard to be sure that this is necessary the problem/solution without looking at the code and such, but this'd be my guess. I hope the observations help to communicate ways in which the renderings would seem to reflect this hypothesized issue.

Not the answer you're looking for? Browse other questions tagged discussion mathjax .