Short and helpful advice on using MathJax on the site ...

The point of this question is to give people a chance to draft their best MathJax tips for new users. Perhaps this question will stand alone as one of the places to go. Perhaps the material in the answers will be edited into an introductory article. Perhaps it will flop. Who knows? But the whole idea is to pool knowledge and experience to help those who are learning.

The goal of this post is to outline the absolute basics of how to typeset mathematics using MathJax, without any prior knowledge assumed.

Introduction: when asking and answering questions, it makes your writing much clearer if you typeset the mathematical notation using the markup language MathJax. Compare how the quadratic formula reads with and without it: $$ \underbrace{x=\frac{-b\pm \sqrt{b^2-4ac}}{2a}}_{\text{With MathJax}} \quad \underbrace{\text{x=-b+-sqrt(b^2-4ac)/2a}}_{\text{Without MathJax}} $$ This tutorial serves as a brief introduction to how MathJax works, and how you can use it. A more comprehensive overview of the subject can be found here.

1. Getting started: in the body of your post, you can typeset formulas by putting two dollar signs $$ before the formula, and after the formula: 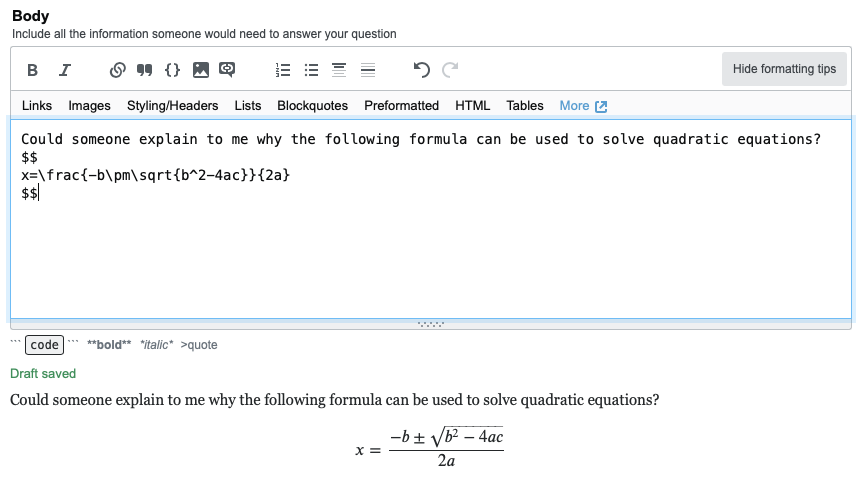 Be careful not to leave an empty line between the formula and the dollar signs. In the above example, the formula is displayed on a new line. This is known as a 'block formula' or 'displayed formula'. It is possible to write out multiple lines of equations. Each time you want to go onto a new line, you have to indicate this by typing two back-slashes \\: 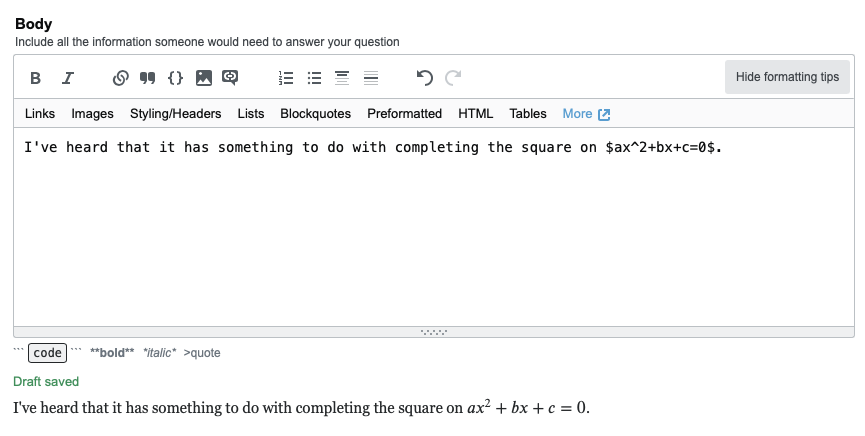 This is known as an 'inline formula'. Rather than enclosing the formula with two dollar signs, you should only use a single $ at the start and end of the formula. You can also use inline formulas in the title of your post (but not block formulas).

2. Understanding MathJax syntax: since MathJax is a markup language, there is a syntax that you have to follow. Simply enclosing x=-b+-sqrt(b^2-4ac)/2a with dollar signs does not do the trick: $$ x=-b+-sqrt(b^2-4ac)/2a $$ Instead, there are a set of commands that have to followed in order to typeset the equations nicely. The rest of this post will focus on the most common ones; a more comprehensive list can be found in the main tutorial.

In general, if you want to see how a formula was rendered, then right-click on it, and press 'Show Math As', then 'TeX Commands':

If you're wondering how to type a specific symbol, then Detexify is the tool for you. It allows you to draw a symbol, and finds the closest matching command for it. (These commands are not guaranteed to work in MathJax, but they are likely to.) 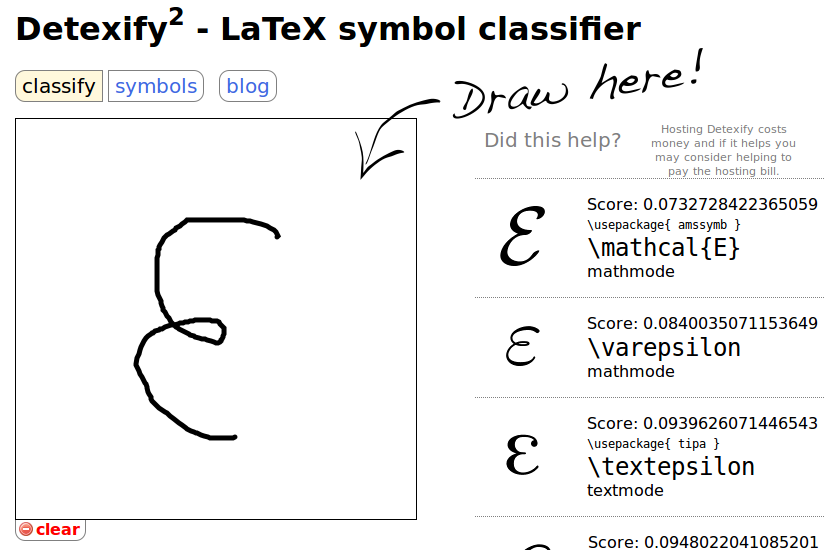 For multiplication and division, there are a number of options:

4. Functions: to write out a function such as $\sin(x)$, you have to use a backlash: \sin(x). You can also omit the parentheses by using curly braces instead: \sin{x} renders as $\sin{x}$. Alternatively, you can leave a space between the function and the argument: \sin x also renders as $\sin x$. Other functions such as $\ln x$ and $\arctan x$ can be typeset in much the same way. Again, if you are unsure about what the command for a function is, then right-click on it, and press 'Show Math As', then 'TeX Commands'. You can often guess the MathJax command for a function: it is no surprise that \exp renders as $\exp$.

5. Chaining syntax together: more complicated-looking formulas in MathJax are often built from simpler ones. The formula $$ \frac{1}{x}\sqrt{\frac{1+x}{1-x}}\ln(\frac{2x^2+2x+1}{2x^2-2x+1}) $$ looks unpleasant to typeset, but is actually simply composed of three simple expressions:

Notice that the MathJax editor has no problem with putting a fraction inside of a square root, for example. One aesthetic issue with the above formula is the odd sizing of the parentheses in $$ \ln(\frac{2x^2+2x+1}{2x^2-2x+1}) $$ This can be remedied by replacing ( with \left( and ) with \right). If we change the code to

Do check the preview to see if what you typed is indeed what you wanted to say!

Do edit your current post to include Mathjax when someone sends you to this page, instead of asking a new question or posting a new answer.

Don't upload pictures of maths that can be easily typed!

Don't use \dfrac,\limits and \displaystyle too often.

This answer focuses on calculus notation. I have broken this section off from the beginners tutorial because I'm not convinced that it is essential for new contributors to be aware of the following commands. Personally, I have no issue with a beginner writing "how do I integrate $x^2$" as opposed to "evaluate $\int x^2 \, dx$".

Calculus notation: this section briefly covers some of the most commonly used notations in calculus, namely series, limits, derivatives, and integrals. To begin with, a series such as the one below can be written using the following commands:

$$ \sum_{n=1}^{\infty}\frac{1}{n} = \infty $$ This is another example of when you need to use both an underscore _ (for the lower bound) and a superscript ^ (for the upper bound) to properly format the sum. Integrals follow the same pattern:

Limits can be typeset using \lim and are usually accompanied by an expression that indicates the value that is being approached. Again, you have to use an underscore so that things are positioned correctly.

Not the answer you're looking for? Browse other questions tagged discussion mathjax new-users .

3630
MathJax basic tutorial and quick reference
304
How to ask a good question.
46
Guidelines for good use of MathJax in question titles
15
Can I post a 'homework' question without any MathJax/Latex.
13
Huge $\sqrt{\text{Nested} \sqrt{\text{root} \sqrt{\text{problem}}}}$
15
Is there a shorter and more opinionated version of "How to ask a good question?" that we can direct new users to?
17
User keeps posting questions with posted images, instead of writing the question themself.
-6
I don't like the way my current question was treated.
7
What MathJax commands are most often used on this site?
28
Can we have a MathJax tutorial specifically for new users?
See more linked questions

17
Using the align environment?
29
Using MathJax/TeX in the titles of questions - yes or no?
30
Is sharing the site among fellow students helpful/desired?
16
MathJax is breaking in short expressions frequently today.
7
Using text and MathJax instead of screenshot.
3
How to put 2x2 matrices in the denominator and numerator using MathJax?