When and why is there traffic on MSE

I am wondering if

(a) Is there really more traffic when I visit in the evening, or is it my imagination playing tricks on me?

(b) Is my hypothesis true?

(c) Where, if possible, can I access statistics of this nature regarding MSE, or any statistics at all regarding this site for that matter?

I do not have real answers to your questions, but perhaps I can at least give some pointers to some data.

Traffic depending on the hour of day

As I have mentioned in the comments, there are some related posts on this meta: Is there a way to find out when the traffic on math.se is the heaviest? or Best time to ask a question. There are also these feature requests on Meta Stack Exchange: How many SO users are online? and View approximate number of users online.

I would consider activity in chat at least somewhat reasonable approximation of the activity on the main site. For example, you can check how the activity in the Mathematics chatroom depends on the time of the day. 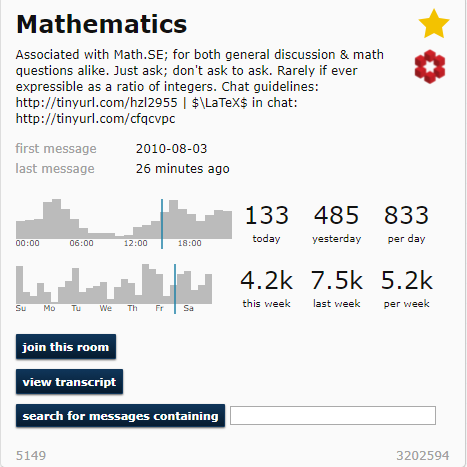 As mentioned in some other posts, you can get at least some data from SEDE. The database does not contain data about number of users who are viewing the site. But at least we can check hoe many comments or posts. Here is a graph showing number of comments. (You can change the parameter frequency to switch between hour, weekday and weekday+hour.) And you can get a similar graph for number of posts (questions, answers).

There are some site analytics available to 25k+ users - but they do not include location of the visitors. I would assume that Stack Exchange employees have access to full Google Analytics.

There are also some blog posts on this topic - but they seem to be concentrated on Stack Overflow: Where In The World Do Stack Overflow Users Come From? (January 2009), Stack Overflow Around the World (April 2011).

For example, Alexa shows USA, India and Japan as the countries with the most visitors for Stack Exchange - but I do not see some place where this is shown for Mathematics Stack Exchange

Again, we could use SEDE. See also: Where in the world do Stack Overflow users say they are from?

This comes with the caveat that many users do not fill in the location field in their profile. Some only include city, some include country. Various things appear in the location field - for example, Europe and Earth are quite popular. Some users might have used some different alphabet - Cyrillic, Chinese, Greek, etc.0

But perhaps with some care one could get at least approximate results. (For example, making sure that we do not count people from Georgia (U.S. state) into users from Georgia (country) and various similar problems). I have created at least some query with counts of users from various countries. (There is certainly a lot of space for various improvements. I have based the query on the one posted here: How can I write a query DATA.SE to list top users from all countries in the world?) Based on this query, USA and India seem to be the countries with the most users.

Not the answer you're looking for? Browse other questions tagged discussion feature-request statistics .

33
Best time to ask a question
9
Is there a way to find out when the traffic on math.se is the heaviest?
1
Are most of the SE users American? (And can SE publicise itself more?)

1
Should Reputation from mathoverflow be carried over.
14
Number of answers/views/votes depends on hour of posting
31
Should we ask for Question Quotas like those that have been available for the big three?
9
Is there a way to find out when the traffic on math.se is the heaviest?
22
MO-MSE tag incompatibility
6
Is The Enthusiast Badge Internationally Fair
4
A statistical question about statistical questions
16
What are the merits, if there is any, of deleting (correctly) answered questions in the main site of MSE?