Here on Math.SE, I see that we use serif fonts for titles, as evidenced by the main page of questions. Nonspecific screenshot: 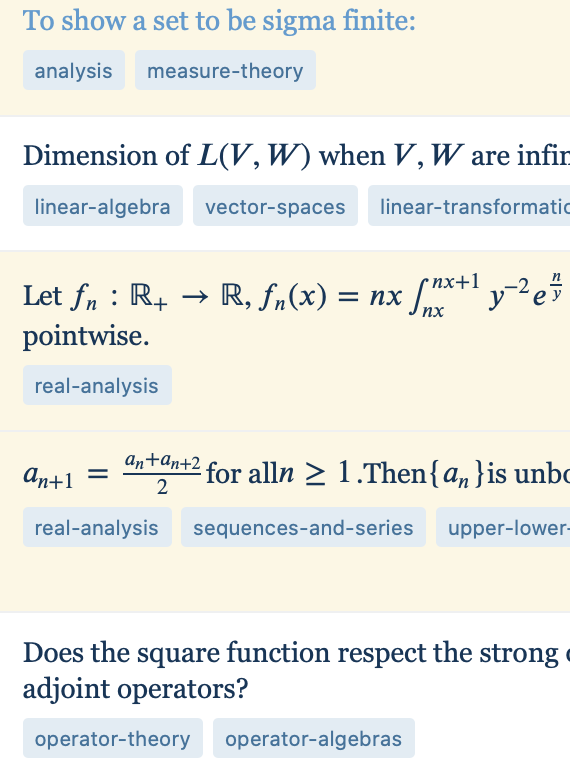 But titles appear in other places; in at least two of those, they are rendered with sans-serif fonts. Namely, in the list of Linked/Related Questions, and in the Review Queues: 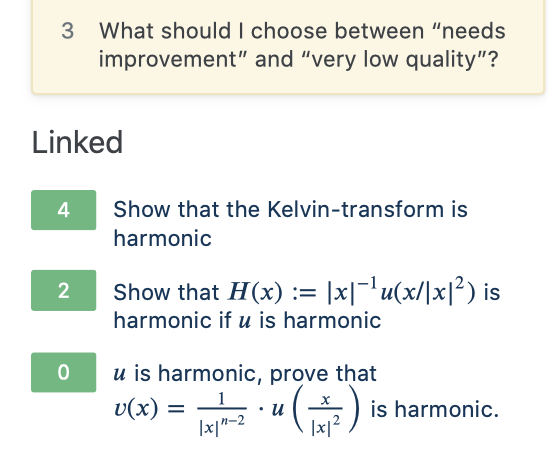 Screenshots all taken on a Mac. I assume this is something that was overlooked. Can we make this consistent?

Important related question but over 10 years ago: New design: On the use of sans and serif faces I guess it wasn't consistent before, but the new font choice is making it very obvious.

I agree that the current inconsistent situation is not ideal, but at the same time I do not see what exactly is proposed.

Yes, question-titles are displayed inconsistently, but what should we do exactly?

It seems to me the suggestion is to switch the display of titles to the serif font used for posts. But then, for example on the activity page, it would be inconsistent with all the other elements of the site. I am pretty sure SE will not change everything for our site.

For context, as GEdgar points out most sites use also a sans-serif font for titles, and indeed consistently.

Some venerable sites, like ours, had a custom design with a different font, this was preserved to some extent when the design of the sites was redone and harmonized a few years ago (that's another "new design" then the one linked in the title). However, shared elements follow the standard SE design. It is likely also worth pointing out that in the mobile version of the site the font for posts is sans-serif too.

Thus, arguably what creates the inconsistency is the fact that posts (and some related elements) are in a custom font. If the goal is consistency I think that we could get rid of it by asking to switch to the standard sans-serif font for posts. But some might not want to lose the custom font.

The point of harmony with MathJax was invoked. To the best of my knowledge it would be possible to get the same (or at last a similar) sans-serif font for MathJax, too. Yet then, I dimly recall that on MO, where posts are in sans-serif since the beginning of time if I recall correctly, and in any case they are now, the fact that the font of MathJax is a different one had been considered as good by some (for reasons of having a visual marker for parts that are formulas).

Thus, as is, the proposal seems hard to realize. If you want to follow up on this I suggest that you start a "discussion" on the subject of fonts on the site. Maybe not instantly but only in a couple of days. As said, the actual decision is likely one between keeping the status quo or switching to all sans-serif.

The font used question titles varies among the various stack exchange forums. Math.se has a serif font, as you noted. But for example Academia.se has a sans serif font:

On the other hand, it seems that the items in the right sidebar use the same (sans serif) font everywhere.

12
New design: On the use of sans and serif faces
3
Double struck 1 in Mathjax

12
New design: On the use of sans and serif faces
13
What is the font used in Math.SE?
5
Is it possible to change/enlarge font?
23
Why does the font use text figures (“lowercase digits”)?
4
On question titles
4
Excessively long question titles
4
Preview for titles for sites with MathJax
1
Font size in new theme?
6
Lower-case blackboard bold displays inconsistently