Am I, as a comment flagger, a waster of the moderators' time?

I am a novice SE user, a toddler. In this post I want to criticize some moderator actions, which seems risky and futile, regarding unwritten policies on the meta; however, just for the record, I write this post so that unbiased readers find it helpful.

Please note that I am not throwing a tantrum and that I have slept enough, so it is not needed to say to me, "It is time for you to go to bed, nighty night."

what's up? Why are you crying again?

I, as a one being interested in contributing to the community but lacking enough math knowledge to create high-quality math content, decided to suggest grammar-fixing edits. But, many community adults ordered me not to "tinker", so I had to follow their order and stop fixing the grammar of posts.

After that I decided to do some unpaid janitorial task, flagging unnecessary comments, regarding that there is an option for such comments when one flags a comment and that the following excerpt from the comment guideline confirms such flagging:

(Also, this community manager's answer may be helpful).

After cleaning up many threads, the moderator team made two actions against me, which are criticized in this post:

First, they contacted me privately sending the following message:

... these comments are inoffensive and, while they are not strictly needed any longer, they are not causing harm to the site. On the other hand, it takes time for us to handle your flags. In the future, please think about whether or not a comment's deletion is worth the time of the moderators before you flag it.

Second, they rejected a huge number of my flags, which seems to have been deleted by the moderator(s) rejecting such flags. Since deleted comments cannot be seen by users except moderators, I cannot prove the claim to you (I think the moderator team would not deny it); however, let me put a screenshot of my declined flags here: 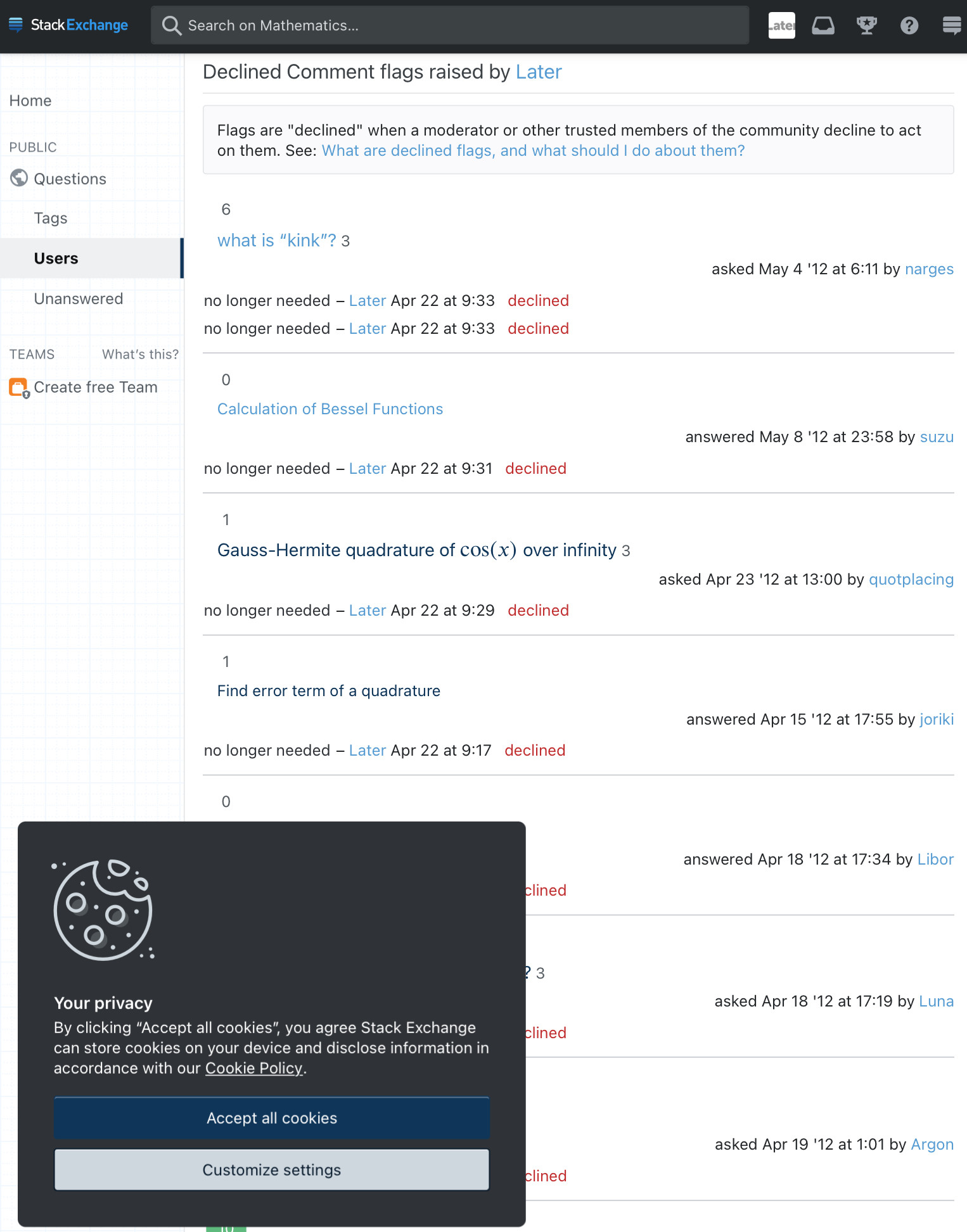 Finally, let me answer your question, "Why are you crying?" I am crying because I was treated like the following:

Suppose that you live in a city in which there is a rule asking citizens to keep it clean. You decide to keep the city clean by taking trash into a trash can for free. After you being tired, a mayor shouts at you, "Why do you waste our time? Trash cans must be emptied." Then the mayor empties a trash can onto your head.

P.S. Although this post may seem harsh to the moderators, let me appreciate their efforts for moderating this community and handling meta issues. Please note that if I disliked the moderators, I would have never criticized them to continue making mistakes so that they would not improve themselves.

It is reasonable and desirable that you can come here to Meta to ask about what you perceive to be "unwritten policies," and it is true (as noted in comments) that StackExchange Communities vary as to policy priorities. You seem motivated to help the Math.SE Community, and I appreciate your effort to gain understanding.

In this case the articulated point is that there could be better uses of Moderators' time and also of your time. Of course you are allowed to use the allotment of daily Comment flags according to your own judgement, but you have claimed in the midst of your post:

(Please note that many comments are handled by the system).

That was not my understanding. There are no Review Queues for Comments, but as noted by quid and others below the "conversational" (no longer needed) flags on Comments can under some circumstances result in an automated removal. Here's a relevant part of a Meta StackExchange post:

If a comment is flagged by a sufficient number of users, it will be automatically deleted. There is no penalty for this. Flagged comments will be surfaced to moderators, so if you have a problem with a comment, flag it.

In the StackExchange model of Q&A posts, all comments are considered ephemeral. Thus ideally any important information in Comments gets transcribed either into a Question or an Answer post for the sake of posterity. But adherence to this ideal suffers both for temporal and practical circumstances.

Something that may have a conversational tone to you reading it years after the last activity on a Question may have served a purpose at the time that is not now obvious. But equally it may have pointed to open issues that were never fully resolved. Who would make the decision?

My own experience is that I rarely have an urge to offer such flags, mainly when there has been a decisive clarification of some issue with a Question or Answer and leaving the "no longer needed" Comments up would invite confusion as to whether the resolution took place. Indeed I'm more likely to prune my own Comments than to flag those made by others.

A focus on current Questions and and Answers is normal, but of course you may find in searching for previous posts that there is something that is worth improving. Weigh the benefit to Math.SE Readers of flagging old conversational Comments versus researching a problem that you are interested in, and I think you'll find the latter is typically a better use of everyone's time.

Point of this answer: I wish to discuss a more fundamental idea, that is , on why people comment such ways.

I think the problem is that, at least culturally, mathematics stack exchange has evolved from a question and answer site into more of a community.

A community is a social unit (a group of living things) with commonality such as norms, religion, values, customs, or identity. Communities may share a sense of place situated in a given geographical area (e.g. a country, village, town, or neighbourhood) or in virtual space through communication platforms.

And you see, when you have such a community, it's not just the question and answers but also the askers and answerers themselves which are valued. Hence, comments appreciating or depreciating an answer are expected. Since, we are of course people.

This may seem to some that it compromises stack exchange's advantage over other platforms such as discord, reddit , Facebook etc; I.e. that of focused Q&A. However, I'll say that it doesn't because the vetting process on stack exchange is that much stricter, proactive and transparent than the ones on any of the mentioned sites. I genuinely believe that it is not easy for someone to use mathematics stack exchange because of the difficulties of understanding the culture here, learning mathjax and having and keeping a learning attitude.

Finally, I do agree with the sentiment that there is a bit of a disconnect between the written rules and how the rules are applied in practice but I suppose that kind of exists in any place with rules.

A personal comment I'd like to say is that I highly appreciate how passionate you are about the site and I wish that there will be more people like you in the future who are able to write thoughtful criticisms and contemplate policy deeply for mathematics stack exchange.

Note: The above is simply how I view the situation, if you have criticisms on my views, I invite you to comment on it so that I can improve my views and answer here.

Not the answer you're looking for? Browse other questions tagged discussion comment flagging moderators new-users .

36
Do we want accepted answers unpinned on Math.SE?
16
Surge in inexplicably declined "obsolete" flags
21
2020: a year in moderation
2
Any comment limit?
-7
How are policies, norms, and rules are determined in this community?

11
What are those flags in the mod-tools good for? When and how should I act on them?
24
Is it time to expand the moderator team?
20
Wrongfully declined flag?
13
What should the offensive and spam flag be used for?
11
Do moderators see previous flags on a post?
6
How should I flag large arguments in comments? When there is a large argument in comments, should you flag each comment or just one?