Update: I later found that anything I edited on Main didn't render properly in Preview. On a whim, I de-activated the LocalCDN plugin I installed after seeing a-super-easy-way-to-speedup-mathjax-loading-with-localcdn-add-on on Meta. Everything is now fine and my edits are previewing with alacrity.

I was editing am301's answer on this question and found that the Mathjax didn't render properly in the preview window. I have since copied the answer into a new question from where this screen shot is taken: 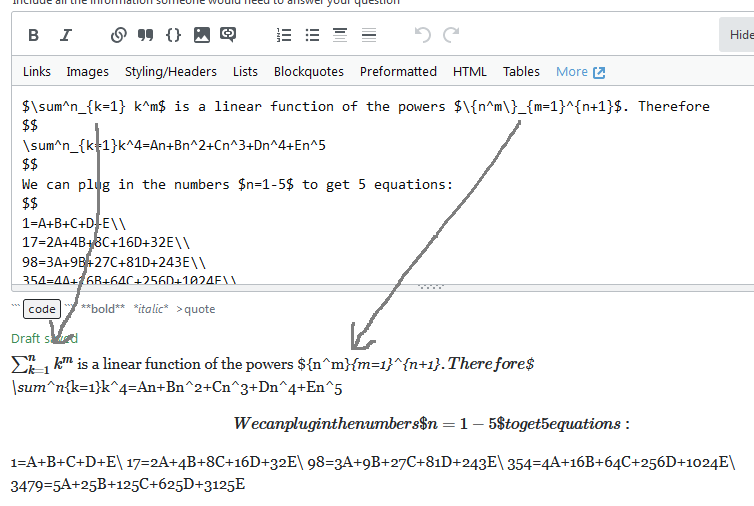 You can see that the first sum is rendered correctly but the second formula is not, nor are the subsequent ones. The peculiar thing is that if I copy it into the sandbox on Meta, it all renders perfectly. I'm using Firefox on Windows 7 and I've tried different Mathjax renderers.

What is causing the Mathjax to be rendered incorrectly, and why is it different on Meta?

Following some more experimentation, I found that anything I edited on Main didn't render properly in Preview, and it didn't always work on meta either.

On a whim, I de-activated the LocalCDN plugin I installed after seeing a-super-easy-way-to-speedup-mathjax-loading-with-localcdn-add-on on math.meta. Everything is now fine and my edits are previewing with alacrity.

I have had a quick look on the localcdn website to see if it says anything about unsupported versions of Windows etc, but there's nothing.

Not the answer you're looking for? Browse other questions tagged support mathjax editor .