Is there any way I can access the data of what fraction of questions are being closed as dupes per month. So, for example, I want to compare how many Qs posted in January this year was closed that month itself vs the January of last year.

For such inquiries, SEDE seems like a reasonable tool. I have tried to do some queries - I have no doubt that they can be modified and improved in various ways.

Description of the queries posted below

You might notice that - among other things - the queries return the number of questions which have been closed within 30 days. You can change this parameter - for example if you want to see how many questions were closed within 1 day or within 10 days etc.

Other parameters which can be changed are the dates - for example, you can look only at the questions posted since the beginning of 2021 to the end of January 2022, or some different date range.

The queries also include the percentage of questions which were closed - without any limits on the date of closure.

In all these queries, the questions are grouped depending on the month when they were posted.

This is what I got: Percentage of questions closed within n days (This link shows the query with the default parameter n=30.) 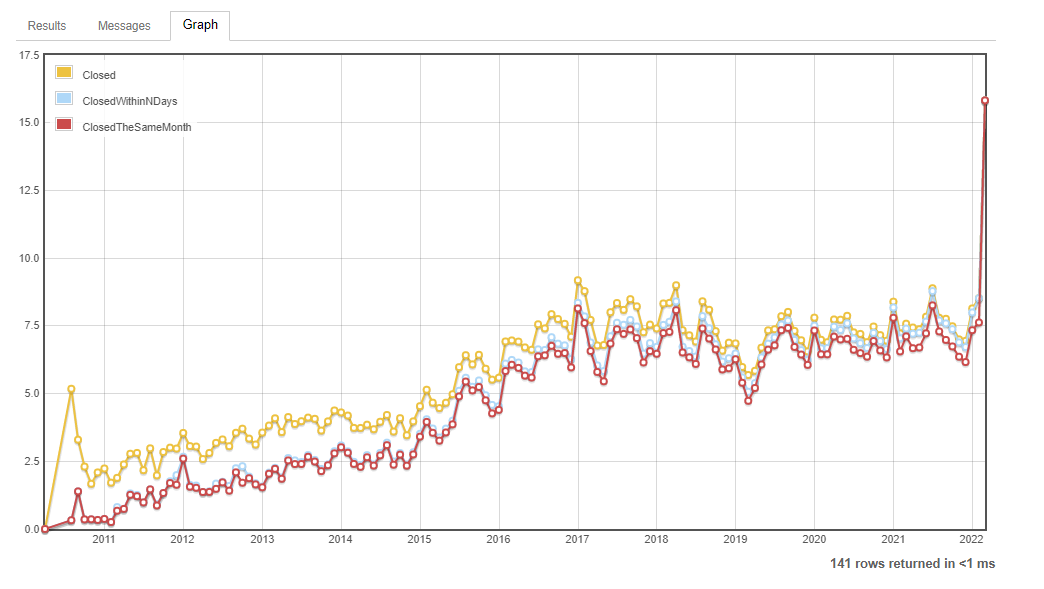 However, this only returns the questions in the table Posts, i.e., the questions which haven't been deleted. Probably more interesting is to look at the data which include deleted questions, too - this can be achieved by using the PostsWithDeleted table. 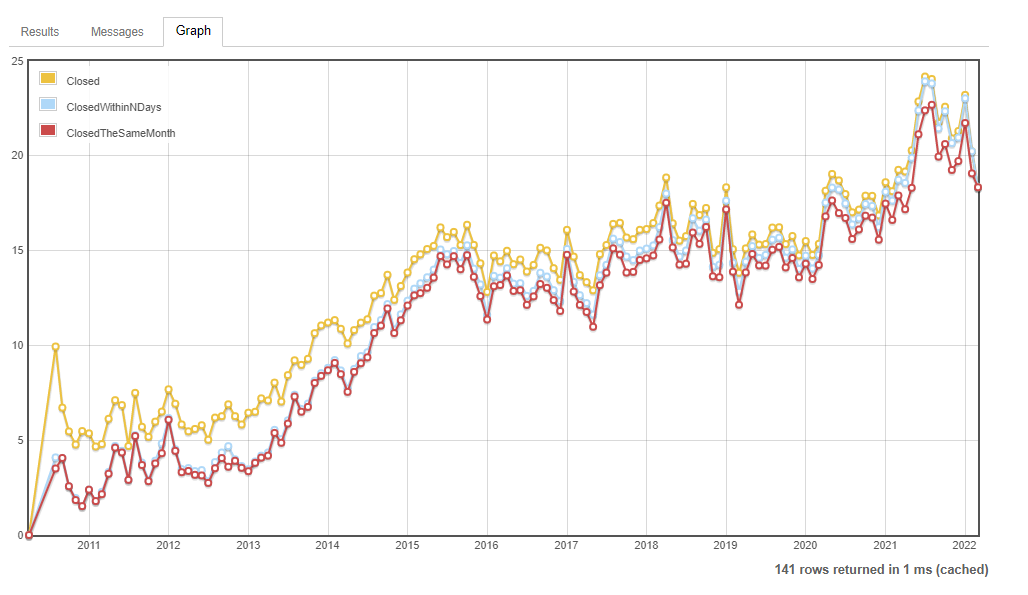 I somehow missed that the question includes the requirement to look at the duplicate closures. To get the duplicates I could perhaps use the PostHistoryTable where close reasons (including duplicate) could be found. However, if I tried to identify the duplicate closures in this way, I would not be able to get the deleted posts. That's why I have tried to do this using the PostLinks table - to the best of my knowledge, that includes the deleted posts, too. (In fact, this was reported as a bug on Meta Stack Exchange. But for our purposes, it is useful that this table contains also the data about deleted posts - so I am not sure whether I would consider this a bug.)

If we're using the PostLinks table, it is important to include also the condition LinkTypeId=3 - so that we only count duplicates (and not all links). Originally, I did make this mistake - but I have updated both the queries and the included pictures since then.

This is what I get for the existing posts. 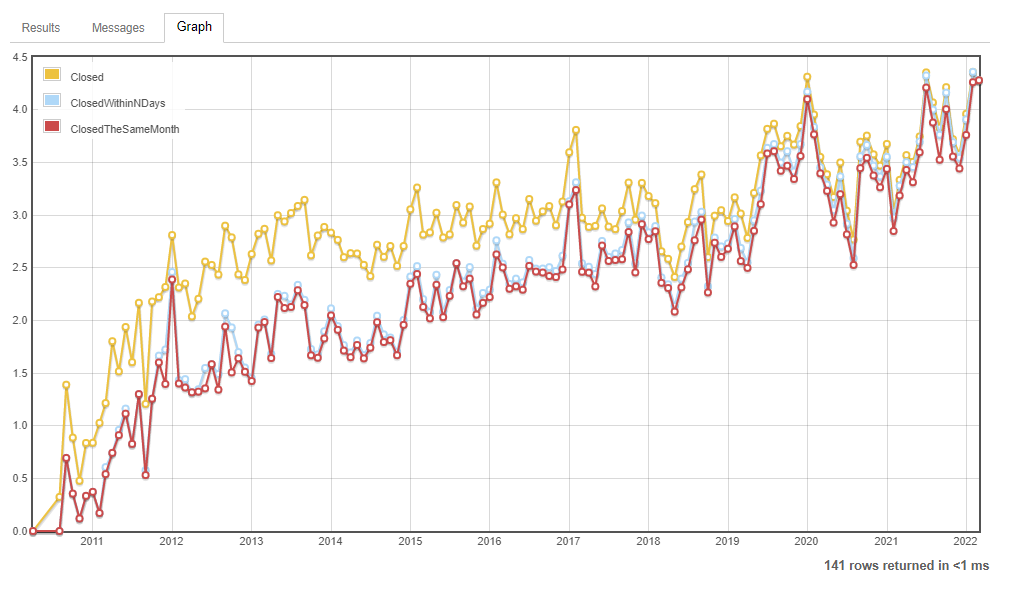 And here are the results which include the deleted posts. 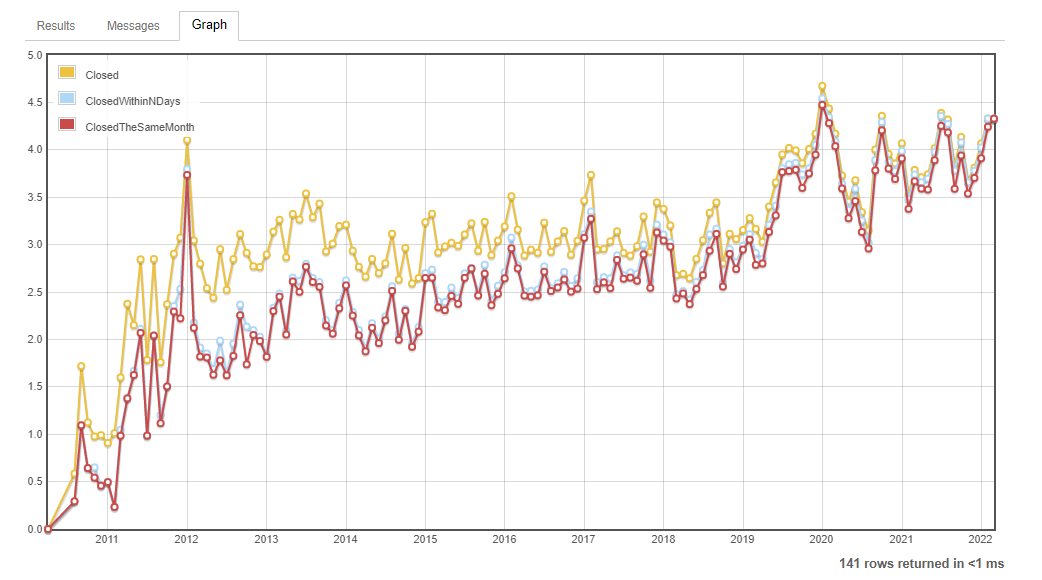 These results should be taken with a grain of salt - considering my limited experience with SQL. (Additionally to that, the queries for the duplicate closures are probably a bit clumsy - I would not be surprised if there were a simpler way to do the same thing.) But I do think that this returns what the question asks for.

Not the answer you're looking for? Browse other questions tagged support closing exact-duplicates closed-questions statistics .

15
Statistics of questions
7
Have the limits on number of questions per month/day been increased (or cancelled)?
2
Reopening a 48/2(9+3) question (ambiguous order of operations)?
2
Searching for questions closed as off-topic
7
How many questions are asked per minute on MathStack-exchange
12
Dealing with questions that the community appreciates but are yet closed
8
How can I find statistics on number of edits on math.SE?
5
How to see the questions posted in a particular month in a particular year in a specific tag
4
Measuring the health of MSE over time (in terms of activity)