I wanted to start a separate thread about the issue of LaTeX appearing bold, although Kannappan raised it in his recent question, because it appears to have expanded in scope, and because that thread currently has an accepted answer dealing with the other part of the question.

Here is a screenshot I took today (I'm using Chrome 18.0.1025.142 m on Windows 7 64-bit). This is the page where I took it so you can examine whether you have the same effect or not. You can click on image to go to a slightly bigger version. 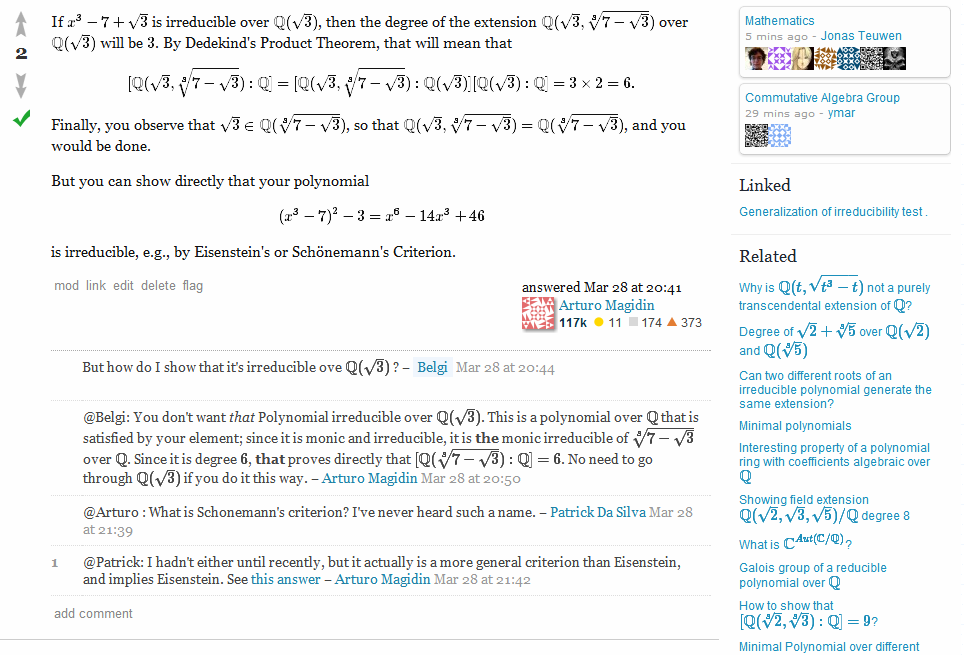 The math that occurs in the comments, and now also in the sidebar, is significantly bolder than usual (the question and answers themselves seem unaffected). I've looked at many other pages and they all have a similar effect.

I did some investigation and it seems that Chrome 18 on Windows doesn't handle the font antialiasing properly when certain text colors are applied. For example, in the comments, the color is #444, and it appears that the antialiasing is being done as though there is a darker background (rather than the white background), so the "fade to white" that should be occurring is some kind of "fade to dark" making the letters look too bold. It seems to be sensitive to the actual color (changing it to #433 makes it work OK, but changing to #443 doesn't). Similarly for the blue lettering in the sidebar.

This appears to be new in Chrome 18, and does not seem to affect the Mac version. (Chrome 18 has introduced a number of other problems as well, so I would recommend not updating if you can help it, and that means don't open the "About Chrome" panel as that triggers an automatic update.)

I'm afraid I don't have a proposed solution, but it appears to be a Chrome bug, not a MathJax or SE error.

3
What should I do when I'm wondering if there's another outage that should be reported?
7
MathJaX Bugs - `Show Math As ->TeX Commands` and Bold Math in comments

6
TeX math interacts with italic and bold formatting
10
LaTeX does not render on a user page after navigating using page numbers or changing the sort criterion
7
MathJaX Bugs - `Show Math As ->TeX Commands` and Bold Math in comments
12
Mathjax 2.1 beta
15
Should we already give up using Chrome in MSE?
3
Related questions on sidebar missing
15
Should titles be included in begingroup..endgroup (similarly as posts and comments)?