I'm seeing some TeX formulas such as $i<k-1$ rendered with &lt in HTML where there should probably have been &lt; with a terminating semicolon. For example from this question: 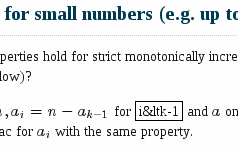 (Note: the linked question has since been edited to put the inequality outside TeX, working around the bug, but the formula at the beginning of this question still exhibits the bug).

Firefox, both Windows and Linux. (Screenshot is from Iceweasel 2.5.16 on Debian).

The problem does not appear to happen in preview -- only on the initial load of a page.

Bump: Any news? Davide's answer suggests that this should be just a matter of typo fixing.

There was in fact a missing ; when encoding < - this will be fixed with the next deploy.

I suspect that this has to do with the changes made to bring the MathJax-in-Markdown code for posts in line with that used in the previews (as described here). That code includes a substitution of &lt; for < in the mathematics, but it appears that someone left off the trailing ; in the substitution. I have checked that the preview code is correct, but I don't have access to the Markdown back end on the server, so I can't check that (and that is where the problem likely lies).

Note that whether this works or not is browser-dependent (some process the entity without the final semi-colon). I think that if the original < were followed by a space, most browsers would handle it properly. But of course, the code needs to be fixed.

9
Duplicate banner breaks LaTeX
3
Nested MathJax environments render correctly in the preview, but are broken in the final post
7
Why does not $a &lt; b$ render here?