For roughly six months or so, since around the latest MathJax deployment, the site has been highly unstable using recent Chrome versions (17-22) on Windows 7. I see guaranteed page freezes composing answers of nontrivial length, "Aw Snap" browser crashes, etc. I have lost much work while composing answers due to this serious bug. I cannot recall any other software problem in recent memory that has proved more frustrating. The bug seems to be specific to MSE/MathJax since Chrome is rock-solid on all other sites I visit.

I've been waiting patiently for a fix, but it appears that there is none forthcoming (there has been no official response from SE). Could SE folks please give some indication whether or not resources will be allocated to fix this showstopper bug? Given that Chrome is one of the browsers with highest market share (being generally fastest - as it is on MSE), we may end up losing members if the site does not function stably in Chrome.

Is anyone using Chrome 18 not encountering these problems? If so, perhaps as a community we can troubleshoot the problem and devise workarounds.

Update Thanks to zyx for reminding me in the comments that Eric Naslund reported a similar bug March 1 on MSO. Then we both were using Chrome 17, so the bug isn't specific to Chrome 18.

Similar freezes were reported on MO when MathJax 2 was deployed there (March 22). This seems to confirm my hunch that the problems were introduced by MathJax 2.0.

I have added some answers to poll Chrome usage to help determine if the bug is specific to browser or browser+OS or some more specific context. I suspect that the bug may not be widely reported here since the majority of users here may be using Firefox. However, even if so, Chrome is well on its way to gaining leading market share generally (see stats below), so if the site is broken in Chrome, the majority of users who encounter MSE through web search results may have major problems accessing the site. 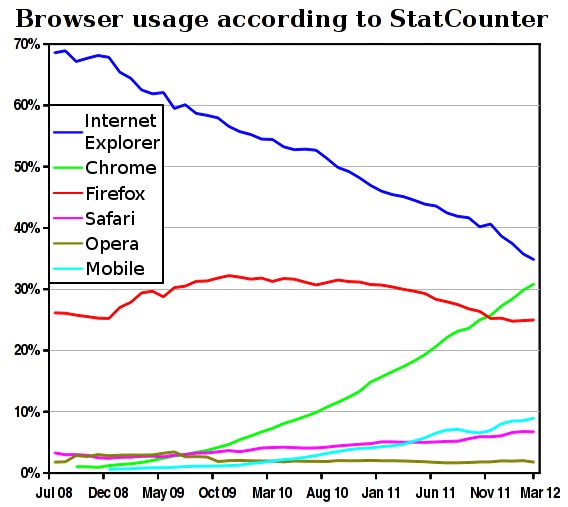 Yes, I have major problems browsing MSE with Chrome recently.

Please upvote (don't downvote!) this answer if you have made significant use of Chrome to browse the MSE main site in the past couple of months with many freezes or crashes (Aw Snap!). Please add a comment mentioning your OS, Chrome version, and any other contextual information that may prove useful for debugging purposes.

I am still unable to reproduce the problem that you all are having. I seem to be able to type answers for five minutes of pretty much constant typing in Chrome 18 on Windows 7 with no sign of a crash. I'm wondering if there is some other common factor among those who are experiencing the problem. E.g., some extension, or lots of open tabs, or some optional system component or something.

I still think that the most likely trigger for the problem is that the preview editor can replace the contents of the preview while MathJax is still processing it (meaning MathJax may try to process math that is no longer there). When I rewrote the preview code, I tried to minimize the time that that was possible, but did not eliminate it entirely, so that is still my primary concern.

Other possibilities include memory management problem within Chrome (e.g., reusing memory that has already been freed), or garbage collection problems, or other such issues. The preview/MathJax combination does put a very heavy burden on the browser, and if there are memory problems, that could likely bring them out.

To test my hypothesis concerning the replacement of the preview while MathJax is still running, I have put together a Greasemonkey script that replaces the current MathJax preview code with a modified version that prevents the editor from pulling the DOM out from under MathJax while it is still typesetting. (It does this by making a second copy of the preview, which is the one that MathJax works on, and that is updated only when MathJax is guaranteed to be finished with it. The editor is free to replace the other at any time it sees fit).

If those of you who are experiencing the problem would like to help diagnose it, please install this extension and try out editing to see if that improves the situation or not. It will affect only the math.stackechange.com and meta.math.stackexchange.com sites, and you can tell that this extension is operating if you see that the border of the preview is blue rather than grey.

The userscript actually works in Firefox, Safari (with GreaseKit), and Opera as well as Chrome (I haven't tried it in IE), but the real interest is in whether it fixes the Chrome issue. The timing of when this code runs is critical (since it must intercept the StackExchange code at just the right time in order to install itself properly); unfortunately, the Safari and Opera implementations of userscripts are somewhat variable in the timing of when they run, so it is possible with those browsers that the script misses the window of opportunity and can't install itself correctly. If that happens, reloading the page usually resolves the problem. (Opera pretty much always misses the first time through a page, but works on a reload.)

Please leave a comment here concerning your luck with this extension if you try it out. Remember that this is experimental code, so you may want to disable or remove it once you are done trying it out.

Aside: I am also working on an incremental previewer that only updates the paragraph that you are editing rather than the entire answer. That should help with longer posts with lots of math. This is a much more complicated prospect, however, since you have to get things like references (\label{} and \ref{}) and macro definitions (\def and \newcommand) to work incrementally as well, forcing updates in other parts of the answer when they are needed due to changes in the current paragraph. If this experiment with userscripts goes well, I will make the incremental preview available for testing in a similar way, and then offer it to the StakeExchange folks once any kinks are worked out.

No, I have no major problems browsing MSE with Chrome recently.

Please upvote (don't downvote!) this answer if you have made significant use of Chrome to browse the MSE main site in the past couple of months without many freezes or crashes (Aw Snap!). Please add a comment mentioning your OS, Chrome version any other contextual information that may prove useful for debugging purposes.

I am writing this answer to bring to light another strange behavior I noticed today. This bug appears related to this one and so I don't think this warrants a new question post:

I was editing an answer. That window "Aw!Snap"ped and every other Stack exchange window, (two Math.SE windows and a chat stack exchange window) died. This is a good enough evidence in my opinion that Chrome is not the trouble maker.

But, well, I am not a Tech Savvy to comment on this issue, but this behaviour looks relevant to this bug and I have brought it here for the SE team.

Hope we can get this fixed at the earliest.

Edit: I had this happen to me again today! The time of this can be had from my comment below!

Not the answer you're looking for? Browse other questions tagged support bug status-norepro .

57
The scope of \newcommand is the entire page
15
Should we already give up using Chrome in MSE?
10
MSE becomes unresponsive while I am answering questions
12
Suggestion for changing LaTeX preview/compile frequency.
14
Still having trouble with crashes when composing answers in Chrome
6
Annoying bugs when using Chrome

7
MathJaX Bugs - `Show Math As ->TeX Commands` and Bold Math in comments
12
Mathjax 2.1 beta
15
Should we already give up using Chrome in MSE?
5
Issue with zoom feature in MathJax
10
MathJax renders badly when editing from Review Queue
4
Comments containing MathJax are not being displayed fully