This sandbox is intended for saving drafts of long, complex posts, especially posts whose composition takes a long time. It serves to localize to one thread the front-page "bumps" caused by edits to drafts of such posts, so that they may be easily ignored. Also, it helps to guard against losing longly-composed posts due to system crashes.

When you are happy with your draft here, you may simply copy the code and paste it to the desired location.

Proper Use of the Sandbox

The lower bounds from those estimates are -in the view of an amateur- astonishingly far away from the actual lowest distances -as checked for $N$ of about $1$ million digits. (Of course, the only relevant $N$ are selected according to the convergents of the continued fraction of $\log_2(3)$.)

Often discussions of this topic state the general form of estimation-formulae, but don't give explicite values for the constants involved - for instance in the well-visited blog of T. Tao on the "separation of powers of 2 and 3". Naive functional estimates for such lower bounds based on heuristics would suggest small values for such constants, for instance while G.Rhin gives something like $1/457/N^{13.3}$ a naiive fitting suggests something like $.../N^1$ or $.../N^{1.01}$ instead, valid for $N$ in my mentioned range of search.
A recent guess, using $.../N/\ln(N)$ instead, leaving aside any $1+\varepsilon$-exponent at all seems to be a really good estimate for the lower bounds. However, the famous estimate for the number of primes below some number $n$ as value of the integrallogarithm $Li()$ as proposed by the young K.F.Gauss has later been proven to be not really a lower bound, but where the first counterexample could only be upper-limited by something like $10^{10^{10^{34}}}$(WP:Skewes-Number) (modern computation reduced that upper bound to $1.39 \cdot 10^{316}$, see there).

Actual computations with large exponents diverge extremely far from that given estimates so I once tried to find an own algebraical pathway to such an lower-bound estimate. My current attempt provides a lower bound which is much nearer to the empirical values than the two other estimates - unfortunately this is not based on an analytical argument but only on heuristic finding.
Here I intend to create a "biglist" of immediately usable such lower bounds and invite other readers to add information and / or alternatives to the two established estimates and to try to improve my proposed estimate with analytical arguments.

G. Rhin looks at the difference of logarithms $\Lambda(N,S)=| S \ln2 - N \ln 3 |$ and gives $$\Lambda(N,S) \gt {1\over 457 N ^{13.3} }| \tag {\text{RH}}$$ I've looked as well at $\Lambda(N)$ and propose $$\Lambda(N,S) \gt {1\over 10 N \ln N } \tag {\text{HE}}$$ To compare that bounds, we must norm for the data of $\Delta()$ or for that of $\Lambda()$. The best adaption is surely dependent on the question that one has - either using a formula involving the exponential expression or one involving the logarithmic expression. So the discussion of this should be done in the single answers of the big-list where we reference some question in MSE.
To trigger the interest, here some pictures, how the three estimates behave in contrast to the empirical values. Here I adapted the Ellison-estimate to a $\Lambda()$-version. 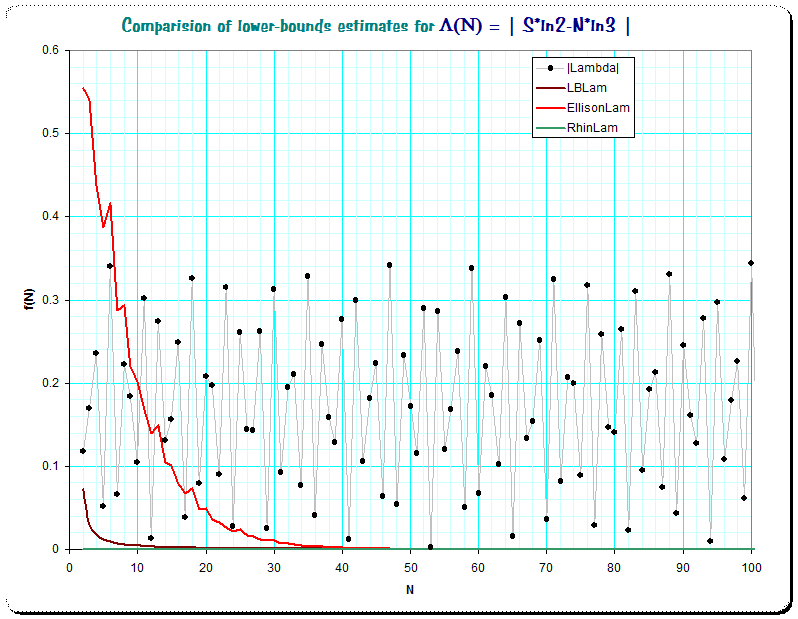 We see, that the empirical $\Lambda()$ jitter between $0$ and $1/2 \cdot \ln 2$ (blue dots), the values at $N=\{2,5,12,53,...\}$ show very small distances, and even decreasing towards zero. The idea is to have a continuous function $f(N)$ which can supply a lower bound, such that we can say $\Lambda(N,S) \gt f(N)$ .
The red curve for the Ellison-estimate is below of the empirical values only for $N \gt 17$ while the green curve for the Rhin-estimate is so near the zero-line, that we barely see it. My estimate shown by the brown curve is always below the $\Lambda()$ .
To see a bit more detail, and to get aware of the basic characteristics of the estimates, a picture in log()-scalings is more appropriate. Picture 2: x,y logarithmic scaling 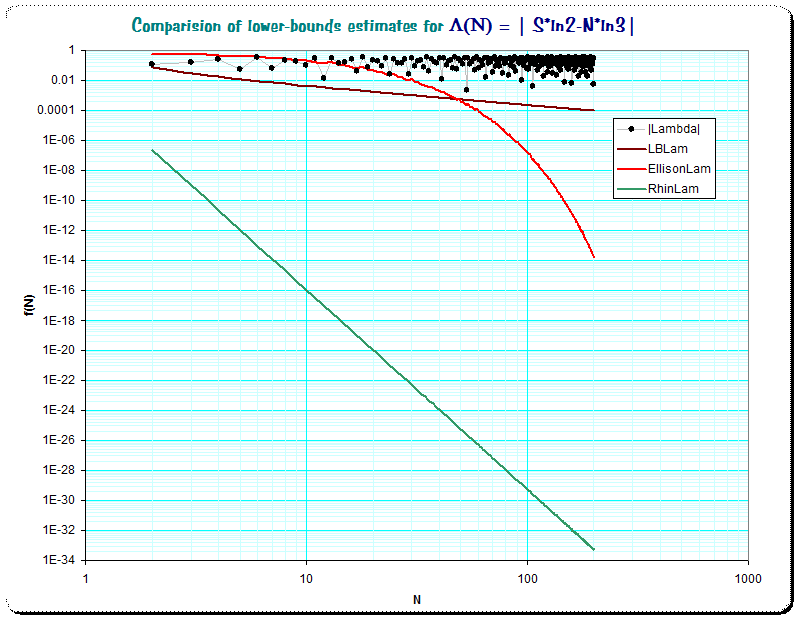 Here we see the characteristics better. All three methods of estimates work for $N$ towards $=200$. Ellison took a much different shape compared with Rhin's, and while Rhin's lower bound is unfortunate small over the whole range, the Ellison's is initally too large, then better than Rhin's but from about $N \approx 700$ it decreases much faster than Rhin's. So, for the larger $N$, Rhin's lower bound should be preferred, but for the moderate values in $N$ Ellison's estimate gives a simpler formulation and a better lower bound.
But the "LBLam"-function has the best characteristic; it is nearly parallel to a lower hullcurve, and also is valid from the smallest $N=2$ on. That this property holds forever, that means the formula is analytically useful for all $N$, has not been proved, but empirical heuristic show that it holds for all $N$ up to $1$ million decimal digits and is always tight to the most extreme small values of $\Lambda()$...
A last picture, for the aesthetical impression is the following. I rescaled the values of $\Lambda(N,S)$ to the open interval $-1[...]1$ by $w(N,S)=4 \cdot \Lambda(N,S) / \ln 2 -1$ and then show the values $Y(N,S)=\tanh^{-1}(w(N,S))$ and the accordingly rescaled values for the three lower-bound-estimates. 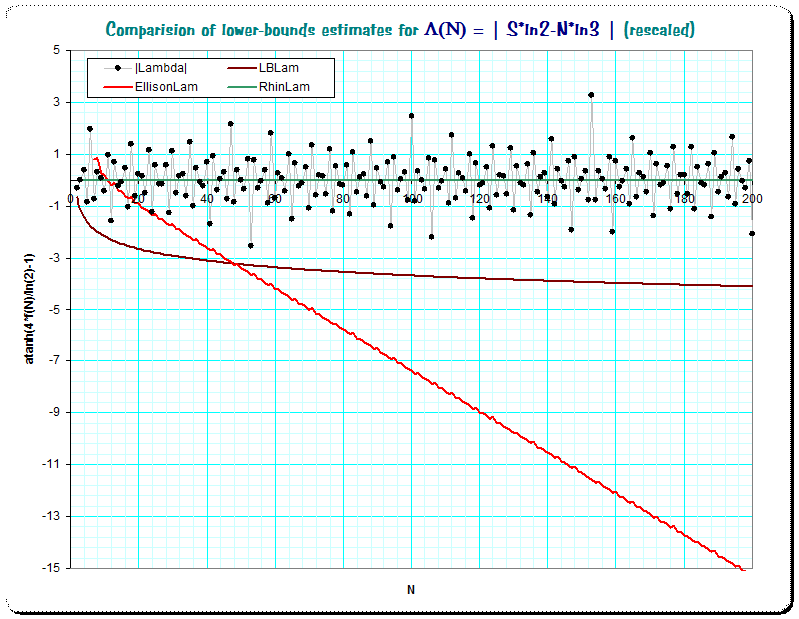 The slightly jittering effect in the Ellison-curve is because its function uses the somehow jittering values $S$ instead that of $N$ for its argument.

Wikipedia on Collatz Conjecture in Binary

A counter-argument would be something all 1s except for one "0", when 3x + 1 = all ones... Sorta. Then you have to prove that that strings of 1s doesn't turn into more zeros...

Let $g$ be a continuous function on $\mathbb R$ with the following property:

This box is free for everyone to use

This box is free for everyone to use

Detexify lets you draw a symbol on a web page and then lists the $\TeX$ symbols that seem to resemble it. These are not guaranteed to work in MathJax but are a good place to start. To check that a command is supported, note that MathJax.org maintains a list of currently supported $\LaTeX$ commands, and one can also check Dr. Carol JVF Burns's page of $\TeX$ Commands Available in MathJax.

I'm not yet much experienced with analysis of generalized Pell-equation, but part of a specific question is to find all solutions (and possibly a parametric expression) for a couple of generalized Pell-equations.
For my first subproblem I look at the set of integer solutions for $$ a^2 + b^2 = 2 c^2 \tag 1 $$ Of course, if I've found some solution $(a,b,c)$ then I've even found $(\pm a,\pm b,\pm c)$ because we deal with squares.

Fiddling with this gave the following scheme, which looks as if it would generate all solutions.

This box is free for anyone to use

Thanks for your anwer. With all due respect, I do not think that is appropriate.

Therefore, $Var(X^-)$ is not equivalent to $Var(X|X<a)$, and the given inequality may need more conditions.

The post was closed as a duplicate, but it is not. In the duplicate target, it is assumed that $M$ is a metric space with a metric topology. In this post I am asking for a general topological space. The only answer in the duplicate used the metric in an essentially way, that I don't think that can generalized here.

I was trying to solve the following problem.

If every bijection $f:M\to M$ is a homeomorphism, then every subset of $M$ is clopen.

I tried to prove the equivalent statement,

5
Sandbox for long or complicated edits.
46
Requests for Reopen & Undeletion Votes (volume 07/2018 - 12/2020)
41
Found the answer while elaborating the question. Is that usual?
33
Where is the fine line between using and misusing?
31
Is it bad to edit your own answer several times?
15
Can I post a 'homework' question without any MathJax/Latex.
3
Is answering own question okay?
29
Would it be OK to ask people not to vote up my partial answer to a really good question?
36
Cleaning up an old post of mine -- a moral dilemma
27
Catalog of limits
See more linked questions

21
How much (self) editing is too much?
2
How to deal with users padding their answers with custom signatures?
10
“Minor edit” feature for trusted users
1
Can't see all my edits
4
How to recover unsaved in-progress text from my answer to deleted question, still visible in my local client?
5
What is the recommended procedure to request disassociation from a post?
1
Why is a sandbox needed?