One annoying problem I've experienced in the past is the following: I downvote something that I think is bad but that is not obviously bad (e.g. it is not spam). Exactly one other user upvotes in response, but no more. What I strongly suspect is going on is that the user who upvotes is just canceling out my downvote and that, if there hadn't been a downvote, that user would not have upvoted. But the end result here is that

This disincentivizes me from downvoting something that I think is bad but that is not obviously bad, which I think is suboptimal.

Almost two years later, it does not look like SE is going to do anything about this. Enabling this for everybody would be forcing too much information on users who don't want it. For example, Physics Overflow site has this display (they run Q2A software), and I am not wild about it. On the other hand, making the separate display a user preference would be against the SE tradition of "we generally don't do preferences".

So, I wrote a Smart up/down vote display script, which (sort of) fulfills the request: 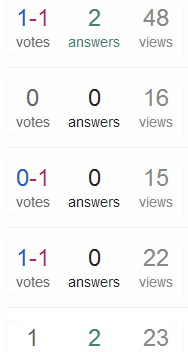 Not every count is split: only those where there are downvotes. And even then, downvotes on posts with net score 5+ are not shown. The red numbers can be taken either as a sign to stay away from the question, or to jump in and take an action.

The script is distributed as a Chrome extension. The source code is available (JavaScript with no browser-specific API), so it's possible to adapt the script for other browsers.

Hence, a bookmarklet: New questions with a downvote. Nothing to install. Works SE-wide. Clicking it on any page of the site, you should see it replaced with a simple bullet list of new downvoted questions and their scores. The script looks at the newest $100$ questions, which at current rate means it goes about $5$ hours back in time. Closed questions are marked as such.

Not the answer you're looking for? Browse other questions tagged feature-request user-interface voting .

50
A minor gripe about upvoting things that have been downvoted [pity upvotes]
2
Giving more downvotes than upvotes?
13
Point difference between upvotes and downvotes
16
Net gain for a poor question
6
PSQ feature request
27
Is this targeted voting?