Voting to reopen question on a remark of Novikov

This question has been closed as "not constructive"; it asks about a quotation by an unnamed, but famous, topologist from the 1970s to the affect that "algebraic topology is dead". As Bill Dubuque noted in a comment, it is not hard to google the quote and find it attributed (by Hitchin) to Novikov.

I had not heard this quote before, and investigating it by googling, I learned a lot of interesting history of mathematics. Thus, personally I found it a very constructive question. Furthermore, I think that it will admit reasonable answers. I have thus voted to reopen the question, and I invite others to do so.

The FAQ rather clearly states

You should only ask practical, answerable questions based on actual problems that you face. Chatty, open-ended questions diminish the usefulness of our site and push other questions off the front page.

The question in its original form amounted to "Why could somebody at some point in time think that algebraic topology is dead?" Even that is not so clear, since "dead" can have several meanings. The question was basically an invitation to write "I think algebraic topology sucks because..." That one can learn something useful when googling it is IMHO not a reason for making it constructive. Good questions and good lists of keywords are not the same thing.

Now it turns out that the source of the quote is "easily googled." It is due to Novikov, an influential algebraic topologist and that could provide a basis for an excellent questions. One might be interested in the historical circumstances around algebraic topology in the Soviet Union. One might be familiar with the biography of Novikov and have trouble relating it to his life. One might be familiar with writings of Novikov and therefore appreciate his perspective and want to understand it better.

These are all quite different questions, and it is not clear which one is the intended one. Moreover, I don't see any sign that the OP was really interested in any of these questions. It was after all only that other people commented that they think such a question, which is completely different from the original one, might be worthwhile. The OP has not shown in any way that he is really interested in any of these questions.

Coming back to the quotation from the FAQ, I think the "problems you face" part does matter. I could post a lot of mathematically interesting questions by looking at the blogs of notable mathematicians and whenever I see them posting "It would be interesting to know if..." post it as a question on MSE. I don't need to actually understand "my" own question in order to do this. The edited question doesn't demonstrate any interest but not getting closed, and that is IMHO just not enough.

For full disclosure at the prompting of Asaf, here is the full transcript of comments from the post (the red shaded ones are deleted by moderator). It is too verbose to try to copy/paste/reformat everything, so I just took a screen grab. It will be more legible if you click through to the full sized images. The time should be measured w.r.t. to the creation time of this post. (The creation time of all the comments on the first page are listed as "1 day ago", so I omitted them from the screen shot.) 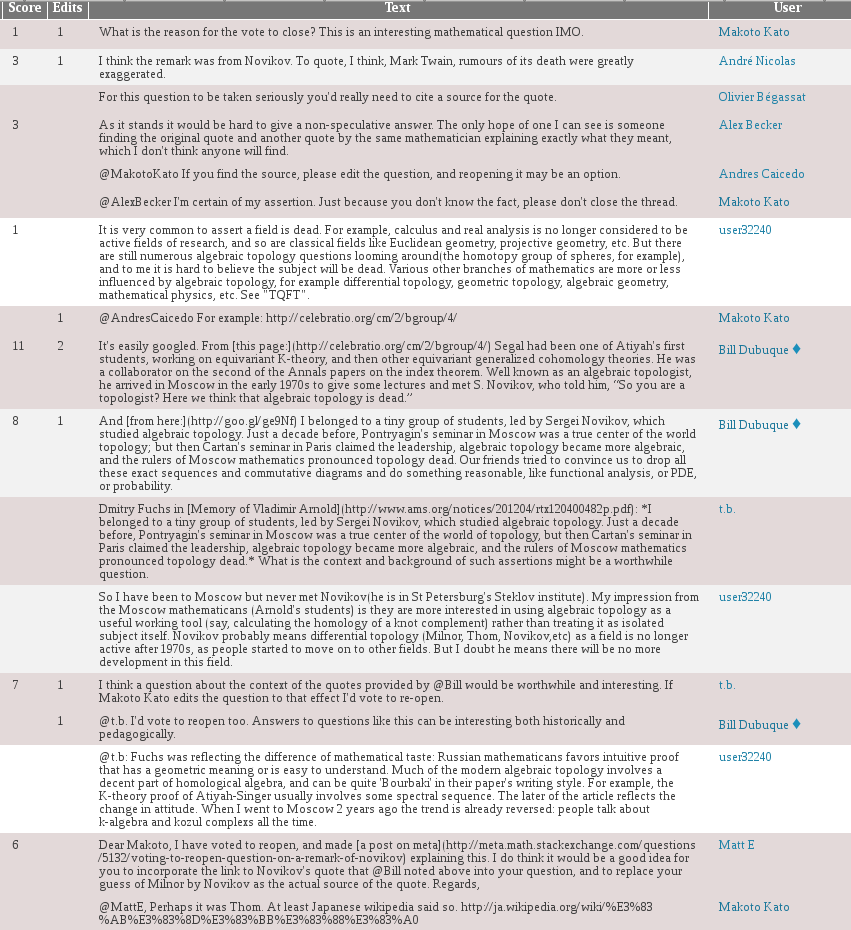 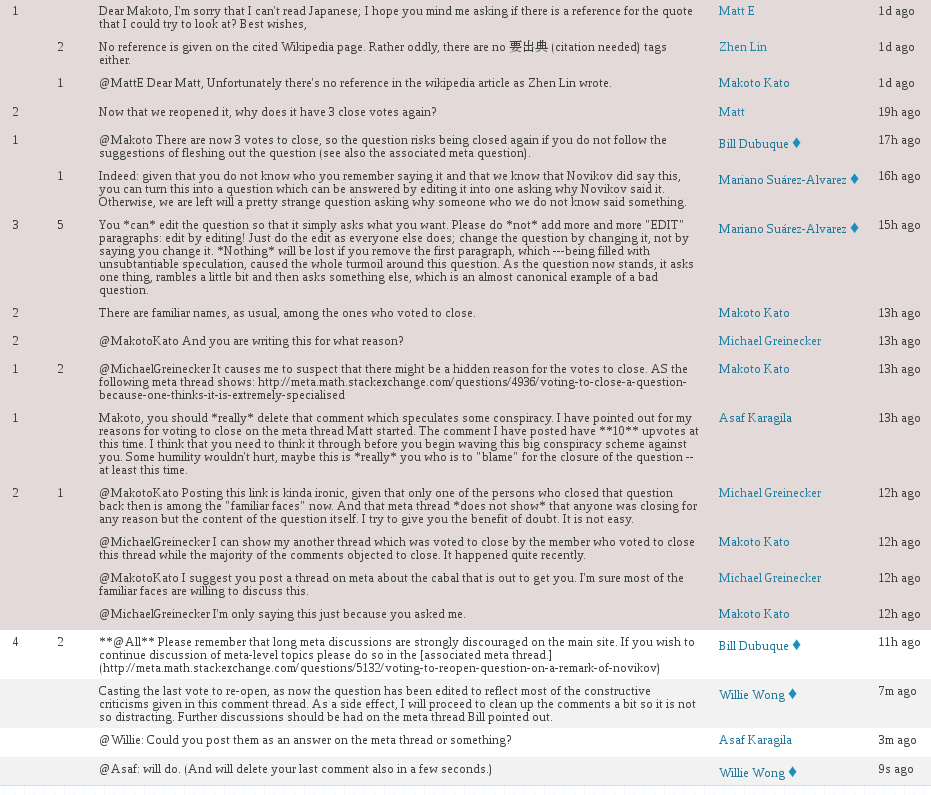 Not the answer you're looking for? Browse other questions tagged discussion re-open .

19
Closure wars are caused by asymmetrical close/reopen voting process.
6
Deleted question remark
11
Can we reopen question about predicting next number in a sequence?
0
voting to reopen
3
Scaling votes for closing (and reopen) a question
0
Why is reopen queue empty, if I voted for a question to be reopened?
19
Up-voting a question while simultaneously voting to close it
6
What should a $<3000$ user do when a question is good enough to reopen.