Is this the longest answer on the site?

I understand that there may be incompatible measures of length, especially when Latex and open space are involved. I have sometimes posted jpegs, I think those should be counted as fairly short because the effort was not mine. This one is a pretty good candidate, and we should give credit where credit is due:

How to determine with certainty that a function has no elementary antiderivative?

EDDDITTT: Now that I have looked at a few long ones: I suppose we cannot really measure the amount of time spent by the person answering. However, I can say that Raymond's answers score big in this department: how many seconds does it take the Latex to render, from the instant you open the question?

EEEDDIIITTTTT: Yes, I think that is the way to go. Joriki's top-of-the-charts sits there for about 15 seconds, but then suddenly renders it all. Raymond's new one gets started sooner but takes about 35 seconds to make it all the way through, as I scroll down I can see the new bits going from pre-Latex (gray) to rendered, so I know that the whole thing has not yet been finished.

EEDDIITTEEDDIITT Monday December 31: The beginnings of an explanation. My two very long posts are mostly some C++ output I pasted in. I actually remember re-running the program because the answer page told me 30,000 characters was the maximum. Here is the "trick," such as it is. Raymond's new answer, currently fourth in the ranking, has dozens to hundreds of separate Latex items. The peculiar thing about Joriki's top post is that it is just four separate Latex array items, each very, very long, and overall quite repetitive. So the system probably expects the number of separate Latex items to be comparable to the total mass of Latex characters, and, in short, allows extra character length if there are very few dollar signs.

EVEN MORE EDIT: I copied Joriki's answer and posted it as an answer to For which primes $p$ does $x^2-31y^2=-p$ have solutions? and the system accepted it just fine. I guess I will delete it in a bit, after a few have seen it. Evidently it would take days before Asaf's long-post-search query would notice it....I did delete it, then edited the source down to one line of gibberish. The odd final outcome is that it will not let me add another answer at the same question. So perhaps you can get away with one long answer this way, but it won't permit a second.

To answer the title question, as of today, December $30^{th}$ $2012$, the answer you linked to is the fourth longest answer on the site as measured by the number of characters.

See the data query which appeared in Asaf's comment.

The SEDE query linked to in Asaf's comment and Eric Naslund's answer is somewhat misleading because of the way the SEDE data is provided. Specifically, the Body column in the Posts table is the rendered HTML, not the bare Markdown. The difference between bare Markdown and rendered HTML is why it is possible that the SEDE thinks there is a 50,000+ character answer, even though there is a known limit of 30,000 characters for posts. Bare Markdown is saved in the Text column of the PostHistory table, provided you are looking at the right PostHistoryTypeId.

(Interested readers can learn more in the Database schema documentation for the public data dump and SEDE from Meta Stack Exchange.)

Some enterprising soul has provided a new query to get the longest answers by Markdown.

Of note, joriki's answer doesn't even crack the top 100 in this new query. It achieved its long HTML rendering because the apostrophe ' character from the Markdown was replaced with &#39;. Some 9000+ instances each expanded to five characters.

Here is the beginning of the list arjafi found, longest answers by Markdown. Six of the top sixteen are me. This is consistent with my experience in elementary number theory, if you have no idea what is going on, see what can be computed, look for patterns, maybe some of that can be proved.

Another area seems to be fractional iteration, it is a big job, given a function $g(x),$ to find a function with $f(f(x)) = g(x),$ at least in a semi-infinite interval in the real line. 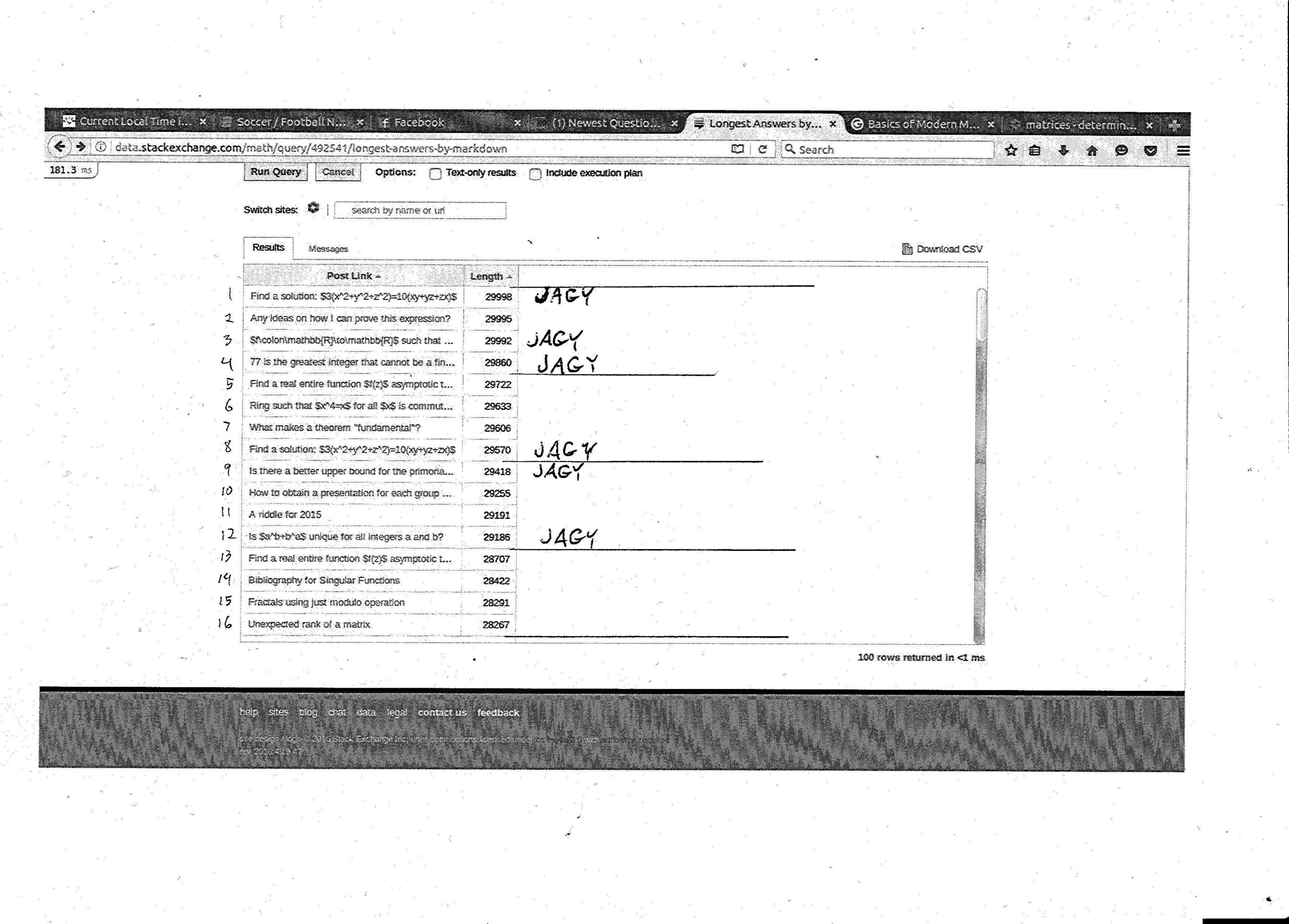 3
The upper limit on the size of an answer

4
Comment policy in the FAQ
22
What is the standard for upvoting an answer you don't know is correct?
35
Rapid replies and top-heavy voting
32
What should one do if they see extremely fast reviewing?
46
Statistically, how does question length relate to community response?
23
Was I right to answer this question this thoroughly?