This thread is used to record significant events in the life of Math.StackExchange.

What should be recorded? Creation of the site (proposed, beta tested, graduated). Technological innovations like TeX support and chat. Chronology of moderators. Base-10 milestones ($10^k$ users, $10^k$ questions, etc). Probably something else that I can't think of now. But nothing subjective or potentially inflammatory.

How could it be useful? Newcomers to the site will have a way to satisfy natural curiosity. Wikipedia editors will have a convenient source of information about Math.SE. Users reading old meta threads will be able to interpret them properly, knowing that a certain post was written when its author was/was not a moderator. Former moderators will have their work formally recognized.

July 2010: Math.SE enters the beta phase. The first question was What Does it Really Mean to Have Different Kinds of Infinities? At least 60 users actively participated in the private beta (July 20-27). The most active users during the public beta phase (July 27-October 25) are listed here.

October 2010: The site graduates from beta and gets its own design.

November 2010: First "Great Answer" badge awarded to Qiaochu Yuan for Mathematical difference between white and black notes in a piano.

December 2010: First "Great Question" badge awarded to user Chris for Why can you turn clothing right-side-out?

December 2011: $\TeX$ support for chat is introduced by robjohn.

July 2013: The site becomes third on SE in the number of questions; first time an SE 2.0 site overtook a member of the original trilogy (ServerFault).

November 2013: The site becomes second on SE in the number of questions, trailing only StackOverflow.

August 2014: The homework tag is burninated and blacklisted.

Those who have served as site moderators

(Look at the source of this post for the $\LaTeX$ code that generated this image.)

According to my screenshot, the 1 millionth question was just posted today by Firat Celebi 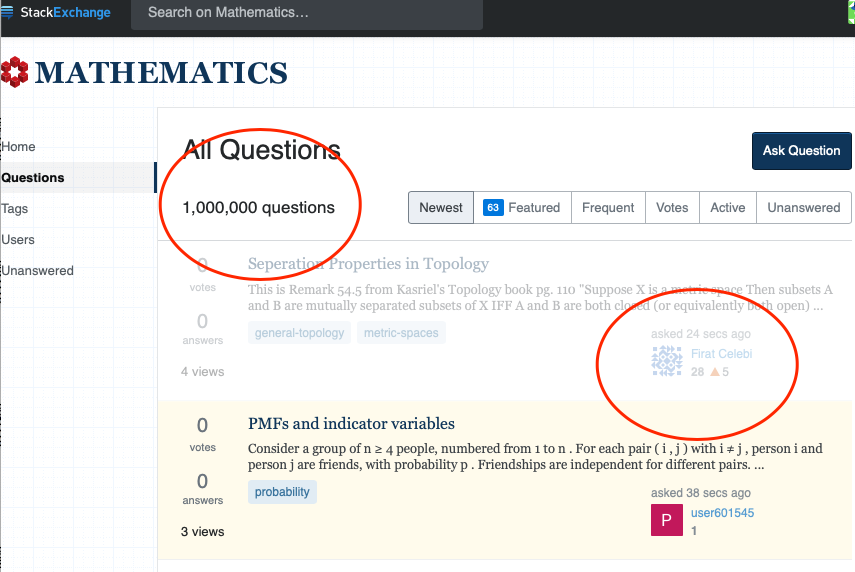 Sadly, like those counts of who is the millionth person to walk over a bridge, I don't think there is actually any definitive answer to such a puzzle: does one include questions that were deleted, or re-opened, or which were test posts, or duplicates etc etc etc (or in the bridge analogy, what about the person who walked half-way, then turned back etc)