Late answers - a mechanism for getting a fair share of upvotes?

It is a not unheard of phenomenon that answers don't get much upvotes in the following scenario:

First, a user asks a non-trivial question, which turns out to be non-trivial enough not to get an answer for a while.

Then, the question lands in the big heap of unanswered questions, where it does not receive much attention.

Finally, some user digs up the problem, devotes some of his time and energy to come up with the answer, and posts it. By now, it's probably only the OP who pays any attention (or maybe not even him).

The answer gets accepted, upvoted by the OP, and forgotten.

The net result is that much work is rewarded with some +20 rep, or maybe less. A situation in this spirit was discussed for instance here (but in a somewhat different context). This is in contrast with what happens with comparably easy problems where an immediate answer can earn more rep with much less effort.

I do realise that upvotes are not precisely the point of MSE, which is to generate good quality answers to mathematical questions. However, I am afraid that some users may be discouraged from posting late answers, because answering the easy ones "pays" better. This could result in there being a lot of answers to the easy problems that don't bring much new to the site, and with some interesting problems being left unanswered.

Is there some mechanism that could help such situations to occur less freqently? For instance, if there was an accessible list of questions where the question got much more upvotes than the accepted answer (perhaps with the extra condition that the answer was given relatively late), I would be happy to look through it and upvote under-appreciated answers if I happen to see any. But such query is rather too specific for the MSE search engine, isn't it?

I see that the "review" tool has the category "Late answers", but it apparently applies only to the ones by "new users", and seems not to be used much. (I, for one, have no possible reviews in this category.) Perhaps it could be considered to extend this feature? For instance, "Late answers" could also include late answers from experienced users, answers that got relatively little rep (my gut feeling is that if question deserves $x$ upvotes, then an accepted answer generically deserves at least $x/2$) or little attention, and so on.

(Disclaimer: I do not hide that I posted some late answers recently. It's not that I feel they are of particularly high quality or that they are not appreciated enough. It's rather that this served to direct my attention to the general possible problem.)

10k users have access to New Answers to Questions More Than 30 Days Old. Here's an example of one of your answers on the list: 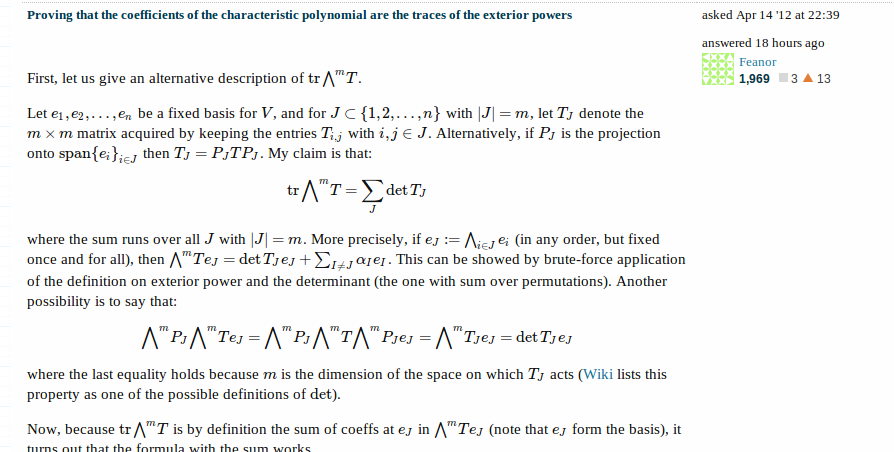 It is a bit hard to find, but if you go to the 10k tools and click on the "stats" page.

At the bottom of the page, there's a list of links. One such link is the above:

How about if the site were to add a new reward feature, whereby users with a reasonable number of points and the person asking the question are able to mark an answer as a 'major contribution'. Unlike the bounty, which is basically a transfer of points from one person to another, this would be a reward that is judged.

The idea is, the answer is marked as a 'major contribution', which then has to be reviewed by those with sufficient points, etc, and if that contribution is judged worthy, then the answer can be given an extra points boon, and perhaps featured on a separate list of questions with major contribution answers. On the flipside, there could be a small punishment (-10 points, or something) for users that try to suggest very minor contributions (like explaining a basic application of integration by parts, for instance), where the answer is clearly nowhere near being a major contribution, to keep people from spamming it (answers lying between the two extremes would simply be marked as "not major" and would continue as usual).

It should help to give more attention to answers that require more work, that answer a difficult problem, and that might otherwise go unnoticed. It would both further encourage people to work on the hard problems, and draw more attention to the resulting answers - not just to have more chance of direct upvotes, but also to better showcase the use of the site itself.

Anyway, it's just a thought. Even if people don't like it, it might spur some alternate ideas.

Even new Answers which have few (or no) competing Answers on Questions of moderate difficulty may suffer in respect of getting less voting than more easily understood Q&A's. Certainly in my experience the Answers that I've toiled over are not the high vote count examples, but rather the short but perhaps surprising items, maybe because easily taken in at a glance.

I don't think there's anything to be done about this. At a fairly early met threshold the real reward for doing your best on Answers is not votes, other than perhaps the few garnered by the OP and others who try the Question for themselves, but the improvements to your own understanding and powers of exposition.

Also note the thrillingly named Necromancer Badge (silver), as a reward for netting as few as 5 votes on Questions over 60 days old. "This badge can be awarded multiple times."

12
Should you rep someone's other posts to thank them?
25
upvotes for question but not for answer
-1
How to Unhide New Answers to Old Questions?

16
Getting more and better answers from more of the users on the site.
4
How general should an answer be?
12
Should you rep someone's other posts to thank them?
0
Does getting two upvotes very often denote serial upvoting?
57
The late answer review queue for "Late answers from new users"
1
Does a quality answer depend on a quality question?
1
Why does the acceptance of an answer not imply an upvote?