Could Community Bulletin be used for reminders about correct tagging and other good practices?

I have noticed on another SE site that they have put a reminder about correctly using one of their tags, which was not entirely clear.

I do not whether it is possible to link to the community bulletin or how to do it, so I'll post a screenshot: 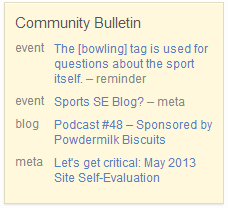 It was linked to the list of questions with the given tag, which shows the tag-excerpt on the top of the site.

From what I read on meta.SO it seems that mods have possibility to add events to the Community Bulletin. (I suppose that most of the content of C.B. is created automatically, without any human interaction.)

Community events are not the proper way to achieve this, they have a specific start and end date and are just not meant for this purpose. They also show how long the event lasts in the bulletin if I remember correctly, which would be very confusing if they were used like you proposed. But if a moderators wants to put up a specific meta post on the community bulletin, they can tag it as featured and it will show up there. There are some time limits involved as far as I know, but I'm not sure about the specifics.

But I think that this would not be necessarily a good idea, there are a few drawbacks:

Not the answer you're looking for? Browse other questions tagged discussion tagging best-practices community-bulletin .

21
Should the algebra tag be blacklisted?
16
Should questions on (matrices) and (matrix-equations) be also tagged as (linear-algebra)?
7
About (regularity) tag for PDEs
19
Do we need more [stability]?
6
The tag even-and-odd-extensions
6
Linear algebra and linear equations are sometimes confused
6
Adding reminders on posts